Experiencing 9/11 Outside The United States 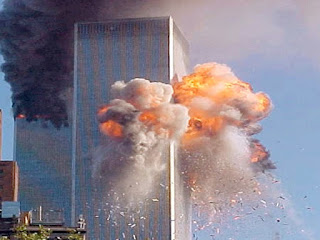 A lot of folks have asked me to share what it is like being outside the US during recent events.  After giving it some thought, I have pieced together the following, and I am sending it on to friends and family.  I hope this lets you know that the world is still a caring place, for the most part, and that we are all safe and secure.

On 11 September, I was in class when the announcement was made about the first crash. None of us could believe it.  I grabbed my cell phone and dashed to our security office from the classroom.  I arrived in time to watch the second plane hit - I was dumbfounded.  My brain could not digest that this was real and not some special effect.
I left the security office to head upstairs to the situation room to notify them that I was locking down the network to prevent any problems.  After about 15 minutes there I walked into the Colonel's office to brief him.  As I walked into the room, I heard the announcement about the Pentagon.  This was so unreal.  I was in a daze.

I had no fear for my youngest son, he was on the base and secure.  My older son was at work,  just around the corner from his brother.  The only real fear I felt was for you folks in the US and those folks in uniform I had worked with for 20 years. I also had a very odd feeling because this was the first time in 20 years I was in no way connected to what would be the "military reaction."


Like most of you, we all spent that night and the next few glued to the TV set to see what new information was forthcoming.  Armed Forces Network (AFN) was giving us a live CNN feed.  We, like you, were looking for something --  anything that would lend a bit of hope to the darkness.   I found some of that hope in the German people of our city.


The night of the 11th I was taking the trash out when two of our neighbors, who I had not even met yet (we had been in the house 11 days), came by to express their condolences and to tell me that their prayers were with America.   While walking downtown,  a man of apparent Middle Eastern descent comes up to apologize for the acts of the "insane and evil" among his people.  Most of all he wanted me to understand that it did not represent his people and that I should not hold it against them.

The base went into lockdown mode.  As some of you know, I do not work on the base itself but in the American Arms Officer Tower downtown.  Within a few days, we all got used to the ID checks, car searches, and other obstacles in place to keep us safe.   About two days after the crash I started to notice the flowers appearing at the main gate,  which had been totally locked down.  I started making it a point to go by there, and as days passed flowers, candles, cards of encouragement, and flags (American and German) all appeared.  I took time to read several, and most said the same thing "We are with you,  we are one."  I had found some hope, a bright spot that made it all a little easier.
Several huge silent candle-lit marches went through the city, ending in services at the various cathedrals in town.

We went on a Volksmarch (sort of an organized stroll through the forest) the next weekend, and IVV was collecting money for American Red Cross and signatures for a card to be sent to New York.  I think this is the first time I can ever remember hearing about or seeing a foreign country giving to America instead of the other way around.
In recent weeks there have been two other events here in Wiesbaden that connect to the WTC tragedy.   I am telling you about them so that if you hear about them later, you do not feel any worry.  The person thought to be the "money man" for al Qaeda was arrested here.  Keep in mind that Frankfurt (20 miles up the road) is the financial capital of Europe, so it is not out of line for this guy to be living here.  It is about the same as finding a stockbroker living in Newark.    One item of comfort:  since this was a money laundering operation, the business end was kept far away from it to keep it looking legitimate.
The other incident was an Anthrax scare at a local Shell gas station. The substance was tested and found to be plain old cocaine.  How's that for relativity - feeling relieved because it was cocaine?

The worst part of being here during something like this is not feeling insecure or fearful.  The worst part is feeling disconnected from your people - those that share the experience and feel the pain.   It feels that way here to a small degree.  For the most part, the sincerity of the words "We are with you,  we are one" from the German people provides that comfort to us.  From what I hear similar experiences are being had by Americans in England and Italy as well -- too bad it takes a disaster to bring us all a little closer together.

That's all the news from Deutschland for the moment.  Everyone is fine and well and doing great.

Posted by Charles Schell at 20:08 No comments: