Note: When I started this blog, my intended goal was to explore my experiences as I started riding again after a long hiatus. To a large degree, that is what I have done. I also had an underlying desire to pass on things that I have discovered in my life or have experienced in getting to where I am on the calendar. This entry is more of an essay about one of those things then it is about motorcycles, although there is a whole paragraph about motorcycles below. I hope you enjoy this.


Now and then, when I take time to reflect on things that I've done or decisions I've made, I wonder why more often than not I have allowed myself to say “No” rather than “Yes”. Now granted, sometimes “No” is the most appropriate answer: "No, you should not use steel wool to wash the new car", "No, you can't put your sister in the trunk even if she fits", and so on. However, there are plenty of times when “No” was just the easiest answer rather than the response that I really meant or that would've opened a new door for me. Therefore, when I take time to think about it I wonder how much of life we are all missing because “No” is just plain easy.

Before you say to yourself "wasn't there a movie about this?" and stop reading this essay; I will tell you that “Yes” there was a movie about this. It was also very funny, and not even close to what I'm talking about here. In the movie, the protagonist always has to “Yes” to everything. What I am proposing is that before you answer; take a second to consider what the question is, what the ramifications are if you do say “Yes”, and what you're giving up by saying “No”.

(Leading with this topic was a simple choice since it is where many folks went when they read the title of this piece.) It is very easy to put this in a sexual context of “Yes” and “No”. Amazingly enough, when considering that “No” is easy you have to recall that what we learned in high school was that girl who said “Yes” was easy. If we consider how many times we have avoided physical intimacy just because “No” was an easier answer, wouldn't this be a great place to start to change that? In your mind turn things around, consider “Yes” as your automatic answer, and “No” as the one you really have to think about and plan.

I once had a very wise lover tell me "I don't get some people. I mean it feels so good...and it's free...and did I mention that it feels so good?...Why isn't everyone doing it every day? I just don't get it!" After the voices in my head stopped cheering for obviously selfish reasons, I started to consider what she might be saying underneath those words. In the end, I think the lesson to be learned from those words is: why have we made something so good and so pleasurable so complicated that saying “No” is the easier answer rather than saying “Yes”.

I am not suggesting that we all become hedonists or Libertines, what I'm suggesting is that we overcome our Puritan background and consider letting ourselves enjoy the pleasures that life can bring - and I do mean more pleasures than just sex. I would have to think if you are in a situation where an answer became necessary for a question about intimacy, you have allowed yourself to get into that situation. That being the case, why wouldn't “Yes” be the appropriate answer?

(Note:  Now that I have considered the sex question, I will now set about losing the male portion of my reading audience by looking at other parts of life where we should consider saying “Yes”.)

I have an acquaintance at work, who asks me to join him occaisionlly to enjoy a beer or pizza after work. My life tends to be fairly structured and I like to go straight home after work so that I can work out and get dinner started. “No” is the easy answer. In order for me to say “Yes”, I would have to work out a bit later or skip that day and maybe pick up dinner on the ride home, if he and I were not sharing a pizza on that particular occasion. The effort to say “Yes” is just not that hard and in exchange I'll get: Spending a few hours with a co-worker, enjoying his company, and making lewd comments about the waitresses. Next time, I'm going to say “Yes”.

Say “Yes” to the Scary Things:

When I realized I was turning 50 (only had 5 decades to see it coming) I started looking at different things in my life that I wanted to do before I exited. One of them was to start riding again. Saying “Yes” was not easy at all: I had to be reacquainted by taking a class, pick up safety gear, steel my confidence and buy a bike. However, because I did say “Yes” I have a lot of great memories of the past year of riding and plan on stacking up even more this year and in the ones that follow.

In my case, saying “Yes” actually involved taking on real added risk but that risk can be reduced with proper equipment, training, and doing things the right way. So when you say “Yes” to the scary thing, also say “Yes” to try to reduce the risk associated with it.

Say “Yes” to the Hard Stuff:

As I've gotten older, people have started coming to me as a source of both sage advice and experience when needed to address specific problems. At work, these are usually called "opportunities to excel" in real life, this is known as volunteering. In the past few years, I have said “Yes” to several things that take up time and cause me extra work. They are not easy in terms of time or effort usually it is hard stuff. I could've turned these things down which would've been easy but I didn't. Instead, I said “Yes”, took on the extra effort, and reaped the rewards of knowing that I can truly make a difference and that they appreciate my skills and experience. In hindsight, saying “Yes” was actually easier than saying “No” because there was such a huge benefit to saying “Yes”.

Don't Accept “No” From Others:

If you start to turn your life around and start making the hard choice by saying “Yes”, you are going to start looking at decisions others make and wondering why they are not doing the same. Ask them. In many cases, you will find that there is something minor in their way. Ask the questions that allow you to find out the basis for the “No”. Sometimes you can remove whatever is blocking them and turn it into a “Yes”.

I once had to hand a worker a very difficult assignment and their response was “No”. I spoke to them about it and kept talking until the real reason for their “No” came out. I won't go into it here, but the reason was
trivial and with a single phone call, I was able to remove that roadblock and get them to say “Yes”. The extra effort was so worth it.

This tactic can be used with your friends and others -- take a minute to listen.

I don't mean to come off like the Wise Master talking to the Grasshopper in Kung Fu, I am just trying to share a vital lesson that I am only now beginning to appreciate. You have to learn it on your own. All I want you to try is giving “Yes” a chance. For the next few days, pause before you say “No” to anything – – then consider if this is just the easy thing to do or is it what you really want to do. I think that if you change your mind just once you have gotten benefit out of the words that I've written. If it turns into something that changes your life, I will consider these words a success.

Surviving The Ravages of Winter

It has been just over a month since I've ridden. When I have had some time to let my mind wander, I have allowed it to recall some of the rides I took over the summer. Good memories. Can't wait until it gets warm enough to take the bike out again.

I backed her to the garage door the other day and fired her up. Well, first I had to charge the battery for 20 minutes then I fired her up. What a sound. A lot of people talk about the Harley sound (which is distinctive) or the sound of the Valkyrie (which once heard is unforgettable); both of my Honda’s have rather pleasing rumbles without being too rude or noisy. I sat down on her for a few minutes, feeling the vibrations of the engine and the welcome fit of the saddle. Wonderful.

I have been reading some reading stories lately and they all mention “muscle memory”. Basically, it is your body remembering and reacting to tasks that it has done repeatedly in the past. When riding it is what allows you to get better and more confident the more you ride. I am wondering though, how much of that do you lose over the 3-4 months of the year when you can’t ride. 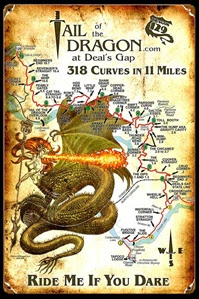 When skiing season started every year, I would take the time to confirm my skills before going on the harder runs. I would do 3 or 4 runs on each level of introductory slopes before moving up in difficulty. This was my way of insuring my skills were still there and how I insured I knew what my body changes over the summer were going to affect my skills (weight loss/gain, age, or injury). As I start thinking about the start of the next riding season (now 71 days away), I am starting to consider what I should do to get into the groove again.
I took some time to look over my plan for developing skills that I used last year and I think I may already have a blueprint to get me in back into the saddle safely and confident in my skills. Of course, I will move through the levels somewhat quicker since I am sure some muscle memory remains.
Planning on a run to the Tail of the Dragon with my son and some friend in May, if all goes as planned. It will be a great weekend of riding and a terrific memory too.
Come on spring!