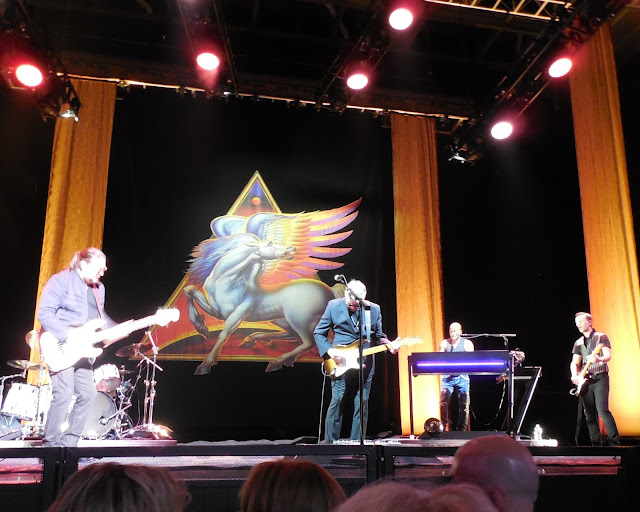 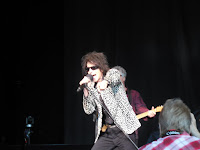 Warm up acts generally fall into two categories:  Those on the way up and those on the way down.  I have never considered them a vital part of deciding to see a show or even part of the overall experience.    Peter Wolf may have changed that for me.

I had never heard the name before as a solo act, but I was familiar with the J. Geils Band that Wolf sang lead for during their years at the top of the charts.  When he took the stage I was a little surprised.  He was rail thin and even with large shades to cover his eyes; I could tell he was older.  Then Wolf cut loose. 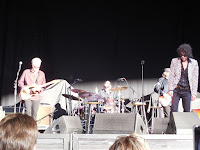 His voice was strong and true on every note.  It did not occur to me until he mentioned during the intro of a song that he had once done a duet with Mick Jagger -- it is Mick's vocals I was hearing!  Wolf's dancing around the stage sealed that image - he did all the Jagger moves except the rooster walk.  But to say he was channeling Mick would be to take away the unique spin he put on every note.  Similar genre but Wolf's own style would be accurate. 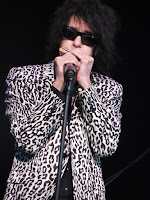 The song list was a mix of songs I had not heard before and hits from his J. Geils years, except Centerfold.  I really expected it but it never came -- not even as an encore.  His harmonica playing was also spot on -- and not something that was drowned out by the rest of the band.  Wolf was having a good time performing and was connected to the audience.  A great set.

This warm up act, did indeed warm me up for the main show.  It was an appetizer that had its own satisfaction.  Apparently, the headliner thought Wolf's show was good too; as I spotted Steve Miller standing just behind the sound guy offstage enjoying Wolf’s performance. 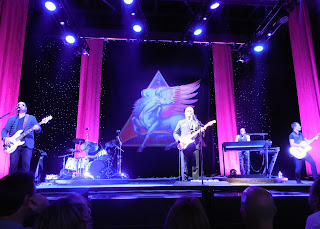 I know nothing at all about Steve Miller the person.  In fact, I can’t recall even seeing a picture of him until at least the late 80s.  It never mattered, because what I knew about Steve Miller was in the music that he produced. The very first CD I ever bought was The Steve Miller Band’s Greatest Hits 1974-78 (German pressing).  It was phenomenal. If I had it on vinyl I probably would’ve worn it out because the number of times I replayed it. I knew probably 75% of the music that was on the CD, the other 25% I came to love. That is why this concert was a great lead in to my Summer of Live Rock & Roll. 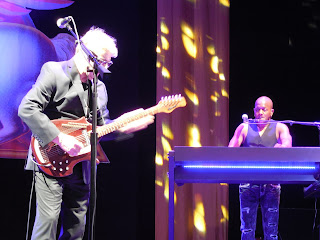 My SMB favorites were the same favorites that everyone else in America had…the songs that made him and his band famous and led to their recent induction into the Rock ‘n Roll Hall Of Fame.  What made things just a little bit sweeter, was the fact that I found out a few months before the concert that I had a direct connection to his band.   His keyboard player for just over the last two decades was Joseph Wooten, whom I went to high school with. In my senior year of high school, he and I played the accompaniment for fellow student Beth Harper, as she sang  Linda Ronstadt’s Long, Long Time.  He was a great keyboardist then, and even more so now.  But enough gushing, let me tell you about the concert. 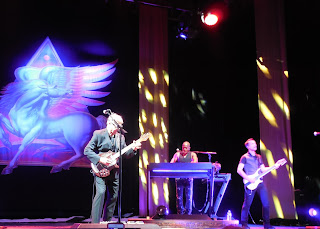 The playlist for Steve Miller’s concert was more or less in chronological order starting in 1968. As I said above, I had no history on the man so I had no idea that he had been around that long. The first few songs he sang, I was only slightly familiar with having heard them only when I started to dig up music to get ready for this concert.   Part of the way that I get ready for a concert is to listen to the artist’s music in the weeks prior; as a result I had been listening to a lot of Steve Miller Band recently.  It did not take long however, until he was playing songs that I was more familiar with. 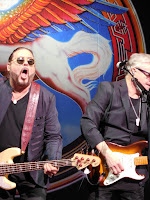 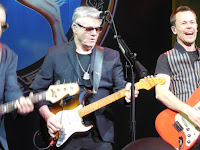 Steve Miller’s voice was strong and controlled. He was hitting every note that he meant to hit. Bob Seger rock the crowd,  I take heart that some Rock & Rollers never age.  Aside from the great music that I was hearing, I noticed something else. He was having fun. Not only that, his band was having fun too.  The crowd was enjoying the music and they were enjoying the crowd. It makes for a perfect evening. 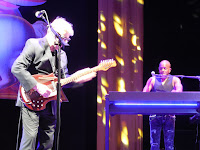 Likewise, his guitar playing was exacting. Every note was clear and exactly the note it was meant to be. I am always a little bit leery about going to see someone who has gotten a bit older – – often times it does not work out well.  But, ever since I saw 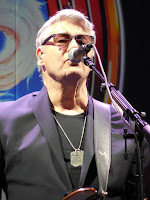 I won’t bother you with details on every song, but a few things happened during the concert that made it excellent. At one point he was performing the song Abracadabra, and rather than singing at the way I had always heard it, he turned the melody into something much more playful and intricate. It still paired well with music, but it was a different way than I’d ever heard it before. 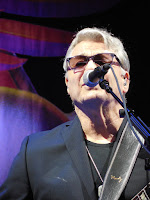 Miller also played at least one new song, not sure how new but he had to have the lyrics in front of him to perform it. Did not get the title of the song, but wish I had because the song was good. He also proved himself the Joker at one point when he started off singing something very slow and melodic – – and it took a few minutes for the crowd to realize that what he was singing was Jet Airliner.  As soon as the crowd was in on the joke, he went on to something else. 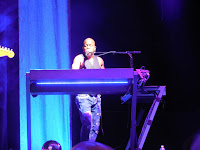 There were three songs that really stood out to me, not only because they were my favorites but musically they were performed in a manner that was the best that I ever heard.  The Joker:   A favorite of every SMB fan.  I can only imagine how many times he is played the song, but when he performed it for us -- it felt like it was still his favorite too.  The crowd did it as a huge sing-along.  Jet Airliner:  the song has special meaning to me, because every time I have left to deploy somewhere it runs through my mind on that initial take off. It’s about leaving to go one place, but still being connected to the place you are departing.  Joseph Wooten performed a wicked keyboard solo during the song. Again, I have no idea how many times Joseph has performed it over the years but it sounded absolutely fresh and with dynamite energy.  Fly like an Eagle:   Another great keyboard solo from Joseph and some dynamite music and vocals from the rest of the band as well. By the time the song came up, it was really showing that Steve was having a great night. He was smiling and the music he was giving us was terrific.

Throughout the concert, Steve Miller kept changing guitars. I’ve seen many musicians do this during a performance, usually trading the capabilities of one instrument for another to play specific songs.  There seemed to be a little more method to the madness and the way this was being done that night, as the guitars seem to match the chronology of the songs. It was almost as if you could match the guitar to the specific song it inspired him to write. The variety was amazing, from simple 6 string, to double neck 6/12 strings and a guitar/sitar. 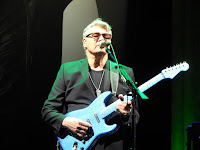 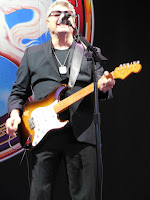 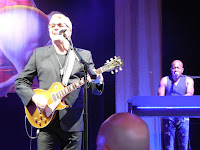 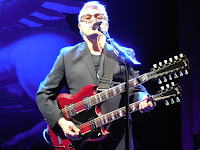 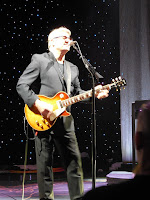 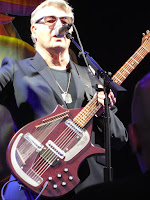 When I go to a concert, I expect to have a good time. After all, it is not easy to get good seats because of the myriad of privileged tickets that seem to get distributed before the event even goes on sale and if you do get good seats you pay a high premium for them. If I’m going to a concert is because I want to hear that person and I consider them worthy of my attendance and I walk in the door with high expectations. Those expectations get even higher when I am a fan of a particular artist, and in this case I was, so before the first note was played – – I was expecting something great.  I was not disappointed – – in fact my expectations were totally exceeded.

My only disappointment was that I didn’t catch one of the guitar picks Steve Miller flung into the crowd.  As a guitarist myself, it would’ve meant more to me than an autograph.  Maybe next time.

Note:  Joseph was nice enough to take a few minutes before the performance to come out and say hello. It was almost 40 years since we saw each other last, but what are a few decades in the bigger scheme of things.

The basic design of the theatre gets a B at best.  I am probably more sensitive to stairs due to having a family member with accessibility challenges, but even without that, multiple staircases up and down to get to a bathroom or anything else was the result of poor layout planning.

Worst of all was the crowd control.  I was in the fourth row center, but due to a rude person and his friends in the front row -- who insisted on standing and leaning against the front of center stage throughout the entire show -- I would have had just as good a vantage point for several hundred dollars less by sitting further back.  Yes, he paid for a front row seat, but I paid a premium for my seat too and it was not to stare at his back during the performance.  He should have been told by security to sit down or move to the side (this is what happened when I went to Bob Seger a few years before).  Better yet, require him to change seats with the people whose view he was blocking.  We were all there to enjoy the concert, not just him and his buds.  Concert etiquette, dude.

I am not sure who to give a shout out to for the sound, might be the band – – might be the venue. It was loud, but not overly so. I’ve been to a few concerts where the band totally goes overboard with the volume because it’s Rock & Roll.   This concert did not do that, instead the volume was loud as it should be for Rock & Roll, but not so loud that you needed earplugs or left with a headache. Let’s hear it for the sound dude!