Gentlemen, Start Your Engines -- Then Duck!

In case you haven't been paying attention, or even if you have, you will notice that this is the third missive I have written. If you check out the calendar will find out that I've also just completed my third week here. So, this means you will receive 49 more of these e-mails filled with my comments on life in Kuwait. This week I'll be talking about getting around and driving. 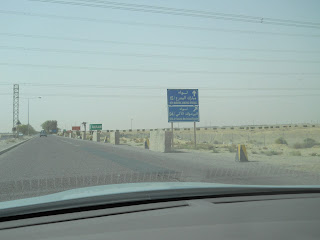 I have driven in downtown Paris around the Arc de Triumphe, in downtown LA at rush hour, I have driven in Washington DC in the middle of the National Christmas tree lighting ceremony, cruised the Auto Strada in Italy, looped the Nuremberg Ring in Germany and challenged the Tail of the Dragon on my Valkyrie. None of that prepared me for what I was about to experience by driving in Kuwait. At first, it does look like mass chaos but after observing poor little bit I realized what was going on was a lot of macho one-upsmanship on the road.
A few things I have noticed:  Turn signals are not only optional, they often mean the opposite and therefore usually ignored by others.  The speed limit is enforced not by cops but by randomly placed speed bumps when you least expect them.  The meanest, fiercest, most aggressive creature on the road here is a woman wearing a burqua.  They can be vicious and you just know that under that veil they are sticking their tongue out at you. 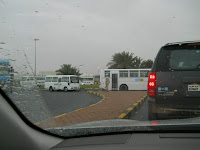 It is not unusual to be cruising down a two-lane road and have someone behind you honk for you to move over to the right so they can add a lane to the two-lane road. You can be cruising down the highway at 20 km above the speed limit and look in your rearview mirror to see lights flashing for you to move over so someone in a Ferrari can pass you.  I have also been sitting in the center lane and had the car behind me pull into the left lane just to pass me so they could be one car length ahead. As long as things are moving, they actually seem to work. However, when there is a traffic jam or a traffic circle to deal with that is when things get really wild. 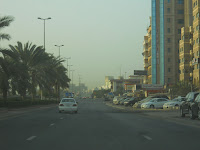 For some reason Kuwait has chosen to make whoever is in the innermost of the traffic circle the possessor of it right away. This means you can be cruising around the outer part of a traffic circle and suddenly have to brake because the person who is at the center of the traffic circle has decided that it's time for him to exit. So without looking or signaling, they will suddenly make a right-hand turn in front of you.  The traffic circles themselves are unmarked so they tend to develop the number of lanes that are needed at any given time. There is one in front of the refinery which normally has two lanes but I've seen it go to as many as five depending on how much traffic is trying to get through there.
Once while stuck at an extremely long light, the car behind me wanted to get a jump on the green and actually pulled up on the sidewalk in order to get around me as soon as the light changed. I let him do it without an argument -- -- I wasn't going to play that way.  Also, during prayer times the right lane will sometimes turn into a parking lot as people exit their vehicles to dash over to the mosque. I have no problem with that. The problem starts when all of them get out of the mosque after prayers and try to take off at the same time from this ad hoc parking lot while the road is thick with people trying to cross to get back to their vehicles. I have now figured out ways to get around the mosques at that time of day. 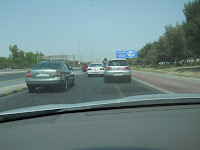 Roads are kind of invented when you need them. I was once given directions that included the statement “takes the dirt road through the dirt lot”. When I got there, there was a huge vacant lot that indeed had a car trail going through it from one side to the other. I did a little of this myself when I was trying to get out of my current apartment to the coastal road. There is an apartment building under construction across the street and I noticed that there was a small service road that went beside the building that was about a car's width.  So I took it. Since that time everyone in the neighborhood started using it and now we have created a new informal road at least until they finish construction and that road becomes the entryway to the building.
Being someone who likes to listen to the radio when I drive, I’ve found you have one choice if you want to hear English spoken; the Super Station which I assume is run by a British expatriate. The radio station plays a vast combination of music to try and satisfy its audience. I've heard country, hip-hop, a rap cover performed by someone with a thick Arabic accent in English, European techno, electronica which included vocals by someone who sounded like Pavarotti, salsa, and Henry Mancini. That is all I can attest to because that is what they played on my Thursday morning drive from Mangaf to Arifjan.  It is not only variety but variety right now. 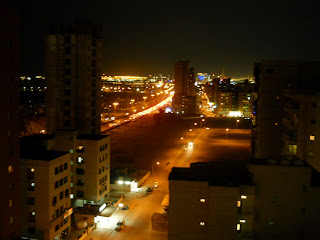 Nighttime is one of the scariest times to drive here. I mentioned ego as part of the reason why driving here is dangerous, at night it becomes more of a game of daring as a lot of people cruise around with no lights on at all.  It will shake you up to be cruising along the highway and then suddenly look in your rear mirror and realize there is a car 10 feet behind you traveling at 120 kmh or so with no lights on at all. I try to stay out of dimly lit areas at night to avoid this happening to me.
A majority of the population moves around on buses; so you have to contend with these moving in and out of traffic as well. I will probably never travel by public transportation here but they look very well kept and modern. Also, due to the income levels being at the high end of the spectrum I have seen cars here that I've only seen in magazines.  The Lamborghini Contach and Diablo, several Ferrari models I have never seen before, Porsche Carrera's, and some of the finest in German automotive technology. It is so wild to pull up on one of these and see the guy driving it wearing a headdress. 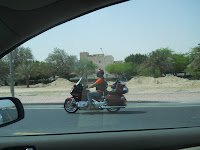 Fear not for me since I invoke my full satori when I drive.  I see this all as being very similar to riding a bike when you watch out for the road, yourself, and everyone else around you.
Because of the dust you will see people start their car and then climb out of it and turn on their air-conditioner while standing outside the car. This is to blow the dust out of the vents before they get in. Each apartment building has something called a Haris (at first I thought this was the person's name but it is a general term used for a handyman) who in addition to fixing things for you will wash your car and a daily basis for about a buck a day. Because there is no rain, Ollie is really doing is rinsing the dust off the car with a hose.
I will relate one story not from this trip but from one of my trips into Kuwait previously. I was cruising down a strip of road known as the Dead Sheep Highway. I have no idea how the road got his name, when I came upon a pickup truck that was loaded with people in the back. There were several kids, Mom and what seemed to be grandma all sitting in the back of a pickup hunkered down to keep out of the wind. As I passed the vehicle, because he was going slow, I glanced over at the driver and saw Abdul driving intently holding onto the steering wheel tightly with both hands staring out the windshield then I noticed that sitting next to him in the cab of the truck was a goat. I guess the goat was too valuable to put in the back of the truck. 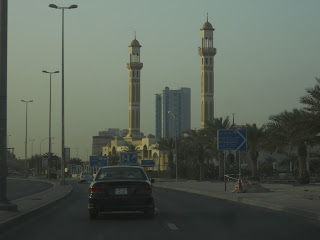 Right now, on Sundays I go out and do a bit of exploring to get familiar with my surroundings. I have found a place to shop for groceries, a place to get odds and ends, and several decent restaurants in my neighborhood. It's kind of difficult to do this with only one day off a week but I am managing to discover new things every time I go out. Also, since summer is coming on his sexy staying lighter later and after work sometimes I will do some quick look around when I see something interesting.
Posted by Charles Schell at 07:11 No comments:

Whether You Like It Or Not There Will Be Weather 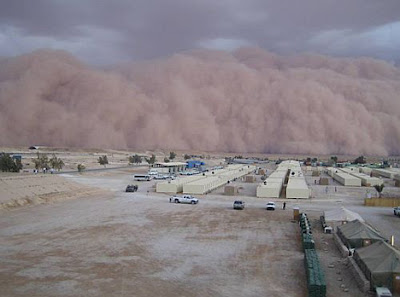 I get asked a lot about the weather here. Right now it is not hot, but it is coming soon. Most of the days are between 70° and 80° and it goes down to around 60 at night. Soon, the additional top-end around 130° and the nights will be around 100.   For the past several days we’ve been dealing with dust storms.

Until they get here most people think that Kuwait is a big sandbox.  It really isn’t. It may be sand colored but what covers the ground is actually a very fine dirt.  Because of the arid climate there is no moisture in the air so the dirt has the consistency of talcum power.  When you walk across it it makes little clouds every time you put your foot down. So when the wind starts to pick up and race along the surface of the ground  it throws all that dust into the air. The result is something that looks kind of like brown fog. Usually people put on breathing masks if they have to go out in it. And it makes driving and other outside activity more dangerous because of the lack of visibility. 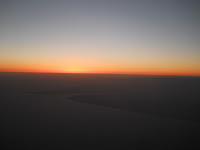 Yesterday, they had to shut down entrance and exit to the base for a few hours because we were in the middle of a dust storm.  Of course, because the land is fairly flat you can see these things coming for miles before they get to you which makes them kind of predictable.    The wind gusts today have been up to 50 km  so there is a lot of dust in the air right now. 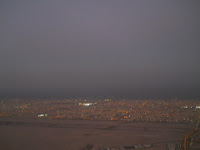 Today was my day off, we work 11 hours a day six days a week, and I was going to go out to the base to do some shopping and explore the facilities there for recreation, etc. But the dust was so bad that I could not see clearly 30 feet in front of me. So instead, I did some shopping around town and watched some TV.

I guess, given the choice between dust and heat I will take the dust at least for a while.
Hope the weather is better where you are…
Posted by Charles Schell at 12:22 No comments: