In The Wind...Any Way You Can

My Dad sent me this one.  Great sense of humor and a great outcome.


Posted by Charles Schell at 14:20 No comments:

The riding year is quickly coming to a close, I think there may only be about 10 good days left before everything freezes up. As the season ends, I've started to reflect on some of the high points I have enjoyed this year. My season will end up being a total of seven months, seven weeks of which I lost due to being out of town or other uncontrollable circumstances. I'm not counting days that I lost due to bad weather because that is just part of a season. Anyway, this takes me down to about a five month riding season.
Overall, I would rate the season as very good. I wish I had more time to take longer rides but I enjoyed all the rides I was able to take. During my five months I rode five different types of motorcycles with varying weight and power specifications. In each case I was able to adapt and learn how to control a new bike in a short amount of time.
The Most & Least Favorites of the year…


Favorite climate for riding: Fog. To me it is the most enjoyable type of weather to ride in especially first thing in the morning. Gliding through it feels like flying through the clouds without an airplane. It is awesome. Someone once told me that dogs like to hang their head out the window in a car because it makes them feel like they're flying, riding in fog must be what it is like. And yes, I know it is the most dangerous weather phenomenon to ride in, it hides deer, obsticles and stopped 18 wheel trucks.
Favorite road segment: The northernmost section of Skyline Drive, the parts where I shot the video.

I hit it at the perfect part of the day, I had the most energy and the most confidence in myself and the bike. It
was definitely exciting with S turns, switchbacks, and nice wide curves. The speeds may have been low by regulation, but the road difficulty made it worthwhile.
Favorite night ride segment: The furthest north section of the circumnavigation of Lake Michigan. My son and I hit it late at night, the sky was clear and the only drawback was the cold. It was a fantastic way to bring in my 51st birthday.

Favorite highway on-ramp: In Grand Rapids, when you go from Highway 131 to the road that takes you to Benton Harbor there is an on-ramp that has to be the biggest curve I have ever seen on a highway. Not only is this thing long, it is well banked and you can take it at significant speed to make it a lot of fun. I almost turned around and went back to do it again.

Favorite group of fellow riders: The group of investment bankers I met at the southern part of Skyline Drive. These guys fit in totally having dropped their normal persona for the freedom of the road and except their Blackberries would never know what they did for a living.

Most memorable person met: Crystal at the Texas Steakhouse near Milwaukee. I don't often get flirted with like that, it was very flattering.

Favorite good omen: After I had been riding for a week or so I started to notice more and more things around me. One of the things that I started to notice most of all was that on almost every ride I took, I was accompanied by hawks in the sky above me. From that point on I almost always saw them flying with me. That is a good omen. Thinking about making a hawk my next tattoo.

Favorite morning view: A few weeks back I was lucky enough to catch the moon setting as the sun was rising. The sky all around the moon was lit up and almost glowing. It was so awesome that I pulled my bike off to the side of the road and sat and watched for a while. I really wish I'd had a camera with me that day. 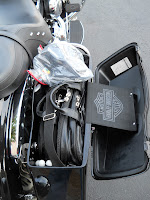 Favorite saddlebags: Between the bags on my Silverwing, the bags on the Road King, and the ones on the GoldWing.... I like the ones on the GoldWing best for opening and closing, but the Harley bags were the best for actual loading because they loaded from the top. The bags on the Silverwing are good but they load from the side which can make them almost impossible to arrange stuff inside and slam shut without losing a finger.
Favorite aftermarket item: Non Tech: Kuryakin highway pegs. They made riding so much more comfortable on the Silverwing. Tech: Scala Q2 Bluetooth headsets. Simply awesome for riders who want to communicate with each other. 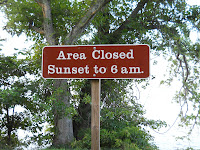 Least favorite thing seen while riding: The "Closed at Sunset" sign that was posted on my favorite make out spot on the Colonial Parkway. Seriously depressing.
Favorite place to take a break: McDonald's. Quick, inexpensive food and a nice place to sit and relax for a minute. Also the bathrooms are clean and they have free Wi-Fi

Favorite sexy biker chicks seen: All of them. Are you kidding? Have you seen these ladies?

Favorite chili: The restaurant at the Harley-Davidson Museum in Milwaukee. Seriously spicy.

Favorite thing about organized rides: The people. I have met some of the friendliest and warmest folks while on organized charity rides. They're all about enjoying the ride and sharing the joy they find in riding.


Favorite guilty pleasure while riding: I like to “move” with the music I am listening to. It gets worse if I am stopped at a stoplight – although it has never gotten so bad that I have dropped the kickstand, gotten off the bike, and broke into outright dancing. There is a legitimate reason for it; I found it helps me from getting stiff on long rides. 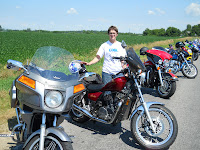 Favorite wingman to ride with: My son. The longer we ride together the more skilled we both get at cruising through traffic and working with each other to make the ride smoother and safer.

In honor of my fellow Veterans:

Posted by Charles Schell at 06:00 No comments: