An Offer He Couldn't Refuse, the Lady Is Mine

I had done well, staying true to my plan up to this point. Now it was going to be the first real test: getting the right bike for the right price. I knew the blue book value of the bike was $1275. I also knew that the bike did not have a radio and was not pristine -- -- even though it was in beautiful shape. I decided I would try to get him to come down from $1500 to $1000. I knew this was a big difference and decided that if I had to I would walk out at $1100.

I was right on time getting to Seller's Mother's house but just as I got there I got a call from him letting me know he was going to be about 30 minutes late. So my son and I cruised around the area for a while to kill time. Finally, it was time to go and strike a deal. I had my son wait in the car, that would make it easier to walk away if I needed to. I met Seller for the first time and he seemed like a nice enough fellow. We walked up to the garage and he started taking things out of the back of his car that he had for the bike like a manual, the seat back for the drivers seat, and other spare parts and extra filters. The time came to deal.

First, I offered them $900 to which he said for that he would just keep riding it himself. There was an awkward silence and then I told him make me a counter offer. He said $1300, so I replied that the most it was worth under blue book was $1100 and since it didn't have a radio I would offer him only $1000. He said fine, $1200. Then I fanned out 10 $100 bills in my right hand, then held out a $50 bill with my left hand and said "$1150 -- final offer". He said "Done". I then handed him the money and had my son pulled the car round to the garage so we could load up all the extra parts and I could get out my gear.

After he signed over the title, I had him address an envelope I had brought so that I could mail the plate back to him once I got in home. Then, I jumped on the SilverWing, I put on my safety gear, and then after saying "Let's Ride" under my breath I took off for the first time on my new bike.

My son drove the car in front of me acting as a guide since he had the GPS and I did not. I quickly became very comfortable handling the bike and found cruising at highway speed almost relaxing. Before we got onto the interstate I got a good feel for rapid deceleration and handling at highway speed while on a smaller four-lane state road.

It is very hard to put into words what it felt like, but it brought back a memory. When I was a kid of about 10 or 11 I was going on a camping trip at the Boy Scouts. It was the first time I'd ever ridden in the back of an open pickup truck. After we got off the main road and turned onto a smaller road that led to the campground the three of us in the back stood up and faced forward looking over the top of the cab of the truck. (This was dangerous as hell and I would not recommend anyone do it. If we had hit a bad bump all three of us would've gone flying.) As we cruised down that road at about 30 miles an hour, the feeling of being wide open with the wind whipping around my head and through my hair was fantastic. It made me remember a scene from the Rat Patrol TV show where there would be a guy standing in the back of a jeep as they went speeding the desert looking for Nazis. I kept the memory of that experience with me for a lot of years. Riding my bike up 69 North brought it all back.

It was not really warm, only about 40° but there were a few other bikes on the road and each waved at me as they went by. It was awesome.

170 miles later I parked my new motorcycle (new to me) in my garage and climbed off.

Trying It On For Size, Feel and Fit

On the 17th I was supposed to go for a test ride on the bike and also close the deal. However, the Seller called me a few days prior to let me know that a good friend of his had died and he needed to go to a funeral on that date. He wanted to set up a meeting on Sunday the 18th to do the test drive and strike a deal, but this would not work for me because I had arranged for a mechanic to give the boke a once over and the mechanic did not work on Sundays. So, I suggested that he let his mother show me the bike on the 17th and we give me on the 18th to close the deal. He agreed.

I was a little late getting there on the 17th, it'd been a long time since I had been to that area of Indiana and had forgotten how far away it was from Fort Wayne. When I got there I met Seller's Mother who was very cordial and took me out to see the bike which was in her garage. The bike sat there covered in a light layer of sawdust but looking very much like the pictures the Seller had sent me. I dusted off the seat, and put the cover back over the battery. It did not start on the first try, the battery was a little weak so I removed the cover and put it on the charger. A minute or two later she started right up. After replacing the battery cover again, I sat down on the bike for the first time. The fit was perfect.

I donned the rest of my safety gear and backed out of the garage then took off down the alley. The friction zone was perfect, and even though I'd never been on the bike before I never stalled it out. I had to drive several miles to get out of town but the traffic was light so it was not too nerve-racking. When I finally did get on the highway, I rolled her up to about 60 miles an hour and cruised there for a little while to see how she sounded. It was awesome. After driving to the next little town, I turned around and headed back towards the bike dealership that was going to give the SilverWing a once over.

The mechanic made quick work of the inspection and I was back on the road with a verdict of "Damn fine shape for its age". From there, I just cruised. I did a bit on the highway, I did a bit on country roads, I did a bit to the city. At one point a GoldWing came up from behind me, waved and then rode along side of me for several miles down the highway.  I would loved to have gotten a picture of it.

60 miles later I returned the bike. She was going to be my first bike, if I could make the deal I needed to.

My First Bike? Probably So!

In all likelihood this will be my first bike.  1982 Silver Wing Interstate GL500.  Just over 40K miles and looks to be in prime condition.  I test ride,  take to to a mechanic and drive it home on the 17th. 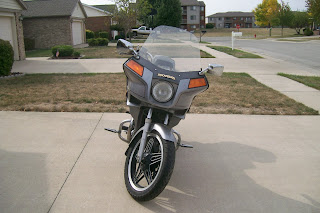 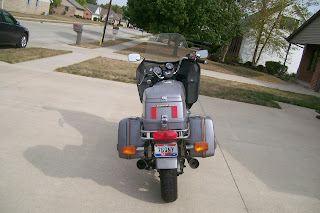 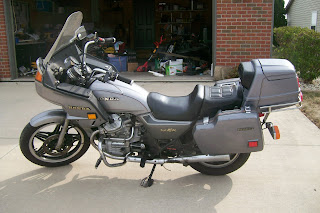 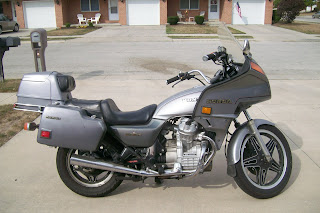