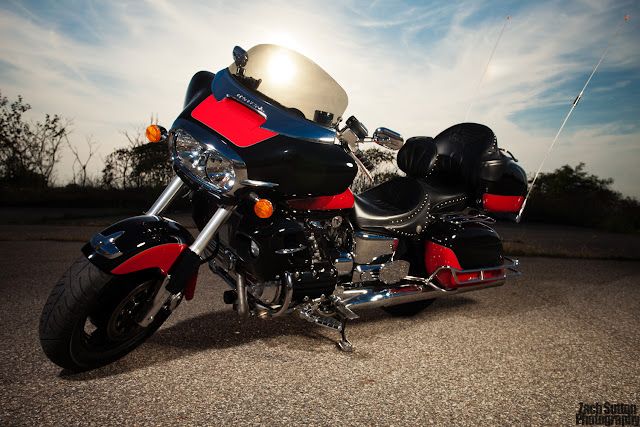 It has been a little while since I've made an entry, it is not for lack of material as much as lack of time.  When I write, I have to feel a certain amount of inspiration infused with emotion.  As with anything, this type of energy is limited and if you use it on one thing, you don't have it for another.  Therefore, I will admit it:  I have been cheating on my blog with a novel.    I won't delve into details here except to say that I hope to have it released in early 2012.  Anyway, time for the annual awards ceremony, so I will put on my tux jacket with my chaps and start opening the envelopes.
Overall, I would rate the season as excellent.  I started the season riding my Silverwing and completed it on my dream bike, a Valkyrie Interstate.  Later in the year my bike was selected as the featured bike for July in the VRCC calendar.


As always I wish, I had ridden more than I did, but I think that is always the way things are.  This season I rode approximately 7000 miles.   I guess I should mention here, I never stopped riding from last year.  In each of the past 18 months, I have ridden at least one day out of every month.  This year I actually rode on Christmas Eve and Day -- which is not the norm for Michigan.
Anyway, the year as I saw it:
Favourite Road Segment  While down in Tennessee, my son, Tikk and I took off from the group and rode something called the Devil'sTriangle.  Even though the star of the area is the Tail of the Dragon, the Devil's Triangle was actually a more enjoyable ride because there were segments that are not so technically intense and you could actually spend time looking around at the beautiful scenery.  If you are in the area to ride the Tail, take time to ride the Triangle.
Favourite Night Ride  After riding the Tunnel of Trees with a group of friends, I was still many miles from home and I was on my own to ride it.  The ride was easy and had long stretches and sweeper curves.  What made the night my favorite was riding into the sunset and going from twilight to darkness.  The road was surrounded by trees and lacked any city lights or other earmarks of civilization.  It was almost like riding through a deserted planet.  It was kind of spooky and fun at the same time.
Favourite Group of Riders  The folks who did the Tail of the Dragon with my son and me.  If you didn't read it then, take time to read it now.  This was a group of seriously good people.
Most Memorable Person Met:  A tie between the older lady I met in Marysville, OH who seemed to know a lot about motorcycles and Valkyries in particular and the young woman who shared her music with me on the subway in Washington DC.  Honorable Mention: the Canadian Border Agent.
Favourite Place for Breakfast  Waffle House.  Always and forever.
Favourite Non-Human Mammal  MacBeth, of course.
Favourite Music Video  My son always does some great music videos after our rides.  This one is my favorite from this year.
Rudest Motorists  New Yorkers.  Maybe it was just the area surrounding Buffalo but I have never felt so threatened by cars as I was there and keep in mind I have ridden in Washington DC traffic. 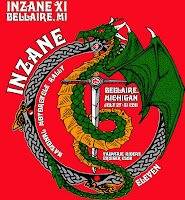 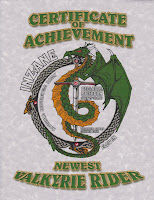 Favorite Organized Rally  Inzane XI.  I had never seen so many Valkyries in one place or so many friendly people.  Since I'd only owned my Valk a couple months when I went, it was a very special treat to be around so many like-minded riders.  Being a newbie got me an award.
Favourite Concert  SEGER!
Favourite Music Discovery  Amy Winehouse.  What a waste she is gone.

Favourite Ride for Riding Sake My trip around Lake Erie.  Since I was alone and on limited time, it was more about spinning miles than it was looking around.  The Valkyrie performed magnificently and even though I rode over 800 miles, I got off the bike at the end without being sore.
Favourite Guilty Pleasure While Riding  Last year, I said that simply moving to music at stoplights was my guilty pleasure.  This year, I went one step further when I actually dropped the kickstand and got off the bike to do a little dance.  Admittedly, I was trying to warm up more than anything, but I enjoyed it and I think my dance partner did too -- whoever she was. 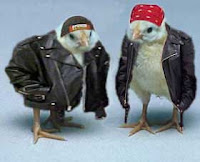 Favourite Place To Take A Break  Still McDonald's.  Good snacks, clean restrooms, and free Wi-Fi.  All good things, but I wonder why they only bring back McRib after riding season.  What's up with that?
Favorite Sexy Biker Chicks  All of them. Are you kidding? Have you seen these women? 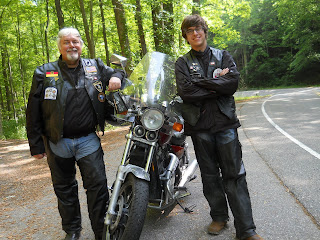 Favourite Wingman:  I would recommend riding to any father who is looking for an activity to enjoy with an adult son or daughter.  It is great time spent together and provides many once-in-a-lifetime experiences to share.
So much for 2011, it is almost time to start making 2012 memories.
5419
Posted by Charles Schell at 13:45 No comments: