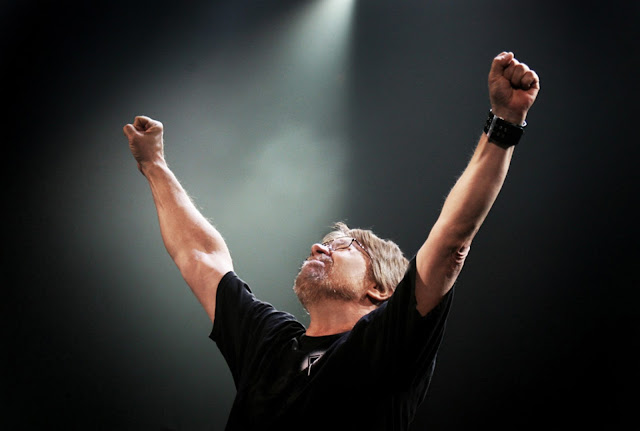 On 28 May I went to see Bob Seger and The Silver Bullet Band at Van Andel Arena in Grand Rapids with my son.  This was the last performance of his 2011 tour, and it was a miracle that I was able to get tickets at all.  The seats were 10 rows from the stage which gave us a great vantage point to watch the concert.

The lights were up after the warm up band;  Bob Seger & The Silver Bullet Band would be on in a few moments.  I looked around at the crowd.  A majority were 50 or older, the men were mostly gray, the women dyed.  The lights went down as the band and Seger came out,  they too were gray haired and older.  For a moment I was wondering what this was going to be like,  then he launched into Roll Me, Away.

The voice and music were the same that I remembered from the 70s.  Years had Not diminished voice or the ferocity of the music.   The crowd rose in unison, and within 30 seconds we were transported decades back in time;  dancing and singing along.

For the next hour,  I was totally enthralled by the music and the emotion that was pouring out of the crowd.  Every song he played was familiar to me and every song had a vivid memory attached to it.  Through my mind I scrolled through old girlfriends, times spent having fun with friends, late-night rides, and moon lit nights on beaches.  All of it was so long ago but the music brought them back to life as the images danced through my mind while my ears were treated to the music.

The audience formed a single unit and our fists rose to the sky in victory at the end of every song, mimicking what Bob Seger was doing himself.  The cheers and applause lasted almost as long as the songs themselves.  I would look around, when the lights were bright enough, and I studied the expressions on every face.  All of us were sharing a moment.  The smiles, the looks of longing in the eyes, and at times tears were all being displayed in the open as each of us knew we were sharing emotions that each one of us was feeling.  Seger was encouraging us to sing along and appeared to be having a grand time as well.

There was a short break of about 10 minutes when we all collectively caught our breath.  I had heard rumor that Seger himself was catching his breath with an oxygen tank due to years of smoking.  None of that seemed to matter to us or him, when he was on stage his face showed that he was fully alive and enjoying every minute that he shared with us.

When he came out for the next hour, it was as if the entire band had been magically recharged.  The first hour and the second matched in both intensity and vibrance.  We rocked out.  I noticed a woman who was standing a few rows in front of me.  Her hips were gyrating in time with the music in her arms were reaching up towards the sky.  She was totally in her own world and from what I could see it was a good place to be.

I saw couples dancing with bodies pressed together during the slow songs.  Perhaps they were reliving a bit of romance from the past or maybe the music was creating their first romance that night.  I had no way of knowing.  It really didn't matter, the effect either way was the same.  You knew they were enjoying the music and that it had meaning.

It had been a long time since I've been to a real rock concert.  I can't remember one ever being like this where the audience and the artist connected so fully and where both seem to be having such a good time together.  More often than not in the past the artist would seem almost aloof or disconnected from the crowd.  Seger and his band were not, they were reaching out to become one with us and to let us know how much they were enjoying performing.

Bob Seger sang the road songs, love songs, and the songs of trials and tribulations.  His voice never failed nor did it ever waiver.  He was performing a concert today with the same energy he had performed concerts for the last 30 years.

When the second hour was over and the band left the stage, the crowd clamored, and screamed and yelled in till they came back out.  The band returned and  performed three more songs, then exited the stage as it went dark.  Again, the crowd went wild.  Bob Seger brought his band back out for another encore.  It was at this point that he played one of my favorite songs: Night Moves.

The song itself had particular meaning for me as it came along during a period of angst when I was in high school.  Even though my experiences at that point were limited to heavy petting, I could identify with the lines “I used her and she used me but neither one cared.  We were getting our share”.  To me that personified dating in high school where we were all just learning about basic sexuality, love, and affection.  It was a time of practice and experimentation.  That song captured it so well.

After three hours of listening to Bob Seger and The Silver Bullet Band’s music and allowing them to take us on this musical journey it was suddenly over.  The second encore ended with Rock & Roll Never Forgets, it doesn’t.  It was the best damn concert I have ever seen.  Seger rocks and I won’t forget that either.

Here is the music video,  details on the trip to follow.﻿

Another Day, Another Quest, and More Cowbell

In days of yore, people of like lineage would depart their homes on journeys of purpose traveling together in a vehicle called a “station wagon”. While inside these vehicles there were numerous calls and chants for unity such as “Are we there yet?”, “Dad, my sibling is on my side of the car!!” and “I have to go to the bathroom!”. Such chants were punctuated by the lyric telling of tales regarding bottles of beer that somehow defied gravity by staying on the “wall” without visible means of support, until they were taken down and passed around. Another well-known tale was that of a canine whose name starts out identical to a number and letter based game of chance but then slowly degrades into a series of percussive slaps of the hand. Nevertheless, I digress-O.


Three years ago there was a journey undertaken by a man, one of his progeny, and a hound of incredible intelligence. The goal was to visit the father’s father who had recently acquired a medical marvel known as a “new shoulder”. The routing took them from the wilds of Michigan, to the Rock n Roll Hall of Fame, through West and Regular Virginia (where they visited another of the sons and his recently acquired love interest) then on the destination. Be assured the route home was no less wandering.
At some point during the journey, the trip itself became known as the “The Quest for More Cowbell” even though the trail was littered with stickers saying “AYBABTU”.
The following year the trip took on a new dimension as only the father and son were traveling and even though four wheels were again involved, this time there were two vehicles with two wheels each. The goal was circumnavigation of Lake Michigan and stops included the Harley-Davidson Hall of Fame and a place of mystery and wonderment known as Sheboygan with a secondary visit to Cheboygan. This was known to both a disinterested public and an ignoring press as “The Quest for More Cowbell II”.


On May 18. 2011, two strong, fearless, unconquerable and incredibly handsome travelers will again depart home and head out seeking fame, fortune, adventure… and of course more Cowbell. The journey will include stops in Columbus, Ohio and Wabash, Indiana. The goal that will be reached between these two bookends is the Smoky Mountains of Tennessee and a legendary Dragon begging to be slain. This adventure will forever more is known in lore, song and in my blog as: “The Quest for More Cowbell III”.
Face it,  life is better with more cowbell.

When I approached her place, I saw her standing off to the side near the garage.  I parked and then got out and walked over to her.  Two thoughts ran through my mind, the first was that her picture in no way did her justice; she was gorgeous.  The other was that for some reason she sounded taller on line, it is odd how the mind fills in the blanks.As I got closer, I let my eyes wander over her and realized that she was only wearing a bra -- it made me smile.  When I reached her I purposely walked right past her, not wanting to let her know how much I really wanted to stand and stare.  Walking to her ass, I placed my hand on it and then let my hand glide up her body as I walked around her slowly.  She stood totally still and did not say a word or move a muscle.  I knew I was making her mine.

After circumnavigating her, I stopped on her right side then I reached out and caressed her in a way that I knew would cause her to react.  It did.  She shuddered and then moaned with a deep throaty sound.  The shudder then calmed and turned into a deep throbbing vibration -- I could not resist her charms any more.  In a heated moment, I mounted her hard.

She moaned louder as I stroked her and felt her vibrations throughout my body.  I threw my head back and smiled letting the waves of her free spirit wash over me unbridled.  I was in ecstasy as I first gave into her wiles and then grabbed her with both hands.  I took control of her -- not to tame her -- but to make her mine. She released herself to me, letting me have her full passion. Then I heard a sound behind me -- but we were so taken with each other we did not care who saw us or what they thought.

"So, I am guessing you want to buy the bike, come on inside when you um finish whatever it is you are doing there -- but I am not judging you, man." 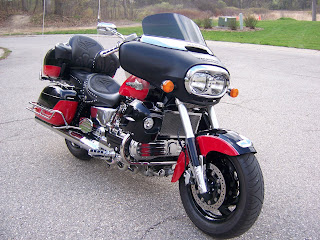 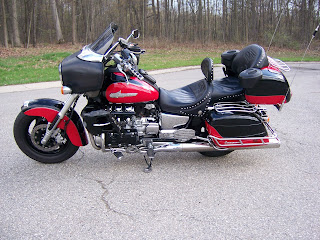 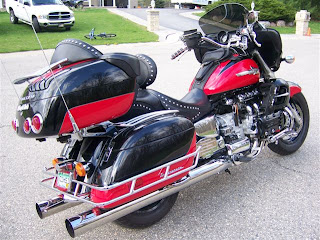