Got Cat Class & Got Class Style With a Christmas Twist 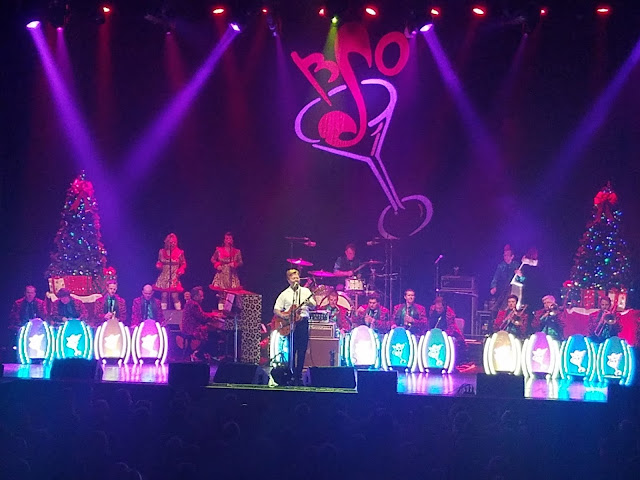 In the spring of 1982 I happened to be watching a show called Friday's on the Armed Forces Network while I was in Berlin. The show was sort of a Saturday Night Live clone, on a different network, and like SNL featured sketch comedy and a musical guest. I was about to flip the TV off and had out when a trio appeared on camera dressed like something out of the 1950s rockabilly era and started playing the Stray Cat Strut.  That was my introduction to The Stray Cats and I was immediately hooked. I watched the rest of the show and they played several other songs -- to include Rock This Town.  During the closing credits there was a notice that the band was not even signed to a contract in the United States.  Fortunately, they did have a recording contract in the UK which meant I was able to find some of the recordings in the local German music stores.

In the late 90s, I was attending COMDEX in Las Vegas when I heard that Brian Setzer was performing a corporate charity gig at The House of Blues. I did everything I could to talk my way into tickets for the show, but had little success. Someone had heard a rumor that they were going to sell a few more tickets that have been held back at the door, I considered it worth taking a chance and made the trip over to the Mandalay Bay casino to see if I could get lucky. I arrived at the ticket window of The House of Blues just in time to see them hang the "Sold-Out" sign. I stood there for a minute to let it sink in and as I was turning to leave someone who was in line waiting to get into the venue, asked if I might be interested in a ticket.  He explained that their group was waiting on one more person to show up, and if that person was a no-show that would be more than glad to give me the ticket because it was obvious I was a fan. I stood in line with the group of folks, who were also COMDEX attendees and when their friend failed to show I gladly took the ticket off their hands and got to see my first rockabilly performance by Brian Setzer live.  I did send a round of drinks over to my benefactors as my way of saying thank you.

Fast-forward some two and a half decades later and I am once more given a chance to see Brian Setzer live. This time it was the 13th Annual Brian Setzer Orchestra Christmas Show. I was able to secure really good seats and it was in one of my favorite venues the Kalamazoo State Theatre.

They kicked off the night with a cover of Brenda Lee’s Rockin' Around the Christmas Tree and then went straight into Hoodoo Voodoo Doll.  This was not your usual Christmas concert and I was glad of it because there were just too many other songs I wanted to hear and see played.  Brian did not disappoint as the next song up was Stray Cat Strut which featured an awesome guitar solo by him that really brought the level of the evening right up. 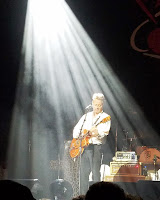 The rest of the evening followed the same pattern with songs like Gene & Eddie being sandwiched Boogie Woogie Santa Claus and Here Comes Santa Claus (Right Down Santa Claus Lane).    Some serious rockabilly was set loose with (She's) Sexy + 17, Jump, Jive an' Wail and a BSO version of AC/DC’s Let There Be Rock.
between

Towards the end, Brian sent the rest of the orchestra off stage and then did a very intimate acoustic solo performance of The Christmas Song (aka Chestnuts Roasting On an Open Fire).  It was perfect for getting you into the Christmas Spirit and bringing back memories of holidays past. 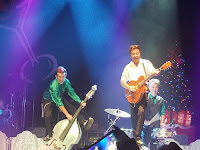 The concert also featured a spotlight performance of Brian performing with just two other musicians (a’ la Stray Cats).  With Johnny “Spazz” Hatton slapping a standup bass and Daniel Glass playing a stand up drum set they truly channeled the spirit of rockabilly bands past into that theater.  They tore up a Little Junior's Blue Flames cover of Mystery Train, and also played Put Your Cat Clothes On plus the Setzer original Fishnet Stockings.  Once again I was witness to a bass player who was anything but boring. Hatton was fun to watch and his playing was so top notch that it went from 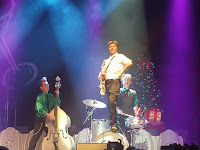 fun and into deep appreciation. Glass not only managed to play the drums “old school, drummer standing style” but he kept the driving rhythms solidly steady.   Setzer’s playing was so slick and polished, the man does not miss a
note.

A feature performance of the Nutcracker Suite (I love updated rocked up classics) was another stand out number that led to a two encore finish.

I talk a lot about the attitude of musicians when I see them perform live.  Their attitude effects the entire feel and experience of the performance.  The one word that describes Brian Setzer’s attitude for this entire performance was relaxed – and I mean that in the most positive way possible.  From the minute he walked on stage until he took his last bow the entire experience felt comfortable and personal.  He appreciated the audience’s responsiveness to his performance and he was indeed the master of the stage from start to finish.  It was a perfect performance for the mix of music presented. 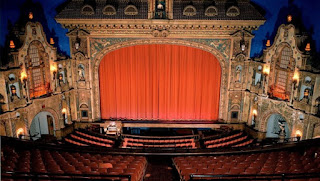 The Kalamazoo State Theatre was built in 1928 and was constructed at a time before electronic amplification when the concentration moved from quality to quantity.  As a result, acoustics mattered since you had to be able to hear every voice on stage from any seat in the house.  It is, therefore, a spectacular place to see a concert.  A performer does not have to over amp (“Turn it up to 11, Dave!”) to fill the house with sound and as a result the front seats can be enjoyed without hearing protection as well as the cheaper seats in the back of the house. 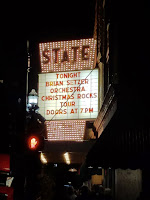 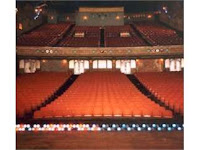 I have seen several shows there, and have tickets for 2 more in the coming months.  Given the choice I would gladly see a show here over any other venue in Michigan.  It is a unique gem that truly must be seen and experienced to be appreciated.

NOTE:  If I ever get entry into the theatre with my Nikon, I would love to do a photo essay of the building for the blog.

Posted by Charles Schell at 19:36 No comments: