Sir Issac Newton Only Had the Plague to Worry About

Sir Isaac Newton and a great many others did their best work while quarantined – – let's just say it didn't do a thing for me. Writing is a solitary thing. You dream up a story and then set down to put it all on paper -- at least that's my process. You would think, given the way the quarantine is supposed to work COVID19 would be the perfect environment for a writer and it might be for some. COVID19 was a huge disrupter to life as we know it and it also disrupted and delayed the completion of my last book Ferdinand's Gold. The book was finally released at the beginning of this month, but not without a lot of stops and starts over the last six months.

It is very satisfying to have this story completed. I was part of the events that occur in the book on Guam in 1986 and the story came to me shortly thereafter. I have no idea why this was not the first book I wrote, I guess I was waiting until I had something else written before I went back and grabbed what I knew was going to keep the audience in suspense. Of course, like any story from the past, the ending is mostly known upfront, but it is how you get there that matters.

From the back cover: 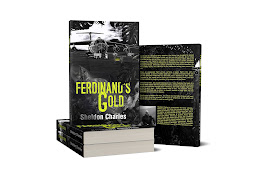 As the son of a disgraced army deserter, Dex Kevan has struggled to escape the dark shadow of his father’s past and his own bad attitude. An air cargo specialist for the US Air Force he spends his days counting crates, filling out paperwork, and trying to hold onto his girlfriend as his career prospects crumble. It’s 1986, and the Philippines is undergoing the ouster of kleptocrat Ferdinand Marcos. While Dex quietly continues his work at the Andersen Air Force Base, Guam, he’s oblivious of the maelstrom taking place across the sea.

When an unexpected flight arrives carrying a weary flight crew and a colossal secret –a cache of stolen gold bars – a series of events finds Dex and his associates embroiled in a plot that puts a bullseye on their backs. Tempted by the wealth and a future full of riches blinding them, the four Airmen commit to sneaking a portion of the treasure off the plane.

Unknown to them, the plunder belongs to Col. Talan Madulás, the head of a secret death squad. But the conspirators fail to consider what kind of person would steal and then smuggle such a treasure, and what lengths might they go to, to get it back.  Madulás’ bloody reign is over, his president fleeing. When his gold nest egg is stolen, he doesn’t hesitate to step back into his dark skills to hunt down the thieves.

Based on an incredible true story, Dex Kevan and his fellow thieves will learn that a man’s thirst for revenge can be just as dangerous as his greed and that no amount of wealth is worth an early grave.

Some early reviews of the book:

"... a fun weekend read. It's got adventure, mystery, and is quite thrilling. The author, Charles, is a rather skilled story teller with his ability to use his descriptions to make the words come to life off the page, I ended up reading this in 1 sitting. ★★★★★" Rory, Amazon

“★★★★★ A well-crafted espionage thriller with perfect pacing! Ferdinand's Gold had every element a good story should have. An intriguing plot, attention to detail, but best of all fleshed out, well-written and well-rounded character development. There’s an abundance of well-illustrated scenes that make you feel like you are right there in the story…It’s one of those stories that come along once in a while that makes you want to read it non-stop until you get to the end.” Piaras Cíonnaoíth, Emerald Isle Reviews

“Sheldon’s very brief synopsis offers the bait to seduce us into this terrific novel…once opened, the action and events and premises are so compelling that pausing the experience is not likely. Highly Recommended” Grady Harp, San Francisco Review of Books

"★★★★★ Each page keeps you gripped as you turn page after page, curious to know just what is going to happen next. The emotional grip of greed, mystery, and revenge all weave together wonderfully with the author's descriptive words"  Jason Mann, Amazon

As with any large effort, it is easy to label it the best you've ever done upon completion. I'll wait and see what a few more folks say before I give this book any such label, but I do think it is an excellent story with enough twists and turns to keep a demanding reader entertained.

I hope you will consider adding it to your late Summer/early Fall reading list. It is available in Paperback, EBook, and shortly Audiobook.

Posted by Charles Schell at 15:29 No comments: