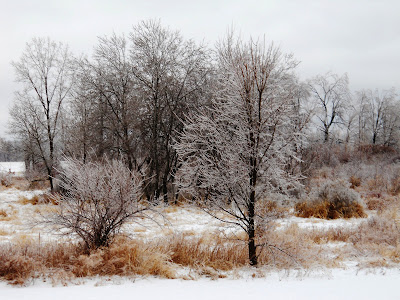 Several times over the winter I've gone out to the garage, pulled my Silverwing out placing it by the door, and started up to let it run. Originally, it was not my idea to keep my bike in the garage all winter long; my original plan called for full winterization and storage elsewhere. However, when the weather suddenly declined I was trapped, so I had added some Stabel to the gas tank, put her up on plywood squares, and added a cover to keep her from getting dirty. Not exactly full winterization, but sufficient to protect the bike.

I have actually been fortunate enough to ride every single month, at least once, since I bought the bike. This included December when I rode to work on a 30° day and January, when the temperature got up to 50° on the second. Now, I was sitting here in February under a foot or so of snow and roads that still had ice on them. Then came the forecast: three days of clear whether with a high of about 45° or so. They were mine.

The first day turned out to be a total loss. I got home late, and it was getting dark before I could even get the bike out of the garage. I checked the temperature and it had dropped below 30. Since all of the snow was melting this meant the roads had water on them that might refreeze, so – – I decided not to ride but to perform a safety check on my bike to make sure that everything was still working the way it should have been. It was. 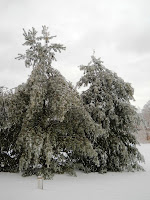 The second day was perfect. I even managed to go work a little early, quickly came home, and changed so that I was ready to ride. I pulled the bike out of the garage, pointed her down the driveway and then climbed on board. I could almost hear Ghost Rider calling out "Let's ride…" as I fired up the engine. She started on the first try, a good omen. I sat there a few minutes allowing the engine to warm up and selected a good song for the ride. I had discovered while dressing to ride that my Q2 was not charged so I was using the stereo on the bike instead of my headset. Once I had some Bob Seeger playing, I released the clutch and rolled on the throttle.
As I headed down the driveway, I checked the front and back brakes to make sure that the grip was good. No problems there as I turned onto the road out of the driveway. I brought up the speed and laid her into her first turn. I talked before about muscle memory but really didn't know how much of a difference it was going to make until now, as I prepared to turn out of my street onto the main road I realized that I had to down shift out of second without ever remembering shifting into it. At some point, my body was acting and reacting as it should without conscious effort.

On the main road, I shifted through all the gears and was pleased with the way the bike reacted and quickly found myself traveling at about 70 miles an hour. I made the green lighting continued down the road, to where? Who cares… I was riding again for real. I put my feet up on the highway pegs and relaxed into the feel of the road and my bike. 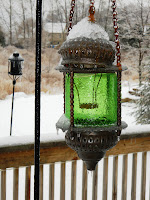 Since the last time I really rode, I had lost about 30 pounds. I hadn’t really thought about what a difference this would make until now. When I was taking turns I had to add a little more muscle for the missing weight, it wasn't a bad thing, just little difference for which I had to adjust. I road down all of the main streets in town and then headed down a small stretch of highway that separates the East and West sides of the city. The bike was behaving beautifully; it was as if I had never spent a winter ignoring it in favor of a car.

I was kind of wandering aimlessly, just taking rights and lefts at will with no firm destination in mind. I realized it was getting colder because the sun was going down and I looked down to discover that I gone almost 40 miles. So, I turned around and headed home. Thus ended day two.

The forecast for the next morning had changed and it was supposed to rain. However, when I looked outside it was not raining so I jumped on my bike and rode to work. Smooth ride, a few surprised looks – – did I mention that I was the only bike on the road the day before? Work felt a lot better having ridden in, and it passed quickly which put me back on my bike riding on that afternoon. On the ride home I did see another bike – – crotch rocket with rider plus passenger. We nodded to each other as we headed down the roadway side by side. The passenger on the other hand, was either so surprised at seeing another bike or was just really jazzed about riding --- she was waving at me so vigorously that I thought she was going to affect the rider's balance. At one of the streetlights, they headed one way and I headed the other.

As I pulled in the garage, the rain started. 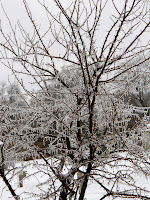 The weather forecast now had a snowstorm predicted for Sunday, but Saturday… Sunny and 40. As soon as the temperature hit 35, I jumped on the bike and was gone. I searched out many of my old runs down curvy country roads and even went by the location where my motorcycle safety class of been held so that I could ride that track. It was a full up blast.

When I finally got home, my son jumped on my bike and took off for a quick ride himself. He told me he saw at least two other bikes while he was out riding although I didn't see any when I was out earlier in the day.
The temperature dropped dramatically by the time my son got home, so as soon as he pulled it in I put the bike back up on the plywood and when it cooled, down covered it over again.

The next day the promised snow arrived and as I walked to the garage heading to the car, I patted my bike as I went by and said "Soon, Baby, soon"