Waiting For My Loot By The Mailbox

If you drove down the street where I lived as a kid in the late 60s, you might've seen me sitting on the curb out by the mailbox waiting on the mailman to deliver a package.  It would be coming from Battle Creek as a result of me sending two box tops and a $2.00 4 to 6 weeks before. I did a lot of that when I was a kid.

As I have mentioned before, I was a military brat, and as a result, the cereal I ate came from the base commissary (a food store on the base), and that cereal never had toys inside.  It had something to do with the way things were contracted back then (that has changed thankfully for all of today’s military brats).  With nothing inside the box but cereal, the only way to get something cool was to send away for it.

I can remember a lot of different things that I got that way, a magic knife that had a blade that disappeared inside the handle when you pretended to stab someone. However, it turned out to be less than 2 inches long, made of plastic, and looking very toylike rather than a threatening magic knife that I was hoping for. I also got a set of x-ray glasses, which did nothing to help me see the bones in my best friend's hand.  In fact, the only thing I can remember getting that was worth both the wait and the massive amount of cereal I had to eat to get the right number of boxtops was the Spy Master Command Belt with 11 different spy gadgets.  It was totally cool, and everything on the belt worked.

The belt made such an impression on me that I have spoken about it throughout my entire life and it wasn't until recently that I found out that I didn't get it from some super sugary Spy cereal but by eating some relatively dull cereal made by Post.

Anyway, my love of getting things in the mail started young and has pretty much stuck around my entire life. I like ordering items and having them show up later on. There is something special about tearing open a box to get at that neat thing that you ordered days or weeks before and exploring your new purchase. Somehow, going to the store to buy something was never as much fun. I think Amazon was at least partially aimed at adults like me. Anyway, Amazon is not the only one to take advantage of this quirk in personality – – through my son, I discovered something called Loot Crate.

In its simplest terms, Loot Crate is a 21st-century version of the Book-of-the-Month club, but it is targeted at those who fondly refer to themselves as geeks and nerds.  Loot Crate's mailings contain various toys, wearables, and miscellaneous fun stuff that is aimed at a particular theme. Their most recent box was themed Fantasy, and it arrived in my mailbox just the other day. 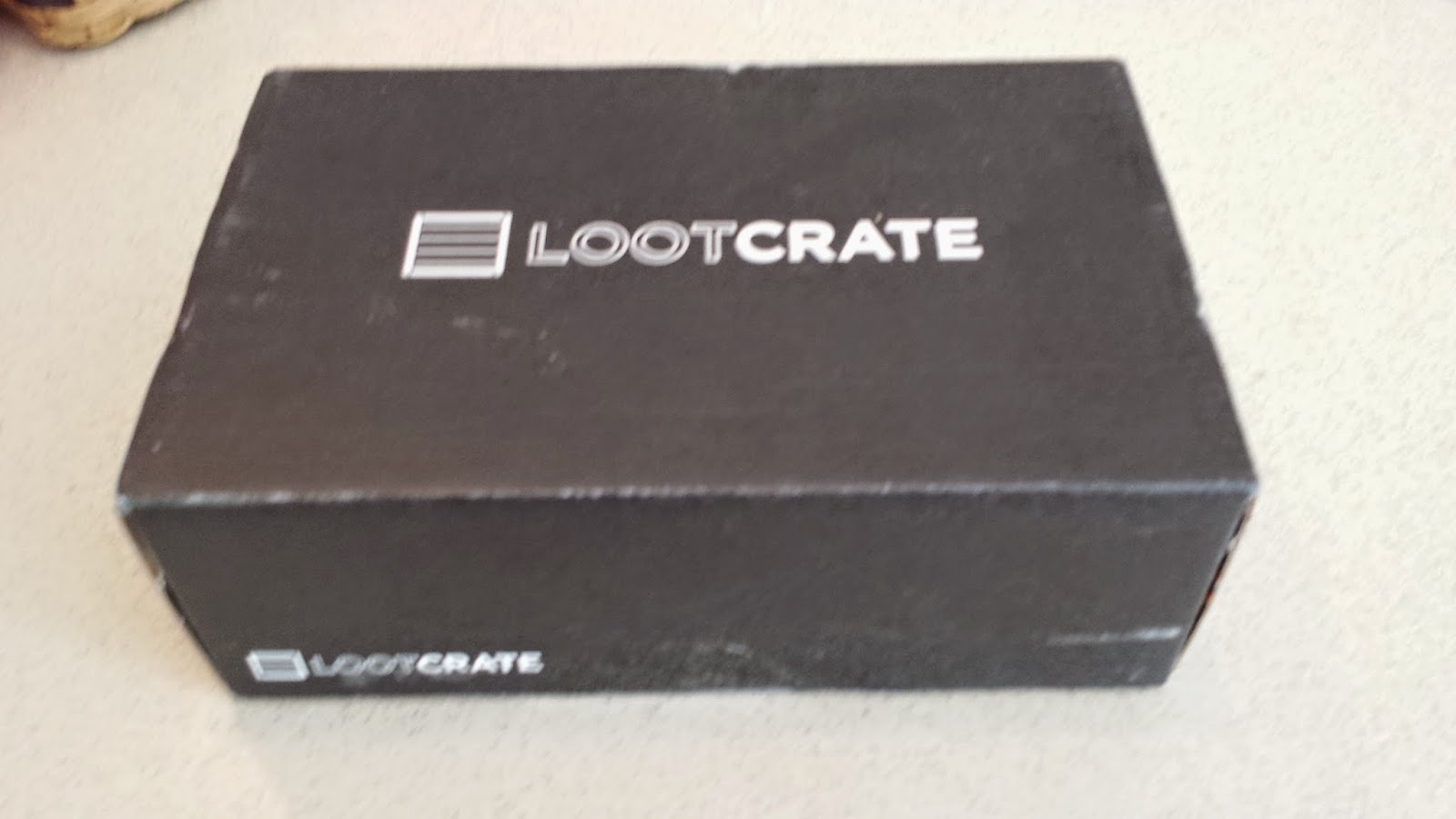 This was my first Loot Crate, and I thought the box was kind of small -- physically. I am really not sure what I expected, but I guess I was thinking it was going to be about the size of a shoebox and instead it was about half that size. No big deal, good things often come in small packages. And as I open the box, I was hoping that that old adage would be right.

First up, was a T-shirt with a Dungeons & Dragons logo on the front. Part of the information you provide when signing up for Loot Crate is your shirt size. Now I know why. 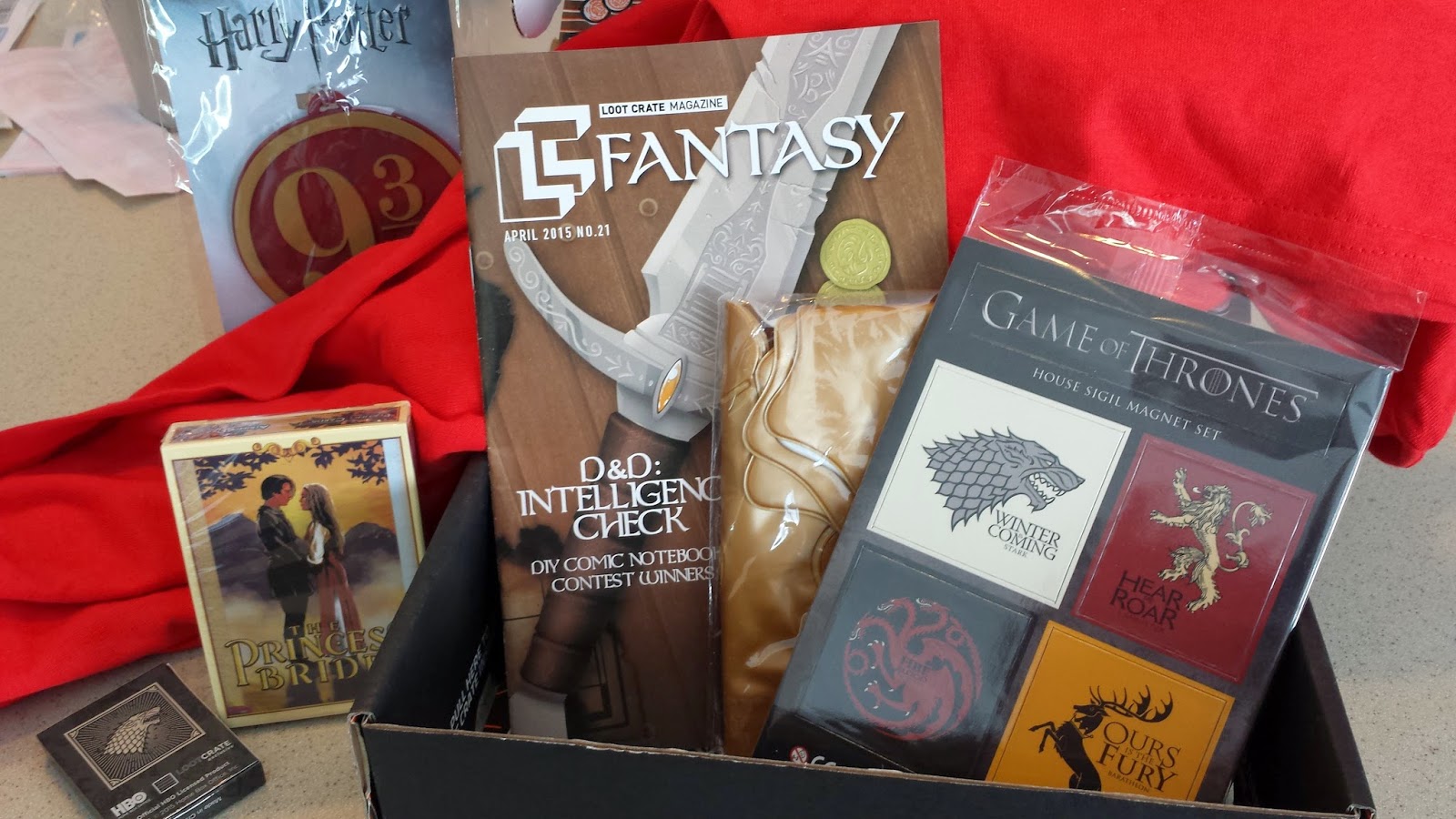 Next, I found an inflatable plastic crown, a deck of Princess Bride playing cards, a bow tie that featured various Dungeons & Dragons dice and dragons, a Harry Potter baggage tag marked 9 3/4, a collection of Game of Thrones magnets for four of the houses and a 4GB Stark Sigil flash drive.  Also included was the Loot Crate monthly magazine which provided tongue-in-cheek details about each of the items that were in the box. Proving that all things should be fun, the box that was used to mail the Loot Crate can be turned inside out to create a small table. 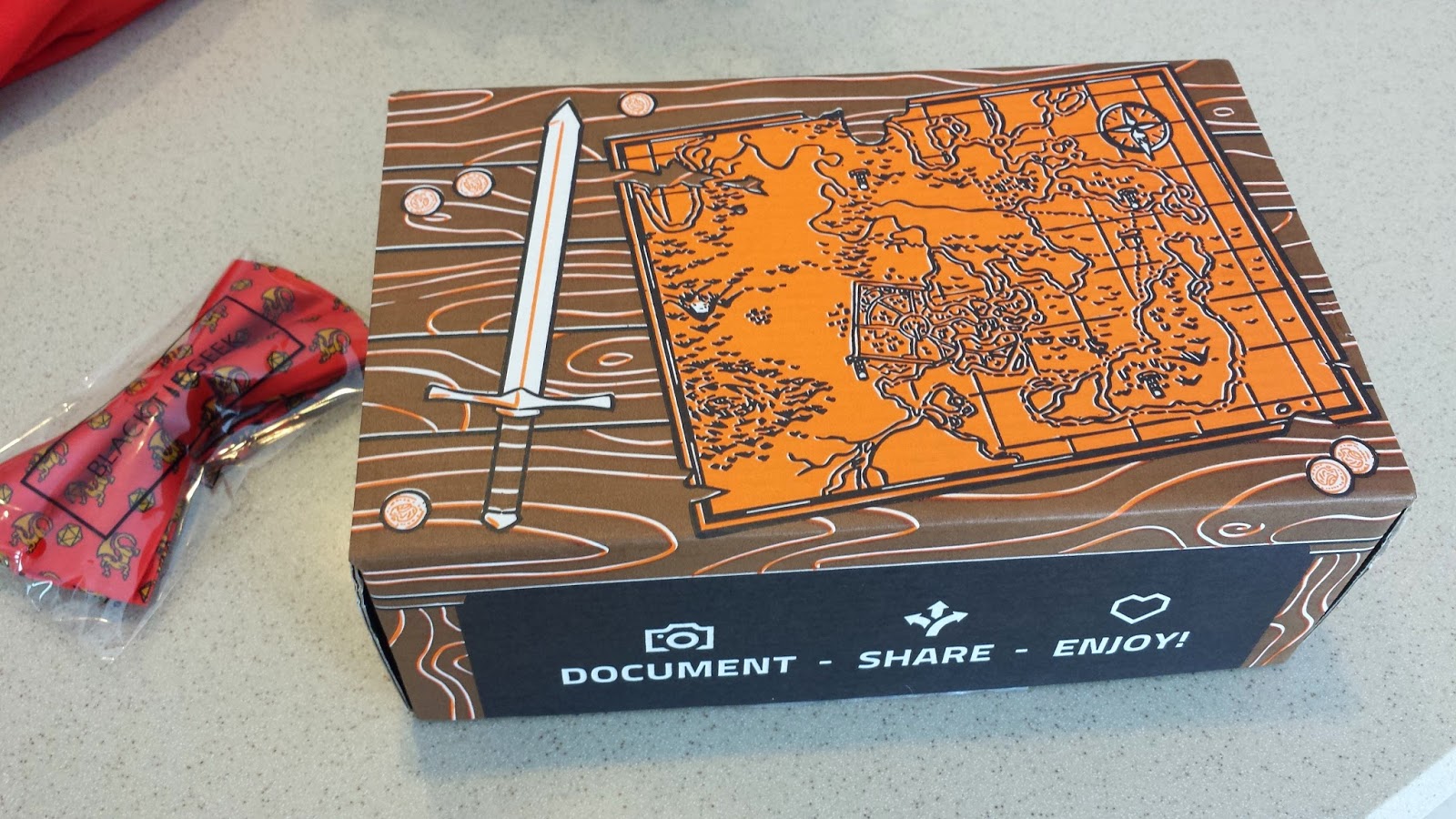 All in all, for 13 bucks and change (not including shipping and handling) it was worth it to be greeted by a little gift to me when I got home after a hard day at work. Not everything in the crate has value to me, but then things that I might particularly enjoy might not be useful to anyone else as well. I am guessing that I will continue my subscription as long as the balance of things that I enjoy outweighs things that I don't, but all in all, it was a good investment and very enjoyable.

Now, if the Loot Crate theme of the month is ever stuff you used to get with boxtops...they had better include the Spy Master Command Belt. I would order enough Loot Crates for every kid I know.
68,567
Posted by Charles Schell at 07:33