Velma. Was There Any Doubt?

During my adolescent years, we finally got cable TV and got access to the station out of Chicago, WGN.  The station, broadcast mostly reruns of early 1960s TV shows and one show that was broadcast multiple times a day was Gilligan's Island. I had seen the show when I was younger, but now I was in a different stage of my life and I started to ponder one of the great mysteries of the universe, that later turned into a pop psychology staple: Which do you prefer, Ginger or Mary Ann? 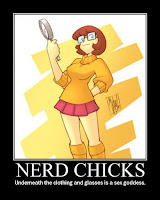 This was not just something I pondered, but I think any viewer of Gilligan's Island considered what they would do in that given situation – – surprisingly I had one friend who thought that Mrs. Howell might be an even better choice -- I always found people's rationale for their choice interesting to hear. They were so wide and varied and it was at a point in my life where it actually played into my own decision-making process as I considered their reasons and either added them to my own or rejected them. 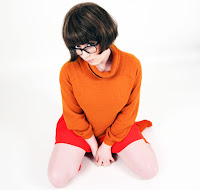 Eventually, WGN moved on from Gilligan's Island and started broadcasting a cartoon show in the afternoon instead: Scooby-Doo, Where Are You?  The show featured another group cast, and another of life's great  dilemmas: Velma or Daphne?  To be sure, you know you have entered a different kind of logic when you start picking between two cartoon characters for who would be the better girlfriend, but these are questions that must be considered and once considered totally justified in your own mind. For me, just like my choice from Gilligan's Island my choice was for the one less obvious.  Velma Dinkley was my choice and also the choice for lots of my peers. 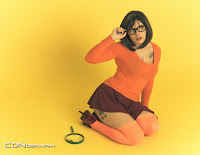 But why Velma? I'm supposing each admirer could give you their own rationales but there are some common cores that run through them all. First, the glasses. Glasses have a certain brainy nerd stereotype attached to them automatically, but this is just a visual clue to an ultimate truth:  Smart women are sexy -- but this is one step further than that. Velma wore glasses but also did not hide the fact that she was smart. So she had two of the essential elements of truly sexy working for her: smart and confident.

Velma had a simple and uncomplicated hairstyle that featured bangs.  Between that and the orange turtleneck sweater your attention was always drawn to her face. Daphne was a bit more confusing always wearing different outfits and scarves in her hair. Sure, a few years later Farrah Fawcett's hair would intrigue all admirers but for now the simple style of Miss Dinkley was easier to compute.

As mentioned before, she generally wore an orange, longsleeved, turtleneck sweater and added to that a pleated skirt, knee socks, and simple shoes,  Nothing complicated there, at least not on the surface.  Was she going for a hidden cheerleader look? And what was underneath that baggy sweater?  She was not ultrathin like Daphne, she had curves. She had womanly curves. Sure, most of this was imagined and put in place by the viewer who wanted to see them there but you cannot deny that her shape was one that was easily admired and relatable. Where I grew up more women were curvy than were sticks. As a result, I have always been in firm agreement that real women have curves. 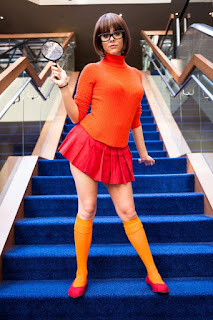 Her attitude was always semi-serious, as she set about vocalizing her theories of various crimes and at the same time she kept her sense of humor and was ready with a Scooby Snack when needed. She was appropriate for whatever the situation seemed to need her to be, with or without magnifying glass in hand.  Isn’t that what you would expect in a perfect girlfriend?  Daphne on the other hand, was mostly superficial and even extraneous.
Even though I can never recall seeing them in the cartoon, I had always imagined a smattering of freckles across her upper cheeks and nose that just added to her attractiveness.  Then, there was the imagined Velma. Who was she on a date? Did she do that magic transformation from library into wildly passionate sex kitten as soon as the lights were dimmed and the glasses came off?  Jinkies! 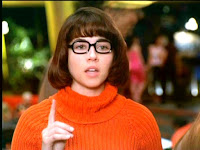 Velma would remain a cartoon only object of interest until 2002, when Linda Cardellini became the first live-action Velma -- I thought the casting choice was a very good one.  For the first time there was flesh and blood behind all of those assumptions regarding Velma and beyond that she was three-dimensional.  It was nice to see that imaginary choice as a living breathing human being –

But wait there is more, over the years Velma has turned into a Cosplay choice for many women. Not every woman can pull on an orange turtleneck and pull it off as an acceptable fashion choice. There has to be more. Agreed, we are talking about converting a 2-D image into a real person, but even so the facial expression and brainy nerd behind the eyes has to show through the picture or else it just doesn't work. Also, I have seen many variations in her hair color (I actually prefer red to the stock brown) and even race that still work.  I am not surprised that the many of the women choosing this Cosplay are also inked;  I always had a feeling that Velma would be hiding a few nice tats under that sweater. 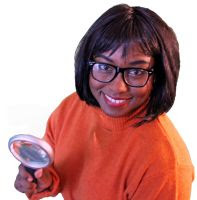 There is also a great website dedicated to Velma that includes discussion groups and an Ask Velma advice page.  Even though it has was updated last in 2013, it still has a wealth of great info, stories, and pictures.  Check it out.
So here's to you Velma, and all those who choose to Cosplay her, draw her, and those who (I am sure) fan-fiction her into a sexy beast we all knew she really was.

NOTE:  I always heard the Tina Louise (Ginger) was jealous that Dawn Welles (Mary Ann) got twice the fan mail she did.  In researching this I saw dozens of Velma Cosplay's for every one of Daphne.  Good thing cartoons can’t get jealous. 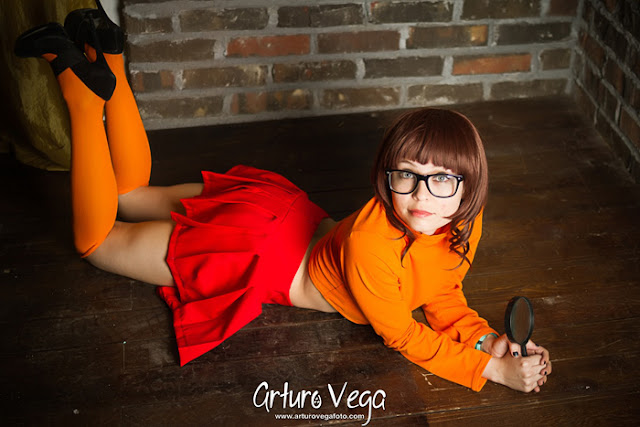