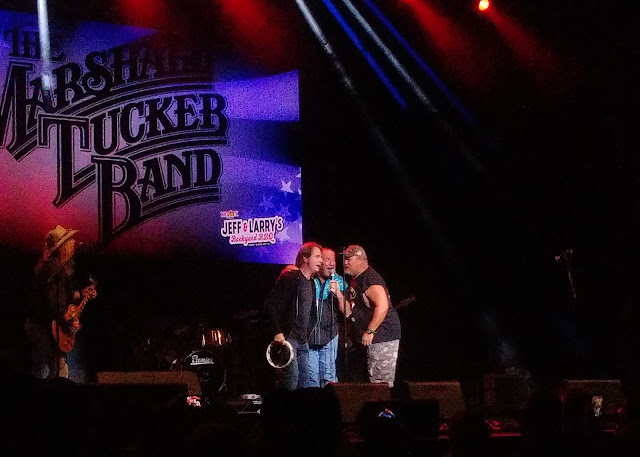 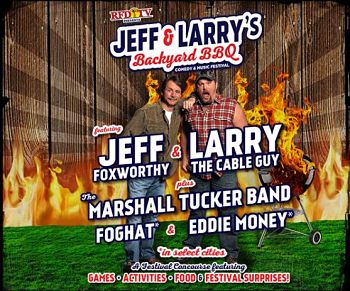 Jeff & Larry’s Backyard BBQ is a great concept.  A full evening of entertainment that starts with cook out foods, yard games, music, and comedy.  An MC guiding two headliner comedians, three headliner bands, and a local band.  Add some dancing girls, a comedian, and a sword swallower, and you have recreated burlesque.   Alas, that is not the evening we got.

First there no special cook out foods, just the regular bill-o-fare always available at DTE.  I would not have been upset if I had known this in advance because I would have eaten something I wanted versus all that’s available.  Had pork sliders and mac and cheese from Union Mac – delicious. Yard games – walked around the venue three times and never saw anything that looked like yard games.

A little after 6, Nick Hof got on stage and introduced the first band: Decibel.  The band was out of Indianapolis and played some wicked covers of metal, blues, and southern rock – plus an original tune.  Very enjoyable – would like to see again.

Nick Hof reappeared, did a short bit of stand-up, and then brought on the next act:  Foghat.  Foghat built on the mood the Decibel started playing their own style of slide guitar rock.  The set included both I Just Want to Make Love to You and Slow Ride,  I was happy to experience both Live.

Nick did some more stand up, a long break while Marshall Tucker Band set up and then Jeff Foxworthy came out.    My first time seeing Jeff live and he was terrific.  Some hilarious bits and even though his first You Might Be a Redneck joke was written less than 15 miles away, he did not use the phrase once.  Jeff bridged straight into Larry the Cable Guy.

Larry’s act was okay, he really didn’t seem to ever get into a groove with the crowd.  There were funny moments but not a real raucous set overall.

The final act of the night was the Marshall Tucker Band, on their 45th Anniversary Tour.  They opened with Heard It in a Love Song – one of my favorites.  I knew Toy Caldwell was no longer with the band so I was not expecting the same vocals – however, I was hoping for a close experience.  Doug Gray’s vocals were good but they were not the same, and it soured me on the experience – even though the band was pumping out great music.  Chris Hicks and Rick Wallis were both terrific.   On one song Marcus Henderson (keyboard and flute) took over vocals and did a fantastic job.  Maybe Marcus should sing more.

They closed with Can't You See, that was terrific and included Larry the Cable Guy on guitar and Jeff Foxworthy on tambourine and vocals.  They never played Fire on the Mountain or Searchin’ for a Rainbow – both favorites of mine and songs I was surprised they didn't perform.

Nick Hof deserves a lot of praise for not only doing good comedy sets but for keeping things moving and being honest about how much time there was going to be between acts.  He was great as an MC.

Note:  Eddie Money never played – and no explanation was given.  He was listed on the poster and ads for the concert.