Trek A Mile on My Wheels 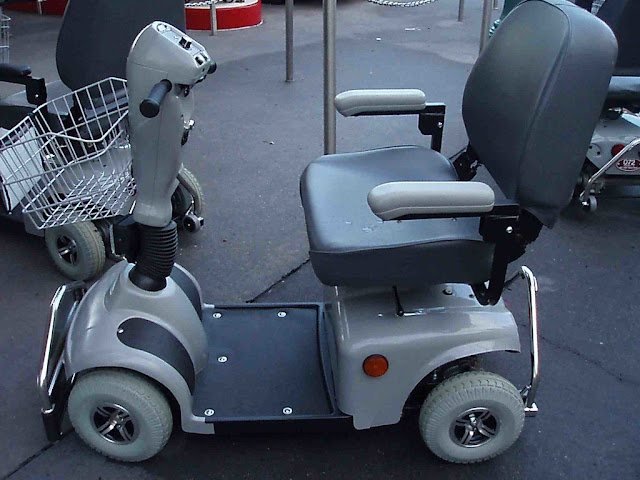 On my birthday, I went to Walt Disney World. Sometimes when a man reaches a certain age, he just has to ride Space Mountain repeatedly. This entry isn’t to comment about the actual visit, but something that happened during that visit which has led to an empathetic epiphany.

For a few years, I’ve had an issue with my left ankle. A few months ago, I finally got to the right orthopedic specialist who, thanks to fresh x-rays and a different viewpoint, informed me that the issue I have will continue to degrade the rest of my life without some sort of surgical intervention. Not exactly glorious news, but at least I knew what I was dealing with after speaking with him. Because of the ankle, I have issues walking long distances and sometimes have to take several breaks due to pain or stiffness.

After the first two days at Disney World, in which I clocked almost fourteen miles according to my Fitbit, I decided to rent an electric convenience vehicle (ECV), rather than continuing to suffer. ECVs have become more and more prevalent as the costs have gone down and battery longevity went up. There is a massive variety of these vehicles available, but as you might expect the ones that are rented out by WDW are the most basic model available.

Within minutes, I realized that even at maximum warp; the ECV was still at least a half step slower than the walking speed of the average Disney going adult. As a result, I had a continual flow of people on both sides as they passed my slow-moving vehicle. While I had no problem being passed by, it quickly made me feel like I was a hindrance to normal pedestrian traffic. I realized the unintentionally, I stuck to lesser used pathways to avoid the issue. This, of course, made me even slower because of the reasons those pathways were lesser used.

A common complaint that I have heard wheelchair users have is the feeling that everyone is looking down on them because of the height difference between the wheelchair and everyday societal life. The same is true of ECVs. When I needed to talk to someone, I usually attempted to stand up and straddle the vehicle so that I was talking to them I eye to eye. It was a luxury I had that most people in the same situation did not. I was trying to normalize the status I found myself in.

No matter how nicely the Disney cast members asked me if I could transfer from the ECV to a ride without assistance, I could always see people’s the facial expressions behind them. I was quick to point out that I could transfer without intervention. Somehow, I felt the need to belay the fears of the surrounding people who may have thought I would slow down their own access to the ride. Quick note here: WDW is great in the way it handles access for people with special needs and we should commend them. Since my issue was walking long distance and standing for extended periods, I did not use those accommodations because they did not apply to me.

Of course, the issues encountered were not all mine as I found that a vast majority of the people who walked past me when I was going slower had no issues suddenly stopping directly in front of me without warning. This happens as a pedestrian all the time, and fortunately most of us are agile enough to readjust our path to avoid a collision. It is not so easy and ECV that does not have active breaking nor turn on a dime steering. I think I avoided hitting anyone, but it was close many times. Just as bad were those folks who saw fit to cross directly in front of me without consideration that they might find themselves run over just as they would if they suddenly crossed the street in front of a moving car.

Texting while driving is unsafe. Texting while walking in an environment that includes ECVs is worse. I actually had a pedestrian collision because they were texting and walked directly to the side of the ECV. If we were both pedestrians, it might have resulted in a slight bump. However, when hitting several hundred pounds of ECV, the ECV will usually win. This time, it caused them to fall over on top of me and almost flip the vehicle over. I forgot to ask if their Instagram post was okay after the wreck.

The ECV served his purpose; it got me around and rather than dealing with sleepless nights because my ankle ached; I slept pain free. The lasting effect of using an ECV was to make of the challenges folks who use these or wheelchairs daily face clear to me. I know I’ve probably stepped around the wheelchair or ECV in life without a care as to how it might affect them. Likewise, I have probably stepped in front of someone unconcerned about their ability to stop or quickly maneuver their mechanical conveyance. Worst of all, I’ve probably watched as they made an inquiry about the necessity for help while allowing my expression to convey disdain openly.

We’re better than this. All we need to do is realize that the person on wheels is simply trying to function in society. We just need to know that we need to slow down around these conveyances and realize it does not hurt us just because someone needs a little extra help from time to time. 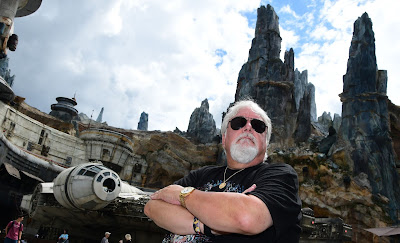 BTW, the new Star Wars section of the park is terrific.