A Straight May Not Beat a Full House, But It Does Win $50

Today I went on the Cereal City Poker Run and had a great time.  There were about 50 bikes on the ride with about 80 folks participating.  The ride itself was sponsored by the Cereal City Cyclists, a local riding group. 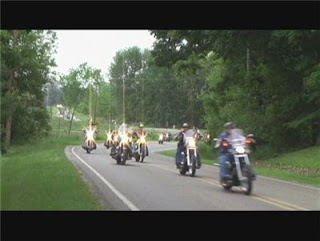 We started in Battle Creek and then rode south through Marshall, Colon, and Athens  stopping at various places along the way to share some friendship.  I arrived late,  due to some last minute maintenance on my bike, so when we took off I had not been briefed on what the hand signals for the ride meant.  So,  the first time the guy in front of me pointed down at the road, I thought he wanted me to see something.  As I passed byt he spot I noticed the roadkill and my first thought was "Okay, he is telling me he is hungry".  It didn't take long until I deciphered what he meant.  The hand signals of the riders in front let us know of road hazards, roadkill, and upcoming turns.

I had never ridden in formation before so this was new, but I easily picked up on it because of how experienced the others riders were.    It was awesome to be in that large group of bikers heading down the road.

At one place that we stopped, a VFW Hall, I had one of the best chili dogs I'd ever tasted and realized I had just completed another stage in my plan.  I had ridden to another city over 25 miles away and had a celebratory meal.

At  all the stops everyone was very friendly and outgoing and there seemed to be an instant ease and acceptance of folks who didn't know each other but shared a commonality. 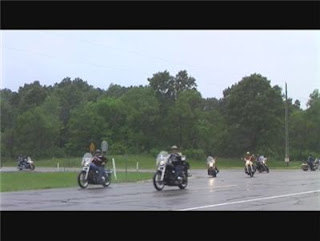 We did get hit by rain between the second and third stop but we just kept riding. Between the windshield and the fairings I stay fairly dry with only the lower halves of my legs and my neck and shoulders   getting soaked.  But, after the next stop the rain had ceased and I rode myself dry after a few more miles.  I did make a mental note that I needed to include a towel in my saddle bags.

At the end of the ride, we drew our cards.  I drew a 4 and a 5, then a 7.  When I set the cards down I purposely left the space between the 5 and 7 -- -- I guess I was feeling pretty damn cocky.  When I drew the 6, I think the guy behind the table almost fell out of his chair  -- I was in shock.  Then I drew a 10.  So much for cocky.  I paid an extra two bucks for another two cards; the first one out of the chute was an 8.  Can't make anything better on that so I took it and sat down.

I found out later I had placed third behind a Flush and a Full House.  It was worth $50.  So between the entry fee, the cost for lunch, and all the half-and-half and raffle tickets I bought, I broke even financially. But, I'd had a great time on a hundred mile ride with some new friends -- -- that was priceless.