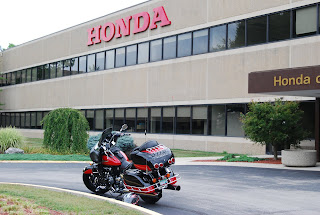 On my way home from my grandson's birthday party, I stopped in Marysville to take a quick look at the Honda plant.  This is where my bike was created back in 1999.  They do not make motorcycles there anymore, once they were done with the Valkyrie the plant was transitioned into car manufacturing.
After I took a few pictures of my bike at its birthplace, I hit the Highway heading west again and stopped at the next little town to grab some lunch.  After parking my bike in front of the Waffle House, a company that should be paying me for all these mentions in my blog, I cut the engine and got get off my bike.  As I did, an elderly woman came out of the diner and then gave my bike a rather stern look and frowned.  I braced myself waiting to hear something derogatory about motorcycles. 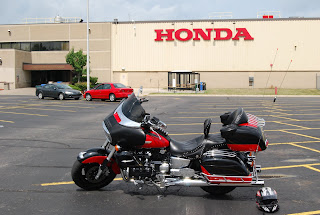 "Do you know why that bike runs so good?"  She asked staring at me with piercing eyes.
"No M'am" I said not sure where this was going.

"Because it is a Honda." She said forcefully “Do you know why that 1999 Valkyrie Interstate still looks so beautiful?"
I was impressed, I don't think I ever met a woman in her 70s who knew anything about motorcycles – – let alone enough to recognize both year and model just by looking at it. 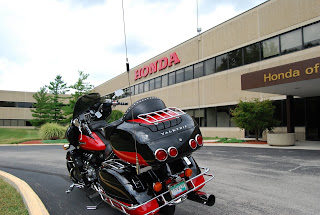 "No M'am" I said again.
"Because, we built it right here and we did a damn good job."  She said this and didn't bother to wait on my response or reaction – – she just continued on to her car.
"Thank you" I said to her as she walked by, she gave me a small wave with her hand but did not stop.
Now, that is pride in where you were from and what they do there.  Made me smile all the way home.