When I had my high school senior portrait done, it looked like this:

By the time my youngest son had his senior portrait done they looked like this: 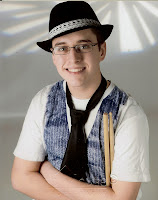 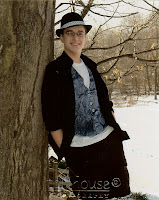 In short, things changed.  Even though I was a professional photographer for a number of years, I never took the time to do a lifestyle self-portrait of myself.  In fact, to my memory, I only ever did one self-portrait and it was a close-up of my face.  Anyway, fast-forward a bunch of years to sometime this past spring.

I signed up for something called GroupOn.  If you're not familiar, it is targeted coupons for the area in which you live.  One of the coupons offers that I received was for a location portrait to be accomplished by Zach Sutton at a reduced rate.  I looked at his website and if you look as well, you will see why I decided to have him do my pictures.  I contacted him to see if I could delay getting the portrait done until later in the summer, he agreed and I bought one of the packages.  I wanted to wait until I gotten my Valkyrie so I could have a portrait done with it.

A couple of weeks ago, I contacted Zach and told him I was ready to have the portrait done.  He asked me to scout for some locations that would allow us to shoot the pictures in a wide-open space so that he could be creative with the lighting and possibly add things to the photo later.  I found a good location in set up a date.

The first date rained out, but the second date worked and we met in the parking lot of an abandoned store.

The lighting was a little sparse, but very adequate to get the kind of affect that he was looking for.  Zach was doing something with lighting that most photography schools advise against, shooting into the sun rather than with it.  When you had some fill lights in the front you wind up with an almost 3-D effect that is very awesome.

First, he shot a few of the bike, then a few of me just in jeans and a shirt, and then some with full leathers on.

We talked while he shot pictures and got to know each other and it allowed us to work together very well.  I told him of the time that I spent behind the lens – – and we talked about working with models, temperamental brides, and other challenging jobs.  This was the first time he had worked with a motorcycle, although he had taken many of cars with people.

All told, he took almost 150 pictures.  Back in the days of film, this would've been very expensive, but thanks to digital photography one picture costs as much as 150 so you could shoot as many variations on a theme as you wanted to.

A few days later, he had the rough shots online for me to look at -- under the package rules, I was allowed to pick out 10 to have fully retouched.  I was able to swap the two 8 x 10 prints that were supposed to come with the package for a few extra digital versions.


My method for selecting the final lineup was to go through all the pictures and write down the once it interested me without regard to the total number of pictures.  Then, I did it again – – and then finally a third time.  I then took all three lists and compared them and anything that appeared on all three lists went to the top of my selection sheet.  Next, I pulled out the numbers that appeared twice – – at that point I was over the total number allowed so I went back and looked at all of those a fourth time and picked out the winners.

Due to my nature, I took a few moments and captured each one of those proofs and put together a slideshow with nothing but my top choice images, then let it play on my Touchpad as a slideshow for a few days to make sure I was happy with all of them.  After some final adjustments I came up with a set of images that I wanted and sent that on to Zach

Zach delivered these over period of about a week and a half, sending a few at a time.  I thought everything he did looked excellent.  He used a variety of techniques to include vignetting, sepia toning, conversion the black-and-white -- in addition to making corrections in the pictures like removing a distracting light source and correcting flares.  Really great stuff.

So, I survived my first shoot as a model.  It is not something that I would ever want to do as a profession, or even as a hobby.  However, it was a lot of fun and I like the results.  If you happen to need a good photographer contact Zach Sutton – – excellent work.