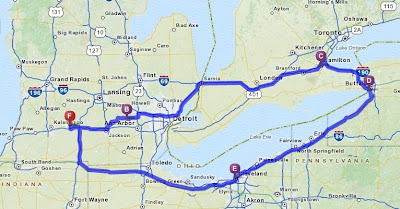 This ride was different from a lot that I have taken this summer.  I did this one completely alone.  This was not so much by design but just the way things worked out.  In addition, I really didn't stop and do anything on the trip – – I wanted to take one last long trip this season but really didn't have anywhere special to go.  Last year on my birthday, my son and I rode around Lake Michigan so after looking at the map I decided that this year for my birthday I would ride around Lake Erie.  In doing so, I would make my first real visit to Canada and do the first international riding I had done since the 80s.

Many years ago, I read the book Blue Highways by William Least Heat Moon.  It is the tale of a man who takes off in a used van on a journey of self-discovery by seeking out those old two-lane highways that cross this country.  It was a good read and it serves as inspiration for some of the trips that I do take. 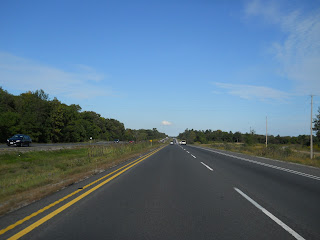 The narrative for this journey will be briefer than some of my others due to the solitary nature of the journey.  I took off at eight o'clock in the morning and headed towards the border crossing at Detroit.  The weather was supposed to be clear but it was overcast and a bit chilly.  I had on full leathers and even had the liner in my jacket.  The ride across the state to Detroit was smooth and I arrived at the easiest crossing to access only to find out that motorcycles are not allowed to take the tunnel into Canada.  So, I turned around, headed a few miles south, and took the Ambassador Bridge across.
As I said, this is my first trip to Canada but my passport is full of stamps from other trips I've taken in the past decade.  So, I was prepared for the routine questions as I went across the border.  The Canadian official found it very curious that I had traveled around the world, ended up in Michigan, and had been there for six years without ever going to Canada.  I explained I never really had a need to – I think she found this insulting. 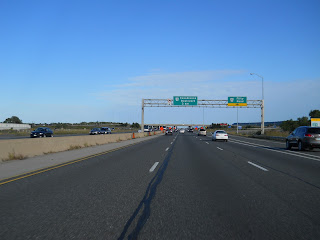 The interview then turned a bit more intense with questions about who I knew in Canada, why I was not even going to spend the night in Canada, and what was the true purpose of my visit.  When I told her that I was riding around Lake Erie as a way of celebrating my birthday, she asked the universal question "Why?”  Rather than thinking about the answer, I just blurted out "Because it's there."
I don't think either one of us expected that answer at that point.  She got completely quiet for a moment.  I was beginning to wonder if I was going to have to pay to cross the bridge again just to get back home if I couldn't get into Canada.  Then she smiled, nodded, and then laughed.
"You know, I have asked these questions for a lot of years and that's probably the most honest answer I think I have ever heard.  Welcome to Canada, eh." 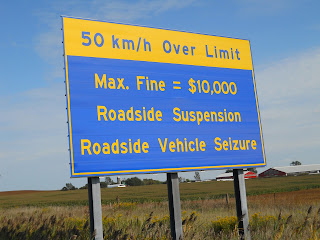 With that piece of business out of the way, I took off and rode down Highway 401.  I will tell you this based on my brief experience: Canadians ride very carefully around bikes and they have very well maintained roads.  A bit of a warning for other bikers headed that way, be prepared to deal with the metric system.  The sign may say 100, but that is 60 for those of us from the US.  Oh, and they are serious about speeding.  Caught doing 30mph over?  You forfeit your car and pay up to $10,000.
Another thing, I have always relied upon McDonald's when I ride.  As I have said before, they have clean restrooms, cheap drinks, and Wi-Fi.  In the 300 miles or so that I rode through Canada I only saw one McDonald's.  What they did have, was a lot of a place called Tim Horton's.  In fact, it seemed like there was a Tim Horton's every 5 miles --  oops 8 kilometers.  I ate lunch at one and had a good turkey with bacon sandwich.  They also had free Wi-Fi and clean restrooms.  There is civilization north of the border.
I was surprised how much more expensive gas was.  I was forced to fill up at one point during the trip and I put about $20 worth in the tank.  In the US, that would've filled the tank however in Canada it was only about half.

The weather continued to be cool but the scenery was nice.  A few hours later, I crossed the Peace Bridge into the Buffalo, New York.  The US officials only asked one question and that was if I brought anything across the border with me from Canada.  I answered quite honestly only the gasoline in my tank.  He laughed and made a remark about how importing gas from there wasn't cost-effective.  I nodded in agreement took my passport back and headed on down the road again.
This was the first time I've ridden in New York State.  My experience was riding from Buffalo to the Pennsylvania border via the interstate.  So, take what I'm saying with a grain of salt.  New York is the worst state of any that I've ever ridden in for motorists being aggressive towards motorcycles.  I was cut off, merged on, and carelessly left turned upon as well.  My Spidey sense worked overtime until I was safely across the border into Pennsylvania. 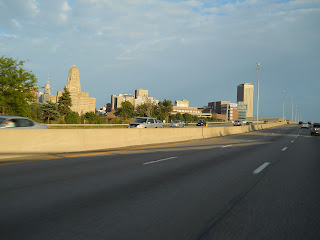 Pennsylvania was so quick it hardly made any impact on me at all.  Also, at this point, the sun was down and there was so much moisture in the air that the wind-chill became a factor.  I don't think the temperature was ever below 38° or so but it felt much much colder.
Once I was in Ohio, I decided that I was going to stop for the night near Cleveland rather than trying to ride all the way back home in one swoop.  I found a hotel pulled in and parked.  Usually, hotels let me park the bike under the awning near the door.  This Hampton Inn actually had me park it on the sidewalk up near their building.  Works for me.
The next morning I got up and headed out once again.  The sun was out and the sky was clear.  It was a beautiful day to ride.  I jumped off the interstate, and rode along Highway 2 for a while.  This went along the lake's edge and took me through several small towns.  In short, it was the kind of riding I look for. 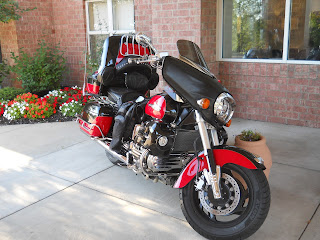 I made it home safe and sound after turning a quick 830 miles in 2 days.  I added two states in one province to my ride map, crossed off another Great Lake, and enjoyed the freedom and excitement of the open road.
A final note:
When I got near Cleveland I was extremely cold and pulled off the highway to look for some coffee.  As I pulled up to an intersection I found the road completely deserted due to the late hour.  As I've said, when I am stuck at a light and a particularly good songs on the radio I have a tendency to dance on my bike.  This serves two purposes, it lets me stretch a bit to keep from getting stiff while I'm riding and it makes me feel good -- even if it does embarrass my son if he's riding with me. 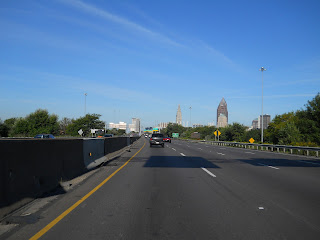 I was stuck sitting at the light because my bike was not heavy enough to set off the signal when Bob Seger's Old Time Rock 'n Roll started the play, I decided to do something I had never done before: I turned up the radio, dropped kickstand, got off the bike and danced.  Hey, I was cold, there was no one around, and I knew it would help warm me up.  As I was dancing I turned back towards the intersection and found that a car had pulled up and stopped on the crossing road.   I guess I didn’t notice because I had my helmet on.
There were many things I could've done at that point.  Because I was to beyond the point of caring what some stranger who happened upon me might think, I did what seemed to be the most logical – – I took a bow then continued dancing.  When I next looked over at the car, the occupant had gotten out and was standing next to her car dancing along with me.  I'm guessing she was between 35 and 40 and had some sort of work uniform on – but she had some moves.
When the song was over, I waved at her and jumped back on my bike and she waved back before getting into her car.   Then, we both drove away from our asphalt dance floor going our separate ways into the night.