Over here, people transition in and out very quickly.  In the month that I've been here I've gone to five going away lunches and welcomed three new people on board. It is a constantly changing landscape of people and personalities. In some ways it is actually better that way because there is constant stream of people with new ideas and energy looking at problems that tend to be the same day after day. Quite often, people compare working here to the movie Groundhog Day   because most of the time it is the same thing day after day.
People combat that feeling of sameness by personalizing where they can, and show a sense of humor when they can. I've said before that I work in what used to be a large warehouse. Inside that warehouse things are divided into cubicles and few walled offices. As a result, as you walk through the building you can actually see the workspace of most people. They are all decorated  differently and the personality of the occupant shows.
Almost all desks have at least one family picture -- -- parents, wives, kids, grandkids. About 60% of the booths have a photo of a motorcycle, either one they are preparing to buy when they depart or one that they left back home. Almost all desks have at least one stuffed animal on them. Some of the stuffed animals were sent from anonymous folks in the states while others are gifts from loved ones. A lot of desks have religious symbols as an outward sign of faith that the occupant has. Some have cartoons that are tacked to the walls -- -- most of which relate to life in the war zone.  It is having a continual sense of humor that helps most people get through the days.
At various places throughout the building are what is known as Freebie Tables, I will discuss those at length later. The other day I was walking by one of the tables and I noticed a small stuffed scarecrow on it. A short while later, I walked past the table again and noticed that someone had placed a sticky note on the scarecrow that said "Have you seen a Cowardly Lion or Tinman? I am so lost".  That gave me a smile. My smile got bigger a few hours later when I noticed that someone had placed a stuffed lion next to the scarecrow and crossed off the reference to Cowardly Lion on the Post-it note.

The following day, as I walked past the table on my way in the building, I laughed out loud when I saw that overnight someone had constructed a Tinman out of a Mountain Dew can and paperclips. The sticky note was missing as the three had been reunited at this point. On my way out of the building that night I saw that the trio had disappeared. In their place was a final sticky note: "Tell Dorothy we went on without her.  We will catch up with her in Emerald City.  Off to see the Wizard!"
It is bright spots like this that make every day interesting and more bearable. Although, I have yet to see a Yellow Brick Road around here -- -- I hope the three of them found their way okay. 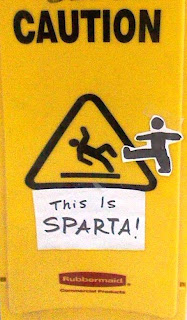 These altered warning signs that appeared in the building. They are used when the floor has just been mopped to warn people that the floor is wet and slippery.  You probably see them all the time.  What makes these unique, are the add-ons that were pasted to them. These were here long before I arrived, so I know that someone having a really foul day may have happened to walk down a hallway where these were being used and maybe it gave them a much-needed smile or just a slight diversion for a few minutes.

By the way, adding to the uniqueness of these is the fact that the humorists are usually anonymous.
Happy Easter!