Sand Day! (Like a Snow Day but Without the Fun)

When I was a kid I really enjoyed snow days. There was nothing like waking up and finding out that school was canceled. For some reason, even though you'd be rising at the same time there was a new motivation to jump out of bed, get dressed, and run outside. Hours would be spent sledding, building snowmen, and of course helping with the neighborhood snowball fight. Even as an adult I enjoyed snow days. On days where work might not have been canceled, if school was canceled I might give in to the temptation to take the day off and spend it sledding and being outside until chilled to the bone when I would head back inside in search of hot chocolate. There is absolutely no chance of any natural snow here, but this week I experienced my first Sand Day. 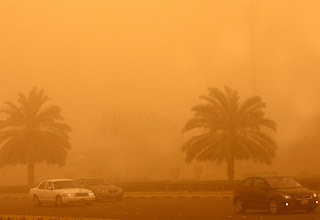 My alarm went off on Tuesday morning as usual, but when I open my eyes I noticed something a bit different. My apartment has windows on all sides and I leave the ones in the living room open all the time.  With the days getting longer, I am used to waking up and things already starting to get brighter; but what I was not prepared for on Tuesday was the fact that everything was a bright sandy Orange.  I did not have much time to contemplate this oddity because my phone started ringing almost immediately. When I answered I found out that I was going to experience a Sand Day since the roads were condition red. 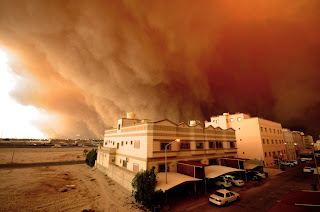 I've mentioned before about the fact that the ground underfoot here is not actually sand would very fine dirt.  In March and April, Kuwait experiences ground-level winds that causes a condition called rising dust.  If the winds last long enough the dust can raise in the air several stories where it is caught by the natural trade winds which move it forward. From a distance this almost looks like a wall as it moves along. There's a great scene in the Mummy movie where the sand appears to be moving across the desert like a tidal wave. It is really something to see, however being trapped by one is not so much fun.
From one of my windows I can normally see, between the buildings in front of mine, a barge that sits on the Persian Gulf. I'm not sure what the barge is there to do but it hasn't moved in the entire time that I've been living here. On Tuesday, I could not see the barge -- -- or the Gulf -- -- or the building in front of mine. It was just that bad. However, because the sand had an orange tint to it all of outdoors has an eerie glow. I realized I was trapped inside. 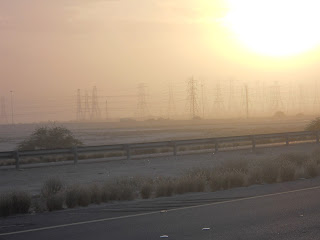 That was when it occurred to me that the only food I had in the apartment was some Triscuits, Diet Coke, some butter, and several packages of Pizza Hut ketchup. Not a balanced meal but a smorgasbord when pressed to become survival rations.
When the dust rises this badly, most people men wear a shemagh which is the full head wrap you may have seen in the movies that only leaves the eyes exposed. Go out during a dust storm and that whole look suddenly makes a lot of sense. I have not been here long enough to learn how to tie a shemagh yet so I use the more Americanized version known as a surgical mask. I back this up with a pair of sunglasses to protect my eyes and a hat to minimize glare. In the end, I look a little more like the Invisible Man instead of Lawrence of Arabia.

By sunset, the roads were clear again and a little evening rain was supposed to clear the rest of the dust out of here. The treat you get here when rain occurs is that during the first 10 minutes or so there is mud falling out of the sky as opposed to water. The raindrops on their way down clean the dirt out of the air and bring it all down in a mixture that leaves everything dirty but the filthy air gets clear. 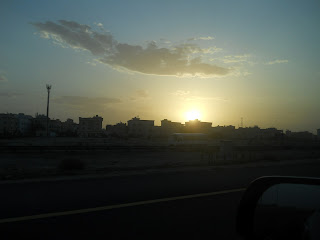 In the end I didn't build a sandman -- -- I didn't build a sand  fort -- -- I didn't participate in a sand ball fight and I didn't make any sand angels; but I did survive my first Sand Day.
The pictures I've included are not only mine but some are from the Kuwaiti weather site which apparently holds a photo contest every time there is a major dust storm. I wish I lived a little higher up in my building so I could capture some of the images that the other photographers have.  I also included pix from the base, but I am not sure who took it.
Until next week... 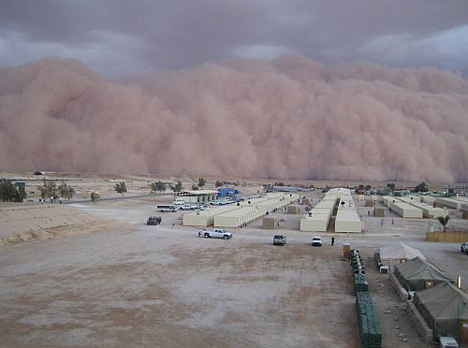