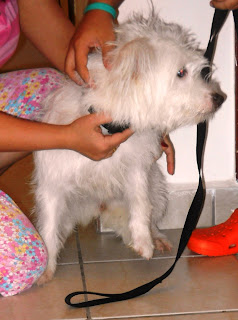 I have been fortunate enough to live in several different countries during my life. I have traveled to dozens more and overall that experience has been very positive for me and, I hope, for the people that I've met. A majority of the time I've traveled on behalf of the government and as a result have been in a unique situation when I've resided overseas. Rather than being an average tourist or an expatriate simply living in that environment, I've had certain obligations that tend to limit my freedoms while there. This is not a bad thing, it tends to prevent problems but at the same time keeps me from speaking out against things that I think are bad or should be changed. Realistically, as a nonresident it is not really my place to tell the country how to run this business anyway.

When I first arrived in Kuwait I met a gentleman by the name of Carlos who lived in the apartment building that I reside in now. Carlos has a fascinating history; he wound up in Kuwait after escaping the revolution in Libya via catamaran.  He was there working for an oil company and they put him here temporarily until they could straighten out where they needed to do and where they need to send him next. Eventually they decided to send him to Thailand, which is how our lives intersected.

Carlos and his family have a dog. The dog itself had a unique history because it was originally a gift given by a man that he works with to his girlfriend. However, before the man could give it to the girl, she dumped him.  So the man was going to take the dog out into the desert and turn it loose because it reminded him too much of the woman who had just broken his heart. Carlos rescued the dog. 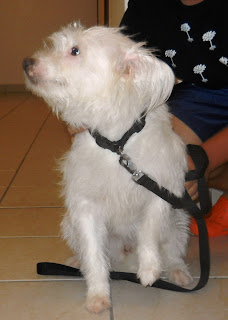 This is where our lives intersect. Carlos and I met at a party was given by someone that I work with and at the party I met the dog and was petting him when Carlos asked me if I would like it. The dog is a West Highland Terrier and it weighs about 20 pounds or so.  Originally I thought the dog was a Japanese Spitz based on his color and a few other characteristics but I found out later that I was wrong. Its fur is kind of wiry and pure white. Anyway, after giving it some thought I decided I would go ahead and take the dog and it could travel home with me when my tour here was done. I did some quick checking and found out what shots and paperwork was going to be required in order to take the dog home, it was no more than simple shots and validation of those shots.  So, we set up for me to take the dog when his family left for Thailand in June.

Originally Carlos told me that the dog was spayed and that it had been chipped.  I found out recently that the dog was not spayed but it had been chipped with its breed information etc.  Because I believe in helping to control pet populations, I called the international veterinary clinic here to make arrangements to have the dog spayed and get her shots taken care of. The vet assistant on the phone helped me with all the information I would need for the shots but when I asked about what I would need is for his paperwork later to export the dog she told me that I would not be able to export the dog due to its breed. Kuwait is one of many countries that have rules about what breeds of dogs can be imported and exported, mostly it is to prevent the importation of what are considered dangerous dogs and dogs that could be used for fighting. 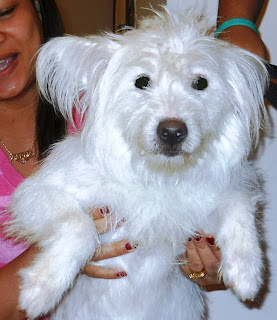 I was amazed that anyone could think that a 20 pound Westie could be considered dangerous or be used for fighting. The folks at the clinic were very patient in explaining to me that the Kuwaiti government rather than banning these specific pit bull breed chose to ban the entire branch of dogs that it belongs to and that covers all Terriers.  I might have been able to enter him as a mixed breed Spitz on paperwork, there was no way I was going to get around a microchip which positively declares the dog as a Terrier. To me it was going to be very unfair to the dog for me to take it for 9 or 10 months and then have to find another new home for it, so I will not be taking the dog at all.

In some ways it is frustrating when you run into something like this, but it does require some understanding that I am just a guest here and I'm required to abide by the rules and part of that is not questioning things even though sometimes they don't seem to make a lot of sense to me.

Anyway, I am going to try and help Carlos find another home for the puppy, since I know several contractors who will be here for years or permanently and will provide a more stable environment for the dog.