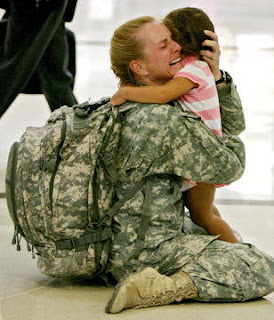 First, let me take a moment to wish happy Mother’s Day to all the moms. Everything you do is appreciated, maybe not today, maybe not tomorrow, maybe not next year, but eventually your child will be grateful for every single thing you’ve ever done for them.  Until that happens, I will tell you Thanks Mom.


Here at Camp Arifjan I work with a lot of Soldier Moms, and even a few Soldier Grandmothers.  Just like the picture, they are all counting days until they get home to give their son, daughter, or grandchild a hug, a kiss, and a tear.

This week… I was back to Groundhog Day. Really.  Nothing much happened worth mentioning, but after the last two weeks I was ready for a little Groundhog Day. So, this week I will talk about a few things that I saw that interested me and for some reason or another got my attention.

It has started to get hot already. In the past week we’ve had a few days where the temperature has been over 100°, many more on the way. What has been strange is the rain that is been interspersed and mixed in with the high temperatures. It is unusual to get the weird blend of whether we’ve had recently. But, it does keep things interesting; woke up the other night to massive thunder and lightning.  In the next few months we will get dust storms and then the temperatures will soar to over 110° and stay there until September.

Zain is the name of one of the biggest cell phone companies in Kuwait and the Middle East. It never occurred to me how genius the man was named the company until I had my recent Adventures through the Kuwaiti police system.  Zain is not someone's name or a nonsense word like Kodak; it is actually an Arabic word. Zain means, Okay, I agree or fine.  In other words, one of the most common words you might hear in a conversation between two people. Not only is the word common, it is also positive -- you are agreeing, everything is all right, everything is good. How genius is that?

It might seem trivial and maybe I just had a little too much time on my hands while sitting in all those Police Stations but can you imagine if Sprint or Comcast had gone with a name like "OK?" or "Agreed"?  Name recognition would've been instantaneous and with those words being spoken by almost everyone in the country many times a day – – talk about free publicity.

Zain was one of the six words I learned during my Adventure and it is one that I've managed to slip in to at least one conversation every day since. Zain? 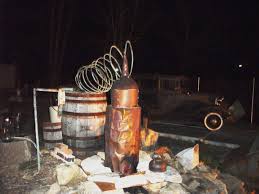 When I was a young boy, I went to the Bibb County Fair with my maternal grandfather. I had never been to a Fair before so I had no problem when my grandfather wanted to take me through all the livestock stalls and show me all the award-winning pies. One thing I remember mostly about that trip to the Fair was a display that was set up by the Department of Revenue.
﻿﻿﻿﻿
﻿﻿There were tables with bootleg and homemade license plates on them but what really held my interest was a still that they had on display. It was not working, but all the parts were there to include a big vat where the moonshine was processing with a fake fire underneath it. At the top of the vat was a coiled section of copper tubing which allowed the alcohol to cool prior to it coming out the far end into a holding jug.  There were other parts, to include a car radiator, I'm not sure what they all did but that image of the vat and the coiled tube stayed with me.

The other day while surfing a friend's blog I saw these pictures of a local alcohol still that had been closed down by law enforcement. Surprisingly, gone was the familiar coiled copper tubing but it seems that even though the vats have gone high-tech – – from metal to plastic – – this scuzziness of the process remains. According to the news article that accompanied the photo, this belongs to a pair of Bangladeshis who were now in jail. I'm not sure what the penalty is for making bootleg liquor in Kuwait – – but I will guarantee there is some sort of prison sentence attached to it.


I found this photo disturbing. Now that I've lived in the Middle East for some time, I am used to seeing women in abiyas with veils on. I can't remember ever seeing a woman with a black eye being hidden by the veil but from what I understand domestic violence is a real problem in Saudi Arabia, which is the origin of this particular advertisement. Interestingly, it is a government program that created the ad and is trying to create an environment where abused women can get help and justice.
The photo is very memorable; I hope that the Saudi government's actions will also be memorable as a positive step.
Pix(s) Of The Week
﻿