Thrill Me, Chill Me, Fulfill Me 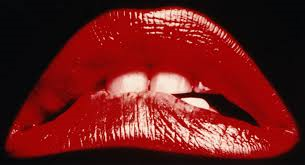 It was Christmas vacation in 1978, when I came home from college to visit my parents who had retired to a small town in northern Georgia. My parents had relocated after my high school graduation so the place I was going to visit with them was not somewhere that I had ever lived at any point during my life. As a result, I was going to be suffering through what was popularly known as the "weekend fix-up with your parent's friend's kids". In most instances, the minute you got beyond ear shot of the parents, both you and the person you were being fixed up with agreed that you would make the most of your time together but there was little that was really going to come of it.
I was told late one afternoon that it had been decided that I was going to go to a late-night scary movie with the high school senior daughter of a friend of my mother. My mother did not know the name of the movie, just that it was some kind of horror movie that started at 11 o'clock at night at the theater in downtown Augusta. Since I had no other plans, it was easy to be agreeable to this one. However, I had no idea what I was agreeing to at the time. 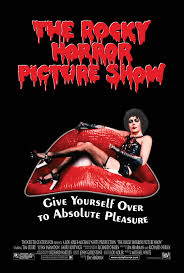 I can't recall her name anymore, but she and another couple we were double dating with came to pick me up for the movie that evening, and we headed into town. During the drive into town, I asked for the title of the movie and realized I had never heard of it but at that point it was too late to get out of going.  When pulled into the theater, I noticed that both of the girls were carrying large purses, but really didn't think anything of it. No one looked unusual in the lobby or in the theater itself once we got in and sat down. After getting seated, the girls started to hand out various props. When I asked what was going on, they told me that I would understand once the movie started. I was given toast, a newspaper, a squirt gun, rice, and a party horn. As soon as I got my allotment of goodies, I started to look around to see if everyone else was doing the same but it was too late because the light started to go down and the voices went up.

"Lips! Lips! Lips! ..."  In unison it seemed like the entire theater had started the chant, while clapping their hands in time -- and I joined them. I watched as the curtains opened and then upon the screen appeared a huge set of red lips. The shouting quickly died down, so you could hear the lyrics of the first song of The Rocky Horror Picture Show. For those of you who have been before, I made no mention of anyone in costume because the CosPlay ritual had not started in Georgia yet but that did not prevent the audience participation portion of the movie.

So as a virgin to the show, I learned when the say "Slut", "Asshole", "Where's your neck?" and many other phrases that added to the adventure that is the movie.  I held a newspaper over my head while I dutifully squirted water at everyone seated in front of me and was totally caught off guard when an old-fashioned cage elevator delivered the star of the show -- Dr. Frank-N-Furter from Transsexual Transylvania. I am proud to say that I quickly caught on to dancing The Time Warp after the first chorus and quite simply had a blast. The movie was heavily campy, but the songs were a lot
of fun with lyrics that had at the same time deep meaning and double entendre buried within them. 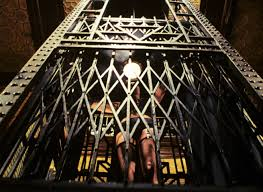 The evening ended with the ride home that was a lot more loose and fun than the ride to the theater. I put the experience in the filing cabinet in my mind thinking that that was the last time I would run into Frank, Riff-Raff, and Meatloaf.... Ah but I was so wrong.

It was less than two years later when the college I was attending showed the movie as a Halloween social event on campus.  Looking back, I'm surprised that they chose to show the movie given the fact that I went to school in the Deep South.    I, along with a group of friends, put together prop bags to take with us and even though all of us dressed up in Halloween costumes, no one was bold enough yet to show up dressed as any of the lead characters from the movie.   A good time was had by all and this time, after the movie, I bought a copy of the soundtrack so that I could enjoy the music  -- I admit it -- I used to sing along with  the chorus of "Touch-A Touch-A Touch Me".  Also, even though it reveals how long ago this was, I will say that I would've bought a video tape or DVD if either had been commonplace at that time. They weren't.

In the mid-80s, I flew into Okinawa because of a typhoon evacuation from Guam, and while strolling 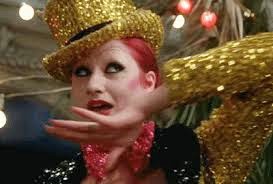 through the market section of the city I ran into a merchant with a table of videotapes for sale. Amazingly, one of them was The Rocky Horror Picture Show, but with Japanese subtitles. I bought it, and watched the movie again – – I will say it is not as much fun is seeing it in the theater with a group of friends and if you watch it at home you have to clean up the mess after.

I did not see The Rocky Horror Picture Show in a theater again until October 2014, when my Son and I it at a local theater just before Halloween. The theater was showing what was being billed as the sing-along version of the movie, and the cost of admission included a bag of goodies for audience participation.

I will confess that I did not know my Son had never seen the movie, I had always figured that at some point in college he had gone -- it was not your usual Father/Son experience, but that's OK.  He participated in the virgin deflowering ceremony and then we kicked back and watch the movie. I had never seen it shown with sing-along lyrics across the bottom of the screen, so for the first time I actually saw what some of the words were for the crowd responses. I had been saying some of them wrong for a lot of years. That's okay, learning the words from the people you went with was more fun.  Not sure when I will have another opportunity to see the movie, but I hope it isn't too long.

So what does it all mean?  I have seen the film with both male and female gay, bi-sexual, and straight friends.  Each of them probably found something different to take home at the end of the movie, from hedonistic to spiritual. The one message I have always taken away from the movie is a simple one ... Don't dream it, be it. 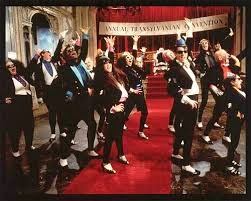