Great BBQ, Down at the Crossroads 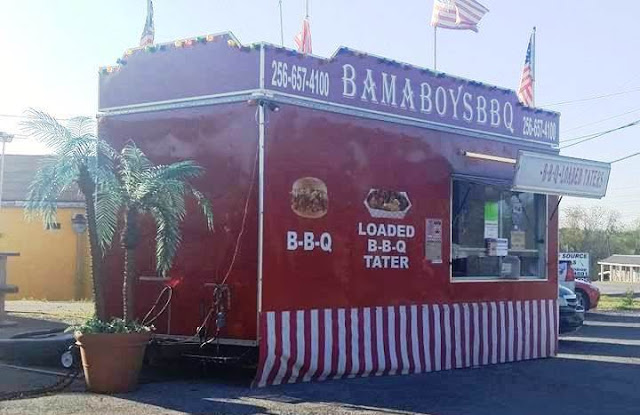 One of the best things about traveling by car is the chance to try out local eateries which lie somewhere in between where you came from and where you're going. As I was cruising from Huntsville Alabama to Atlanta, Georgia I was forced to stop at a red light in Henagar, Alabama. Because of that stop I was treated to the most delicious smell that was coming from a smoker located just off the road at Bama Boys BBQ. Now this place, as you can see from the picture, is not overly huge but it was just big enough to serve some of the best barbecue that I've had in a while.

I opted to just get half pound of pulled pork and some of their Spicy Sauce (they had Sweet and Hot as well), to go along with it. The meat was tender, moist, delicious, and flavorful without any sauce at all. The Spicy Sauce had just the right accents of heat that supplied a nice slow burn as I ate the pork. Not only that, they were generous enough to give me three helpings of sauce which was exactly the right amount for the portion of meat I was making a meal of -- I hate it when I run out of the sauce before I run out of the meat, although, in this case, the meat would've been delicious by itself.

So, if you find yourself at the top of Sand Mountain because you are cruising down US 75 or US 40 -- take a minute and stop and to enjoy some of the best roadside barbecue I have found.