My Year In Live Music 2018, Act III: The Steve Miller Band with Peter Frampton – Rockin’ Me with a Little Blues Too 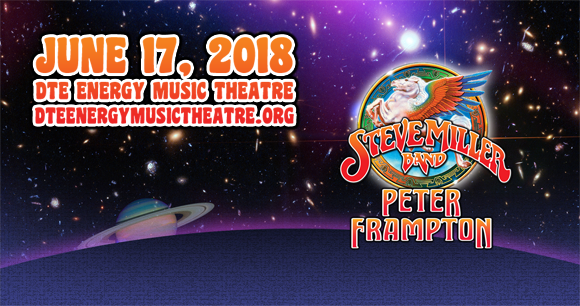 There are too many details as to how all this works to get into here, but if you are a veteran, I would recommend you check it out and sign up.    Short version:  They go out and seek donations (and ask that you help), they have a fair way to make sure every Veteran gets a chance at what tickets are available and the manage the administration of the distribution of the tickets very well.

I'm not entirely sure if you would if the performer listed as "with" on a concert poster is considered an opening act or not. But in my mind, if they are the first ones to appear on stage, they are indeed the opening act. I almost saw Peter Frampton two years ago when he was touring with Lynyrd Skynyrd. However, it was the year Skynyrd canceled and rather than attending a concert with just Peter Frampton, I opted to return my tickets. Frampton did the show anyway and I heard he put on an excellent performance and even did covers of several Skynyrd tunes.

Having seen a lot of groups from the 70s and 80s, I've come to except some slight degradations of talents and skills, but I have a feeling the show Frampton put on at this concert was very close to what I would've seen from him in the 70s. 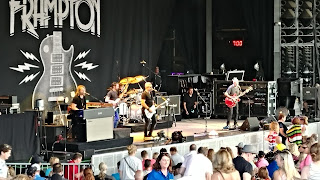 He opened the show with Something's Happening and then immediately moved on to Lying.  It was evident he was having a good time; his face was an expression of pure joy as he performed. His voice was excellent and is playing matched it as well. The temperature in the pavilion was over 90°, and it played against him getting the crowd fired up – – but he wiped the sweat off his face and kept playing to an appreciative audience and brought us all to point when we were ready to rock.

Of course, he played all my favorites:  Lines on My Face, Show Me the Way, Baby, I Love Your Way,  and Do You Feel Like We Do. The tunes brought back great memories and took me back to when I first heard the Frampton Comes Alive album. Frampton indeed came alive and gave one of the best live performances I've ever seen. He is indeed a master, and he enjoys giving the crowd exactly what they want.

Seeing a band perform or than once live, can sometimes be disappointing because you tend to compare one performance to the other. Also, having heard a set list once you really want to listen to it again? If the act is the Steve Miller Band, the answer is Yes you want to hear the setlist again – – every song is a winner. But even with the setlist being the same, they are not identical and Steve the band makes every performance unique, so it is impossible to simply compare two different concerts. 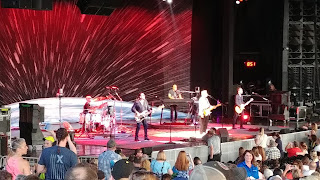 I won't bore you with a list of the tunes he played which I liked, take a look at the song list on their greatest hits album and you know what I heard.

One part of the concert I considered unique, in addition to at least three dynamite solo performances
by Joseph Wooten on keyboards, was a brief lesson Steve Miller gave about the triangle evolution of the blues. His theory was as the performers moved, the blues evolved-- forming a triangle from Mississippi Delta to Chicago (along with Detroit) and finally Texas. Having heard great blues from all those places and following his logic of the way employment drew the performers – – I agree with him.

After the lesson, Peter Frampton came out, and the two of them performed a Freddie King cover of Same Old Blues which was awesome and only outdone by their duet on an Elmore James tune, Stranger Blues.  I like Steve Miller for the SMB music I have come to love, and I like Peter Frampton for his mouth guitar music and dynamite guitar solos. But now having heard the two of them play the blues together, I want to know when they're going to release a blues album together. 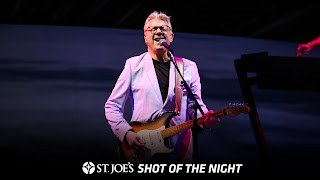 My favorite two songs tonight were The Joker and Fly Like an Eagle. Both songs allowed for featured solos from various members of the band but also took me on a mental journey back to the first time I heard each. The magic of music is when it is at its best when it can take you on an emotional and spiritual journey every single time you listen to it.

The night ended with a two-song encore: Jungle Love and Jet Airliner, which both featured great solos and were a great way to end the night.

The Steve Miller Band will always be one of my favorites, and I will try to see them every time they come to town, but now I have to add Peter Frampton to the list of bands I'm willing to see more than once because once is just not enough.