As Ashley cut my hair, she started talking about how her own hair changed as she grew up, going from dark to the honey blonde color it is today.  It caused me to reflect on my experience with hair color which changed as I grew up.   At age 5, my earliest recollection of such things, my hair was light blonde and then turned to dirty blonde around 7th grade before eventually setting on a golden brown in 11th grade. 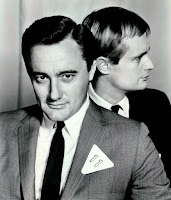 I recall being upset as I grew up because none of my heroes from TV looked like me:  Superman, Batman, Spiderman, the Green Hornet,  and Kato, Rowdy Yates, the guys on Time Tunnel, the GIs on Rat Patrol and Admiral Nelson on Voyage to the Bottom of the Sea. All of them had dark hair. In some cases (Batman) it might have been lighter but due to B&W TV, it all looked dark to me.  The only superhero of that age with blonde hair was Thor -- and I was not a fan.

Then came The Man from U.N.C.L.E. In brief, the story was about two secret agents, one American and one Russian who worked for the United Network Command for Law and Enforcement and they had the mission to save the world on a weekly basis.  U.N.C.L.E.'s arch nemesis was THRUSH, Technological Hierarchy for the Removal of Undesirables and the Subjugation of Humanity.  The show focused on two agents, a dark-haired American, Napoleon Solo (Robert Vaughn), and a blonde Russian, Illya Kuryakin (David McCullum).

Putting aside how bold it was to have an American and Russian working together during the middle of the Cold War, it was a turning point for me.  Kuryakin did cool things.  He was bold and saved the world -- he got the girl and didn't require a magic hammer to do it.  Most of all he was a hero I thought looked like me. 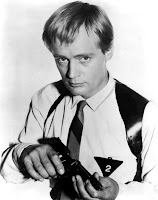 Every kid deserves to have a hero they think looks like them so they can identify with them some level. Therefore, it is essential a variety of people be seen as heroes.  By the way, it is not always about race -- it could be about something as simple as right vs. left-handedness, a specific physical characteristic or uniqueness, accent, faith or even something as simple as hair color.

When I was in college, I spoke to a CIA recruiter who visited campus.  They were looking for analysts -- since I wanted to be a secret agent, it never went any further.  Even though my career took me into technology, I can say with absolute certainty I was never part of THRUSH either.  But my hair turned darker as I got older leaving me with many choices for how I could fight evil.