I Got a Fever, and the Only Prescription...Is More Cowbell!!

In a little over two weeks, my son and I will depart on the Lake Michigan Quest for More Cowbell, From Sheboygan to Cheboygan. However, before we get to that I think I need to take a minute to explain the East Coast Quest for More Cowbell.
If you have never seen the Saturday Night Live skit with Christopher Walken as the producer for Blue Oyster Cult, please see the links at the bottom of this entry.
In the spring of 2009, my son and I were considering taking a trip to visit my father over Spring Break. Somehow, during the planning we also added a side trip to visit my other son in Virginia. We also wanted to see things along the way and by the time we were done adding it all we were covering 9 states and almost 4000 miles in under a week. In addition, we were going to take a long MacBeth, who was about five months old time, because he had never been on a road trip. Finally, because our car was not big enough to hold MacBeth's crate, we rented a Ford Explorer for the trip.
On the first day, we started calling our trip to Quest for More Cowbell. Therefore, as I posted updates on Twitter I started referring to it as the More Cowbell Trip or just the Cowbell Trip. Along the way, we took several pictures of real cowbell so we happen to come across.
Our first stop after leaving home was the Rock 'n Roll Hall of Fame in Cleveland. We happened to be there on induction day, so we got in free and had a great time looking at all the exhibits. We hid the road in ernest and all three of us shared the driving duties.  From there we headed across West Virginia and into Virginia to visit my other son and his girlfriend.
We all had a great time and even discovered a new eatery Five Brothers Burgers. From there we dipped south and went to Georgia to visit my father. Then we headed back north and went via Gatlinburg to Indiana to visit family there.  Matt even took time to ask folks about where to find more cowbell. 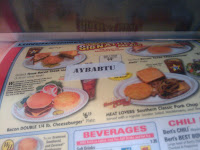 From Indiana, where we spent Easter, we headed on home. It was a great trip all the way around. The car had a satellite system so we listen to comedy channels during the entire trip and even founded a request or two. We also decorated several locales where we stopped with stickers that said "All Your Base Are Belong to Us" or "AYBABTU". I will not begin to try to explain that here; you can look around the web to find out more about it. Suffice it to say we were saying that we had been there.
Anyway, from that point on we started calling our annual road trips a Quest for More Cowbell. Therefore, as we come to the end of the riding season and it becomes time for me to do my last major test that I set for myself it is only appropriate that it become a quest for cowbell as well.
Our route will take us all the way around Lake Michigan covering a little over 1000 miles. Originally, I planned to do this 24-hour period. Nevertheless, when I gave it more thought, I decided I really was not trying to prove how tough I was but how well I had learned to ride under many different conditions. In addition, originally I was riding alone with my son trailing me in a car. Now, he was going to ride as my wingman. So, we will divide this up over three days and in the middle, we will stop and see the Harley-Davidson Museum as we pass through Milwaukee. 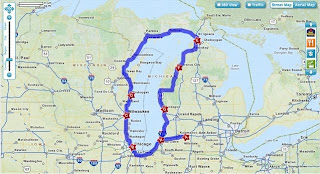 Cheboygan and Sheboygan? When my son was very young and we would watch cartoons together, he heard them refer to a place called Cheboygan. Now my son not being that familiar with American geography thought it was a made-up place not a real one. Since we are doing this kind of trip, I figured we would hit not only Cheboygan but also Sheboygan. I plan to look for a T-shirt only get there that says something along the lines of "I've been to Cheboygan, yes it is a real place".
Anyway, the trip is planned to take place over my birthday weekend so I will spend my 51st riding. How appropriate.