The Quest for More Cowbell II: The Trip Around Lake Michigan Part 2 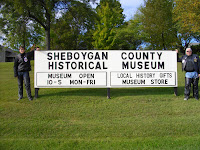 This section of the ride was actually somewhat boring. There doesn't seem to be much between Milwaukee and Green Bay except for flat. The clouds did finally clear and we got some sun that warmed us up. Up to that point we've been riding and about 60° weather and with the riding wind-chill it felt like 50 or less.
One stop we made along the way was briefly in Sheboygan. As explained previously Sheboygan was almost a quest all of its own. The one bad part about being in Sheboygan was the lack of a sign that said "Welcome to Sheboygan". After a 20 min. search, I gave up looking for one and we settled for this sign in front of the museum as proof that we had been to Sheboygan. With that mission accomplished, we jumped back on the bikes and rode. 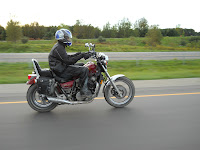 The sun went down, and we stopped for dinner. We enjoyed a nice meal and grabbed some coffee to warm up. After dinner, we made a brief stop to pick up an extra set of gloves for my son, as his hands were getting very cold.

This day of the journey was going to be the longest because there was no good place to stop what you get north of Green Bay and start coming back down the other side into Michigan near Mackinaw City. What we didn't plan for was how long it had taken us to get to this part of the journey. We were almost 200 miles from where we were going to stop for the night, the sun was down, and it was getting colder. Between where we were sitting and Mackinaw City there were few places and even fewer that would be open late.
There is a section of road as you move from going north to heading west, that is part of a National Forest. As you enter it in informs you that in the next 128 miles there will be only 12 places available for you to pass. As I said, it was dark and as we rode past that sign, I looked into the gully on the right side of the road and saw three deer bounding along in the same direction we were heading. My only fear was that anyone of them would make a left and go up onto the road. None of them did so it was just a nice observation. Somewhere in the first few miles, we went from going north to going...
East

As we cruised this part of the road, it got darker and the moon came out. The temperature continued to drop first to 50 then to 45 or so. To the right we could see through the trees and sometimes directly Lake Michigan. The moon was behind it and shining on the lake. It was actually very beautiful. If we had taken this part of the route during the day, we would not have seen that, nor would we have seen the stars when they came out. They were magnificent, millions of them since there was no city light nearby.

My son and I kept talking as we cruised through the night, occasionally he would want an update as to temperature and how much further until we were done with this section of our ride. At one point I told him it was 12:15AM and he wished me a Happy Birthday. I kept hoping for something to be open along the section of the road and there never was. Somewhere around three quarters of the way through, he asked if we could stop for a while so he could move around to warm up a bit. I looked out of the temperature it was now 38°. So, we pulled over to the side of the road.

There were no cars on the road as he did jumping jacks and other exercises on the side of the road trying to warm-up. I stretched my legs and arms and tried to get feeling back in my fingers. I was actually lucky because the bike had handgrip warmers and a seat warmer but the wind stole the heat as quickly as it came out. We were both wearing summer weight gloves, which also left our hands cold. He finally came up with an idea to put shorts on over his chaps and jeans to try to keep the part of his body that the chaps weren't covering warm. He said later it worked and helped a lot, although it did look funky.

We jumped back on the bikes and continued to ride. The road itself was very smooth and nicely laid out, the curves were wide and easy to navigate. It was actually fun riding except for the cold. Finally, the miles ticked away and we entered Mackinaw City. The first thing we had to do was fill up the bikes and directly in front of the station was a small café called "Family Food" that seemed to be the only place in town open. So, we went in and sat down.

Because the time zone change, it was way after one but even so, we both ordered coffee. I actually had to open up the creamer for Matt because his hands were shaking so badly. He held onto the coffee and warmed his hands and I did the same. We ate breakfast and drank about 4 cups of coffee each and finally the chill of the road went away.

We mounted our bikes and headed over the Mackinaw Bridge. This is one part that I'm glad we did at night because construction had taken it down to a single lane; I can imagine what the wait was like during the day. We crossed the bridge and then made a right to start heading...

As we were almost out of town, we came across two separate cops who had people pulled over with lights flashing. That warning kept us at the speed limit as we went from there to Cheboygan where our hotel was. We were just over 500 miles for the day.

While on the road, both here and during my Virginia trip, every hotel I ever stayed at was nice enough to allow me to park my bike almost anywhere I wanted around the lobby for security purposes. I always thought this was very nice and tried to be as considerate as possible when parking it so I didn't block any thing or anyone else. This hotel was no different as we parked our bikes just beside the main entrance. 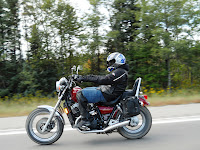 We slept late the next morning and missed our free breakfast. My son had seen a big welcome to Cheboygan sign, so we went there on our way out of town to take a few quick pictures. From there we went to McDonald's and had breakfast, then we hit the road. This part of the trip was a little rushed because we needed to be home by specific time so we could meet up with some other family for dinner.

The rest of the ride was uneventful but also some of the best riding we did. The road was somewhat crowded with many people heading home after the weekend but the traffic moved at a fair pace and we didn't have any problems maneuvering through it. The sun was out, it was warm, and the road had enough curves to be interesting. I shot some video along this part of the route:

My son did this video,  a little more creative than mine and fun to watch:


Overall, this year's Quest for Cowbell was better than last year's. Next year’s will be even better. Isn't that what a quest is supposed to be? Oh, total miles: 1149. 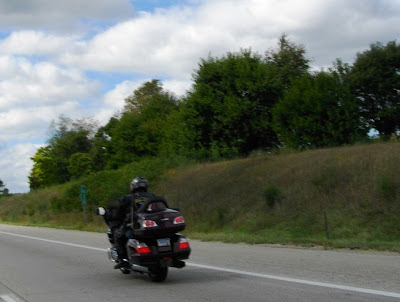