The Quest for More Cowbell II: The Trip Around Lake Michigan

Before I talk about how great, the trip was or what a fantastic time I had, I need to talk about the equipment that I used on this particular trip. 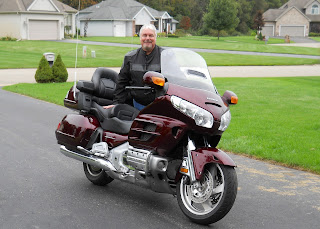 I did not ride my Silverwing, I chose instead to rent a GoldWing so I could road test it. What I got was a 2008 GoldWing 1800. It weighed in at just under 1000 pounds and had many toggles, bells and whistles to make a trip smooth and fun. The 1800 engine had power to spare during the entire trip. In addition, even though I did not take it all the way there, it boasted a top-end of 140 miles an hour. You would expect the bike that weighed that much and had that much power to be clumsy when it was sitting still. However, it wasn't. The weight was remarkably balanced and the bike handled at slow speeds just as well as it handled it fast. One additional "geezer guy” feature that the bike had was reverse gear which I found very handy when parked and having to back it out of his parking spot that was on incline. Overall, it was smooth, and quiet, and very easy to handle. Very enjoyable.

Recently, I had picked up a pair of Scala Q2 headsets. The headset allows intercom between up to three motorcycles, a hookup for an iPod, FM radio, and the Bluetooth for your cell phone. This was without a doubt the best accessory I have ever bought for riding with my son. This allowed us to carry on an almost constant conversation during our entire trip. It made the trip more like a joint journey than to individual journeys that happen to be going the same direction.
In addition, for the first time both my son and I would be wearing all of our riding gear. This means, that we were both wearing chaps and our leather vests in addition to our normal safety gear. Later in the trip, all of that leather clothing would come in handy not only to protect her skin but also to protect us from the unexpected cold. 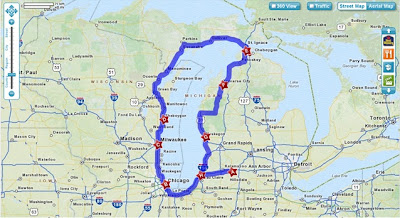 Now on to the trip, once we got on the highway we headed…
West 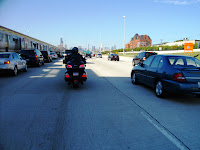 The first major destination on our trip was Chicago. It was around 156 miles from the house to Chicago and he gave us a good chance to shake down the bikes and for me to get used to riding the GoldWing. A lot of the ride was interstate riding but it was very enjoyable just the same. The weather was clear and the temperature about 70°.
We were briefly in the state of Indiana; by briefly I mean I think that we were only in the state for about 20 miles before we entered Illinois. Nevertheless, we do get to count it out on our states visited board. 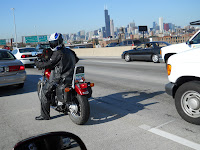 We entered Chicago just as rush hour hit. We actually got very lucky considering it was a Friday. The traffic never totally stopped and we continued to move even at its worst points. It was getting extremely warm though sitting still under the sun. Eventually we got to the far side of the city without incident. The next highway took us…
North 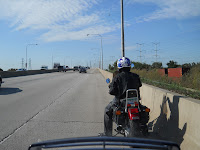 We exited Illinois and then entered Wisconsin. The biggest difference I noticed between the two states was the fact that we stopped paying tolls every 15 miles. I had been paying the tolls for both bikes whenever we hit one of these stops. However, at the last stop Matt decided that he would pay the toll for us. Therefore, after stopping at the booth I pulled through while he paid. That was when he discovered that he couldn't find his money. I pulled over and parked on the side of the highway then walked back to the toll booth as he held up all northbound traffic until I got there and paid the toll booth guy the three dollars. Fortunately, that was the last tollbooth we had to go through.
Our final destination for the evening was Milwaukee, but as we cruise northward, we passed by the most wonderful aroma of cooking over a mesquite grill and forced us to turn around, go back one exit, and sit down and have dinner. I am not sure why I thought that it would be quick for us to get into a restaurant on Saturday night, but somehow I thought it would be okay. However, when we got into the restaurant it was going to be a one-hour wait. So, we went to the bar and hoped for some seats open up. After about 15 min. to folks left, their chairs and we quickly moved into them. 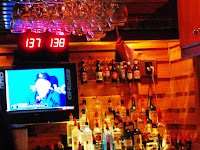 We ordered dinner and somehow ended up in a conversation involving a pregnant woman and her family on the opposite corner of the bar (who was celebrating her birthday) and a couple that was sitting next to us. Because of the way we were dressed, conversation quickly turned to bikes and riding. With a couple next to assuring their recent adventures and a planned charity, ride the next weekend. Everyone that I have met while riding has been open, friendly, and very helpful. The lady that was sitting next to me had been at the bar for a while and had obviously had a few. It was a little embarrassing as she kept putting her arm around me and her face close to mine -- She didn't meant anything by it she was just being a little too friendly.  By the way,  this is where we spotted our one and only cowbell of the whole trip.  Anyway, eventually our meal came and we chowed down, then went back out to the bikes and headed north again.
The hotel we stayed at was on the south side Milwaukee by the airport. The first day we had written a little over 350 miles and had encountered highways, interstates, Chicago would rush hour, road construction, and tollbooths. At least we were getting some variety. 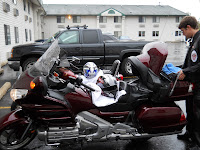 The weather report for the next day showed a 40% chance of rain. At some point in the middle of the night, I woke up to the sound of thunder and flashes of lightning as the bottom fell out of the clouds and drenched the city of Milwaukee. I woke up early the next morning but because I could hear the rain still falling I laid in bed until I went back to sleep and woke up at a more reasonable hour. Finally, I decided that rain or not we needed to get moving so I woke up my son and jumped in the shower. 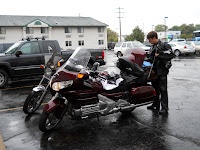 We went down, ate our complimentary continental breakfast, and then asked the front desk for a couple of extra towels so that we could dry off the bikes. We went out to the parking lot and dried the bikes off. Neither bike seemed worse for the wear. After we went back, grabbed the last for stuff out of the room, and loaded it onto the bikes the rain started again. Therefore, we pulled up under the overhang in front of the hotel and went back to the Continental breakfast bar have an extra cup of coffee.
After about 15 min. the rain stopped, we mounted up, and went out to hit the highway to go north again. It seemed like the entire interstate in the Milwaukee area was under construction. As we were entering the interstate, my son hit a metal grate in the road, which caused his bike to slip. He and the bike were just fine, but it did cause a slight delay as he took some time to gather his composure before we continued. I remember trip so that we would avoid the interstate, and any more construction. As we were about to head out of town the routing did take us onto the interstate for one brief section. When we were on that section, we saw the sign for the Harley-Davidson Museum. 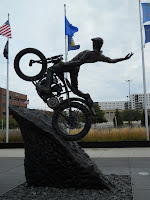 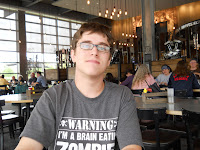 The Harley Museum was quite impressive and the buildings are beautiful. I liked the fact that if you were on a motorcycle you could park right up next to the front door. It surprised me to learn that there was a wedding going on in one of the conference rooms of the museum. However, I guess for some folks it is quite appropriate. We didn't have much time to spend there, so we didn't enter the main museum area but we did have lunch in the restaurant. Their chili is excellent. If you ever go by there, try it -- that and the peach cobbler. Anyway, with no more time to waste we headed out.
1646
Posted by Charles Schell at 20:48