Yet To Be Named Dog

Dogs are some of the most selfless animals on the planet.  Few humans are worthy of the unquestioning adoration and love that a dog is willing to give them.  However, for some folks the treatment of these loyal companions goes beyond mere indifference and into the realm of deliberate cruelty.

A recent article in Kuwait Times discusses one incident. [Link]

Karen,  the woman in the article, contacted me recently to offer me a chance to be a rescuer of a dog that had been abandoned.

I spoke before about the issues I had run into once before in dealing with dogs here, but this dog was a Maltese and not on the "no export" list.  I then received a flurry of pictures from Jean who was taking care of the dog in the interim.  The before pix was a little troubling, and my initial opinion was that it was not a dog at all but an angry, dirty mop.

The dog had been on the streets for at least a week, but was in relatively good condition.  His fur was matted and had to be sheared off which  gave the animal a totally different appearance.    Jean took him to a vet for an exam, got him shots and had him chipped, once it was verified he did not already have one.

I went to see him a few days after rescue and was greeted by an excited and friendly puppy who was ready to go home with me right then and there.  His face was happy and he enjoyed being petted and handled.  It was obvious that the animal had been part of a family at some point and was probably abandoned when his owner either left or went on summer vacation.

Anyway, Yet To Be Named Dog gets along fine with bigger dogs, as Jean already had a dog when she took him off the streets and rescued

As for me, I get some company and the non-judgmental acceptance, adoration, and comfort that only a dog can give - after a long day that is a very good thing.  I hope I can live up to Yet To Be Named DogYet To Be Named Dog plays a mean guitar. 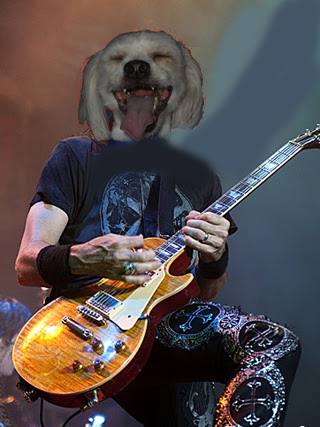