Did You Hear the One About the Welshman, the Brit and the Yank ? 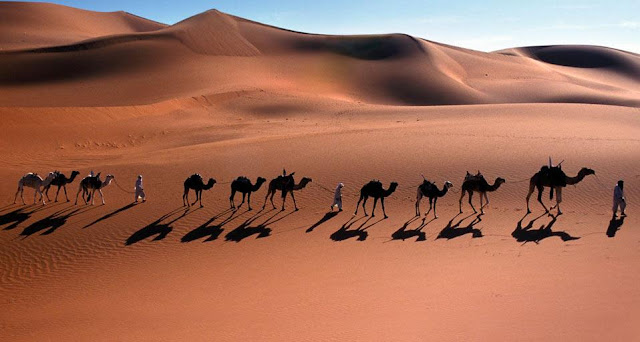 Seven items for the seventh day:

A herd of camels has taken up residence near the highway that goes towards the base.  A unique morning view but it has added to the danger of the morning drive because the fence between the camels and the highway has significant gaps, and the camels tend to wander.  The first week was tragic as a car and camel collided and the camel lost in a big way - of course, the car was far worse than any animal strike I had seen before (including a moose strike).  Surprised to find out later that everyone in the car survived.  There now a few boys who are roaming around amongst the herd to control the wandering camels.

I miss riding my Valkyrie, and given the dry climate in Kuwait, there are few people riding motorcycles.  Most of the local delivery people here ride Mopeds, so I was surprised when I saw a Honda 90 parked by the neighborhood pizza place when I was out walking with Falkor.    The delivery man came out when he noticed me looking at the bike, and after a quick discussion he offered to let me take the bike for a spin;  I thanked him and told him I would be back another time to take him up on his offer.  Next time I will leave Falkor at home and bring my helmet and gloves.  Of course, I brought them with me.

A Welshman, a Brit and a Yank were sitting by the pool.....  What?  No punch line,  it happened Thursday night about 11PM.  Gave me a chance to meet a few of my neighbors and share of stories of how each of us ended up in Kuwait.  I did get into an in depth discussion about motorcycles with the Welshman who offered to go riding with me when the weather cools off.

Strangest  event of the evening was when the Welshman complained of the cold and even showed the goose bumps on his arm.  The Yank checked and the temperature had indeed fallen from 123° to 115°.  Yeah,  cold -- gonna snow any minute. 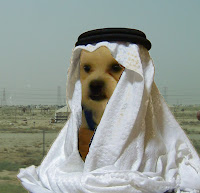 Falkor has calmed down and feeling secure in his new home.  Given that he  was a rescue dog this is a big accomplishment.  He doesn't get upset when I leave and entertains himself nondestructively during the day.

I sometimes leave the TV on for him while I am gone for variety.  Falkor likes Sponge Bob, just like MacBeth - maybe it is a dog thing.  He also gets excited when the Dora the Explorer theme starts playing;  might be the music,  might be that he likes girls with bangs.  Of course, he still hangs out with Mr. Bill.  His hair is growing out and he is looking more like the Maltese he is - he might be Kuwaiti born but he is quickly getting Americanized.

Ramadan continues, a few more weeks yet to go.  Occasionally a report like this appear in the Kuwait Times:

Two policemen were on a routine patrol when they spotted a man driving while smoking, so they stopped him. The man came out of his car and claimed the smoke they saw was "bukhoor" to change the smell of his car.  One of the policemen went to the car and observed that there was cigarette smoke, as a cigarette was found on the floor after burning part of the seat. The man was arrested and charged at Sulaibikhat police station.

When I was in Europe, I would occasionally listen to Voice of America on the radio (it used to be called Radio Free Europe).  A few weeks ago I found the VOA station here and listen to it from time to time.  They play American music, offer English lessons and teach American History - BTW I thought I knew a lot of American History but I am learning a few new things for example the Nonintercourse Act - not what you think.

It was the Cold War when I listened before and the agenda was pro-American, presenting an alternative view to what the Communist state run stations gave.  It has changed but not really for the better.  The reporting has shifted and now includes discussions of internal US political party squabbles, tilting towards the party in power.  Party differences are real, beneficial, and totally American but that friction is also an internal discussion.  In my opinion, what is being done now may make it more difficult when the other party is in power and has to deal with the countries where this skewed viewpoint has been  broadcast.  VOA is funded with taxpayer dollars so it should be neutral (and I mean that for either side).  Just one man's opinion.

Finally, the Earth moved on Thursday morning.  It was a 4.2 on the Richter Scale, which is not a bad jolt.  I didn’t feel it myself but I was already out in the desert at work when it happened.  When I first got here,  I mused over the what the ground under Kuwait must look like since they have sucked so much oil out of there.  With all those open spaces there now,  it is a wonder the country doesn’t sink.  Maybe it is.