Victory, From the Depths of the Ocean to the Heavens

This month two things happened that I thought were important, but mostly because an interest was planted long ago.  One was a success, the other was not - but both were victories. 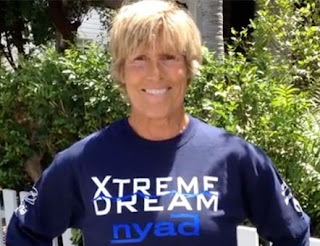 It was just after I graduated high school, I saw a TV report on an endurance swimmer named Diana Nyad.  One of the things mentioned in the report was that her last name, Nyad, is Greek for "water nymph".  The crux of the interview was that she was going to swim from Cuba to Florida swimming inside a 20 X 40 foot steel shark cage.  As a result of the report, I followed her attempt on 13 August, keep in mind there was no internet or CNN back then, so I listened to radio reports and watched the broadcast TV news.  She swam for almost 42 hours before her doctor removed her from the water.  She had been blown off course, but had covered 76 miles in 42 hours.  That was a big accomplishment even though she was not successful.

Nyad tried it again on 10 July 2010, 32 years after her first attempt.  She was now 60 and her rationale for making the swim:  "Because I'd like to prove to the other 60-year-olds that it is never too late to start your dreams."   This time weather delayed the swim for a year, and then after 29 hours she gave up the attempt because she had was suffered an asthma attack and was in pain after being stung by boxcar jellyfish - really nasty critters.   Earlier this month, she made her third attempt just 2 days shy of 63. 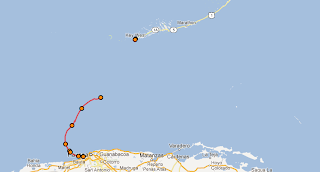 The attempt was called the Xtreme Dream and the attempt is documented on Nyad's Blog, the internet is a wonderful thing.  She swam without a shark cage, using divers to keep sharks away from her but could do little about the jellyfish.  I was one of many who contributed to make the attempt possible and even though she was not successful, I think she proved what a person can do if they put their mind to it.  She is inspirational.

When I was somewhere between 8 and 10 and my Dad was somewhere between Korea and Viet Nam, he woke me up in the middle of the night to watch one of the moon landings with him.  I remember lying on the floor in front of a black and white TV watching scratchy and slightly out of focus images as the craft landed, went through some checklists, and the astronauts got out to walk around.  This was not the first landing, but my Dad thought all the Apollo landings were amazing and worth seeing.  I agreed then and now.  I have seen many of the Apollo capsules in person in museums and seeing each made me reflect on what an accomplishment of science each journey was.  My career in information technology is a direct result of the space program.

I have watched the space program through my entire life; I even ate space food sticks and drank Tang.  I remember where I was for the disasters and the triumphs.  I even tracked the unmanned vehicles like Voyager and Hubble.  I was saddened by the termination of the shuttle program and the fact that our national program is no longer a government project for good.  I regret never seeing a space shuttle launch in person, but I did see two of the shuttles (Columbia & Endeavor) as they were flown back to Florida on the back of a NASA 747, and another in the Smithsonian (Enterprise).

On the 8th I felt renewed excitement as Curiosity touched down.  Being a follower of the Mars program I knew that two prior missions had ended in failure, one crashed the other just disappeared.  I was suspicious of both, and think that someone or something on Mars may have shot the craft down as they were trying to land.  How would we react if someone started landing on our planet uninvited?  Anyway, due to time differences I watched as Mission Control went nuts when they realized that the craft had indeed landed and was OK.  I felt pride.  The same pride I felt lying on that floor all those years before when I watched Apollo land.  NASA ROCKS!

Success?  Yes.  Massive victory?  Yes.  The resulting science and technology advancements that come from the Curiosity launch will result in life improvements here on Earth for years to come.  I would rather see the US launching a rocket a week in pursuit of science than all the government money that is wasted on pointless political projects and entitlements that get abused.

Unfortunately, I am just one man with one vote.  Oh yeah, I sent for my absentee ballot this week - that was totally a victory.

By the way, where is my jet pack?  I was promised by CaptainSatellite in 1964 or so that we would all have jetpacks by the year 2000.  Well?  Did I miss the day they were handing them out?  Fine.  If I can’t have a jetpack, I will take a hover bike: 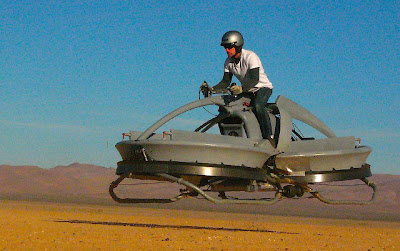 Note:  As I was doing the final proof read on this entry I got an email notifying me that Neal Armstrong, the first man to walk on the moon, had died.  RIP.