Did You Hear the One About the Sheik, His Wives, and the Ex-Wife?

In a few days, I will reach the five-month mark for being here. It's hard to believe that I've been here that long already; there are instances when time passes so quickly and others when every minute seems to drag. After five months here, I was finally sent on a trip outside of Kuwait as part of my job. Because of the level of my organization, we are actually responsible for several other countries as well as Afghanistan. But, because of the nature of my job, I can generally reach out and touch those locations without ever leaving my desk. 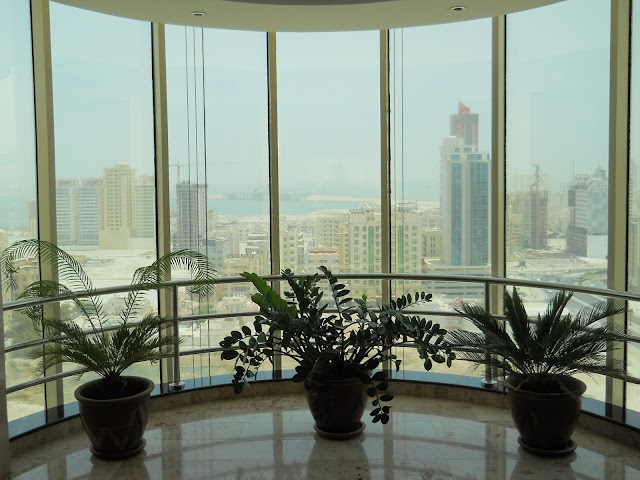 My first trip was to a place that I've actually been many times before, Bahrain, however, my trips before were all prior to the events of the past two years -- -- so I wondered what I would find changed when I got there.

Bahrain is much more westernized than Kuwait. I also find it easier to interact with the local population and to sample its culture. I think because there have been British ex-pats there for so many years the culture tends to be more open to non-natives.  I noticed no real change pre and post protest, by the way.

Near the Naval base is the compound that you see in this picture.  There are actually four homes of identical architecture within the compound, but as you will notice one is painted tan whereas the other three are white. The story that I've always heard regarding these homes is that they belong to one Sheik.  He built the compound and the homes and each of the homes was to house one of his four wives. As the story goes, he ended up divorcing one of the wives but because of court ruling or local tradition, she wound up keeping the house even though it was on the compound.  The Sheik, not wanting to lose the argument entirely, had the house painted a different color so that everyone knew that is where the ex-wife lived and that she was not part of his family.

An alternate version of the story is that the homes are owned by four brothers and the oldest brother had a big ego, so he painted his house a different color so that it would stand out.  Personally, I like the story of the Sheik and the ex-wife better -- -- it seems to better match the compound and is a bit more entertaining.

Never on any prior trip did I ever take the time to visit the Grand Mosque, even though I was always near it and would usually pass by several times a day. This time, I was determined to do things a bit differently and I was able to take an hour or so to go take a look. This was the first mosque that I've ever toured.  There are rules that prohibit US employees from entering any mosque, except as part of an official public tour.  The rule is to prevent any incidents that might accidentally happen if an American were to enter a mosque and accidentally do something offensive.  So even though I live half a block from a mosque I had never seen the inside of one. 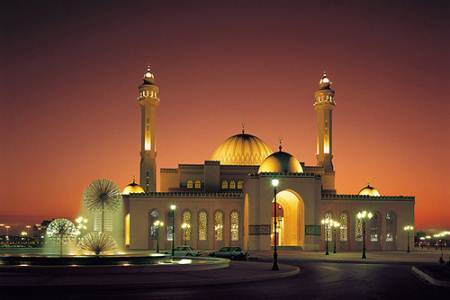 The tour was given by a student of the religious center there in Bahrain. His name was Solomon; he immediately saw the surprise of my face when he told me his name and acknowledged the fact that indeed it was a name with Jewish origins – he then went on to explain that Solomon was also an important person in the Islamist faith. He also explained that Mecca is important to Muslims, and should be important to any Christian or Jew as well, because that is where Abraham built the first church for the worship of one God, in doing so he gave birth to the three great faiths.

Solomon was a great guide, and explained how the mosque itself was of the world and not just Bahrain. In fact, the only part of the mosque that was made in Bahrain was the dome which I was surprised to learn was made of fiberglass.  The carpet was imported from Scotland -- that struck me as so strange. Here we are in the heart of the Persian rug making region and they go to Scotland to get carpets. The tile was from Italy, the globes for the lamps from France, and the crystals in the chandelier from Austria.  The wood is teak and came from India.  Interesting mesh of materials

It was explained how the congregation gathered for prayer and how they knew which direction in which to pray. The arch is a feature in all mosques and it marks the direction of Mecca. There is a secondary arch on the outside of the mosque which serves the same purpose but allows for a more traditional method of worship since it is open air.

Questions of politics were carefully avoided by Solomon, as well as me. However, he did point out several examples of behavior that was considered Islamic that was actually cultural -- -- for example women not being allowed to drive in Saudi Arabia. Interestingly enough, if the mosque is not carpeted you are not expected to take your shoes off upon entering -- -- the reason you do this in most modern mosques is to keep the carpet clean.

I asked him about the tent that was outside the mosque and what its purpose was, since it seemed to me out of place to have a structure like that on such groomed grounds. He explained that during Ramadan they use the tent to serve Iftar, the meal that breaks the fast at the end of the day, and that as one of the pillars of faith of Islam the primary guests at the tent is supposed to be the poor -- but that all people are welcome. With that he invited me to join in Iftar at the mosque, which I politely declined.

In my life I have seen many of the great cathedrals of the world, in Europe as well as the United States. I've also seen many synagogues, taking my time to do so while I am traveling. This was the first mosque I've ever seen and when Solomon asked me what most surprised me about the mosque I told him that I was surprised that it had such similarity to other houses of faith that I had seen and that it had stained glass windows.

Final note: After my posting regarding Ramadan I was delighted to receive an e-mail from a Masonic brother in Brazil. I had met Weverton when he was in Battle Creek attending a school. He said something in his e-mail that had never occurred to me when I was writing it: "You are speaking as a real Freemason, free of intolerance and preconception."  I consider that a huge compliment and it reminded me of one of the true goals of masonry which is Enlightenment. Sometimes you find yourself pursuing a goal without actually realizing that you are even heading towards it.