I Know Art & This Is Art

I have an appreciation for art.  Not performance art or ultra-modern neo ironic sponsored by the NEA art - but the kind of art that is visual and aimed at creating some sort of emotion or memory in the viewer.  When I first read an article about "Military Spouses Going Topless for PTSD", I was expecting to read that they were creating a calendar or something similar to sell to raise money.  What I found was art. 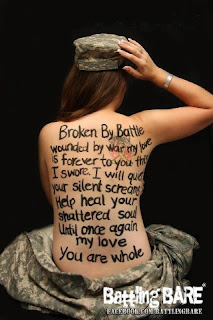 First of all, the term topless - while true - was being used primarily as an attention grabber by the press - all of the women and men pictured (yes there are men) have their backs turned to the camera.  Then, printed across their flesh are the words:

Broken by Battle,
Wounded by War,
My love is forever -
to you this I swore.
I will:
Quiet your silent screams
Help heal your shattered souls
Until once again
my love you are whole.
Battle BARE

There are actually several pledges that you can read here [LINK] 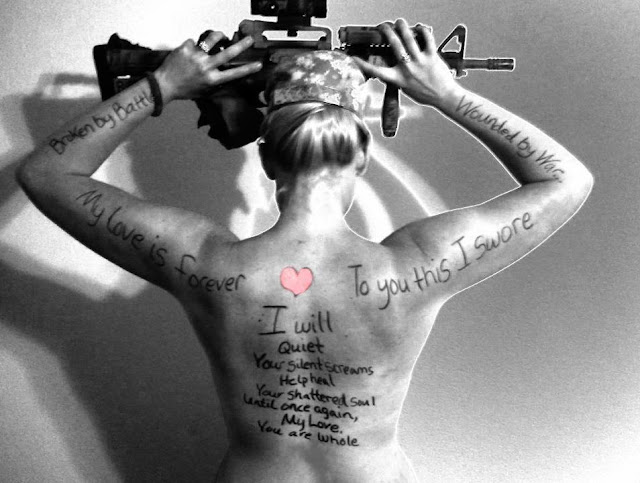 The organization, Battling BARE, is exposing who they are and at the same time proudly saying what they feel.  Look through the pictures on their Facebook page - many of which include extra poems and words - you can feel the support and love in each picture as well as the pain.

I did see some derogatory comments that were made about this project and to them I say:  Either understand and appreciate what is going on here or if you just don't get it, shut the hell up.  With people in my own family effected by varying degrees of wartime memories, Battling BARE has my support for their mission.  For the art I say thank you.

I read the English language papers here almost every day.  One of my must read sections is the Crime column.  I read it for two reasons,  I want to know what is going on in my neighborhood and there is also entertainment to be found there from time to time (I told you about the man who they picked up while he was out mermaid hunting or the blow up dolls customs found).

I have gotten used to seeing pictures like this,  someone arrested red handed with drugs, booze or other contraband put on display with the evidence stacked up in front of them.  The culprit is usually masked or has their face blurred but the stuff they got caught with is on prominent display, and has let me to ponder about how these pictures are put together.

In this photo, in addition to the drugs you can see a stack of cell phones off to the side.  Okay,  I guess that the phones were used to help facilitate the crime,  so I guess I can understand that.

But in this one,  there is a kitchen spoon.  I dunno.  Maybe the suspect used it to try to fend off the cops when their lair was raided.

Below is my favorite pix of all.  Look at the presentation of all the liquor.  I have seen stores in the States that don't do as good a job of putting product out.  It made me wonder if they have specialist whose job it is to arrange evidence for these pictures.  Look at the symmetry and balance - plus they even used the 3 sided label on the box as part of the display.  They really did a super job.

The charges facing the accused in these pictures are not minor and could lead to decades in jail.  I really have to wonder if in the end they thought whatever KD they made was worth it.  I would guess not.

The Lunchbox Effect that was in the Kuwait Times but what got my attention was this line:

"I’ve included small love notes, cards with Hello Kitty stickers or pictures of hearts and her name written in pink glitter. Sometimes she draws back on these and presents them to me when she comes home from school."