Your Other Most Important Vote of 2012

Since we,  the listeners, actually get to vote this year (for up to 5),  I will let you know my favourites.

Heart:  They made a lot of the music I lived, danced, and made out to in the 70s and 80s.    The album Dreamboat Annie was awesome.  Screaming electric guitars and strong female vocals  that made you feel the raw emotion of every single note.  Magic Man had one of the best instrumental interludes of the decade.  The only true rock band I am aware of (other than Fleetwood Mac)  that dared to put two women out front and center.

Joan Jett & The Blackhearts:  She loved Rock n Roll starting with her time in the Runaways and never stopped.  Joan dressed in black leather, wore dark eye makeup and had dark hair and eyes plus a sensual snarl.  Fine, she had my adolescent teen attention,  but it was the powerful rhythms behind the music that keeps me a fan.  Besides there was that night when I first heard Crimson & Clover - unforgettable soundtrack to a great night "such a sweet thing... I wanna do everything...what a wonderful feeling..."  Simple lyrics  that pack a punch because of her strong vocals and the driving band behind it. 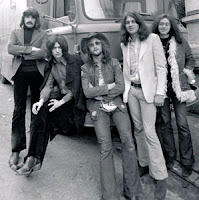 Deep Purple:  Creators of the most famous intro in all of Rock and Roll,  but they were so much more than that.  Machine Head was one of the first albums, other than those by The Beatles, which was good enough that I listened and liked every song on it. Woman from Tokyo is another of my favourites.   They defined metal guitar.

The Marvelettes:  One of many girl bands in the 50's,  had the first #1 record for Tamela Records  (one of Barry Gordie's Motown companies),  Please Mr. Postman; but their influence was deep and wide.   They were identified as the model used to create the Greek Chorus for the Broadway/Movie Musical The Little Shop of Horrors.   Three way harmonies with spot light verses taken on by each performer of the group.  Good stuff.

Kraftwerk:  Just a little Düsseldorf band.  They defined Krautrock and because I was in Germany for the early 80s,  I heard more than just Autobahn. I remember when I got back to the US and was watching Saturday Night Live and they did a skit called Sprockets -- its intro music was Electric Café - I wonder how many people watching knew what a great album that was.  Stripped down electro-Euro-techno with a bass and rhythm line underneath it all to move the song forward at warp speed. " fahr'n fahr'n fahr'n auf der Autobahn" - indeed.

Procol Harem:  Another intro that is instantly recognizable and how many other bands could pull off a rock lyric like "We skipped a light Fandango, turned cartwheels 'cross the floor"?  My High School friend Tom knew how to play one song on the piano,  and that was it --- A Whiter Shade of Pale.   The band's blend of orchestra and rock had never been done before and it eventually led me to appreciate other music that blended the two genres.  Check out Conquistador (live version is best).