A Guilty Pleasure with a Razor's Edge 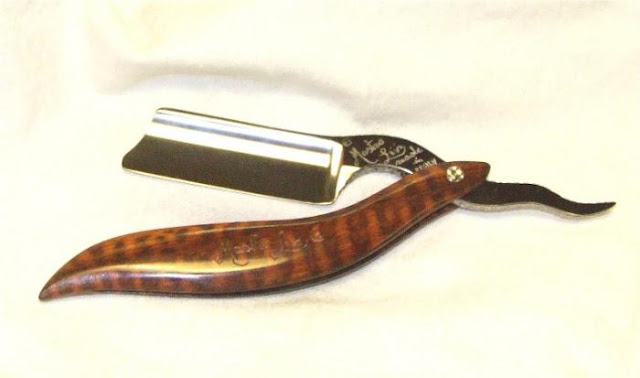 In 1981, I was passing through Atlanta's Hartsfield Airport on my way to my parent's house while on leave from Germany where I was serving with the US Air Force.  I was decked out in my best uniform and was ready to impress my parents -- the pride I felt was deep.  As I walked past a mirror, I noticed that I really needed a shave after my 14 hour flight.  So, I wandered into a barber shop and sought one out.  It was, without a doubt, the worst shaving experience of my life.
The barber was new or just unskilled. First she failed to leave the hot towel on long enough to soften my beard, then the razor was either dull or held at the wrong angle.  As a result I left with a spotty shave and blood pouring out of several cuts.  Years go by and I never did that again.
Guilty Pleasure lists have been around for a long time, but with better communication and social media people are sharing their own thoughts.  One of the things that is often on many of these lists for a man is a Traditional Wet Shave.  I have ignored this one due to past experience.  But, after being here for a while and seeing how it is done in Kuwait, I decided to try it at least one more time.  I am not sure they even do this in the United States anymore due to various blood borne diseases and I was concerned about that here as well.  Here they use a disposable straight razor which I have never seen before, so maybe they have adopted that in the US by now as well.

I went to my high end hair cuttologist Bilal at Spaloon and told him to finish off the haircut with a Traditional Wet Shave.  This surprised him because he had been trying to get me to do this for a while but I always declined.  He smiled and nodded then set about cutting my hair.  After doing a terrific job at that, he brought over a steam machine and had me lay back in the chair while he adjusted the device's jets towards my face.  This machine   takes the place of a hot towel here, and actually was not unpleasant. A gentle warm fog of steam was pulsing on my face rather than an overheated asphyxiating towel.  The vapor had a pleasant scent to it, but I am not sure it had anything to do with shave preparation.


After a bit, Bilal returned and made a big deal of showing me he was unpackaging a new razor just for me.  I was concerned a bit about the fact it was disposable -- ever use a Bic shaver? -- but being adventurous I let it pass.  He then put some sort of gel on my face, not heated shaving cream, and then proceeded with the shave.  There were no pulls or scrapes or cuts.  None.  Bilal used the razor to skillfully shave straight lines around my mustache, sideburns and goatee.  And in less than 10 minutes it was done.  After a moment he spread a bracing astringent on the freshly shaved area and followed it with a warm damp washcloth to clean off the residue.  The finishing touch?  A local aftershave which I can only describe as having pleasant frankincense like scent with some added spices -- an Arabic scent.

I ran my hand over my face and could not find a missed spot.  The edges around facial hair had a very sharp, well groomed appearance and my skin had a nice glow.  This must be the Guilty Pleasure that I had read about.  It was an utterly enjoyable experience and at 4KD (about $15) it didn't break the bank.  I can see doing this again at some point.  A Traditional Wet Shave, at least at Spaloon, is indeed the epitome of the term Guilty Pleasure.
NOTE:  I have received no compensation from Spaloon for the mention of their shop on this blog.  I do recommend both the shop and specifically Bilal for anyone needing such services.
Pix Of The Week
﻿﻿


I think there is an untapped cottage industry opportunity in Kuwait for people who can translate Arabic to English for signs.  It is so needed.

Pretty sure will never have a need for Funky Pooping, but if I do I guess it is nice to know it is available