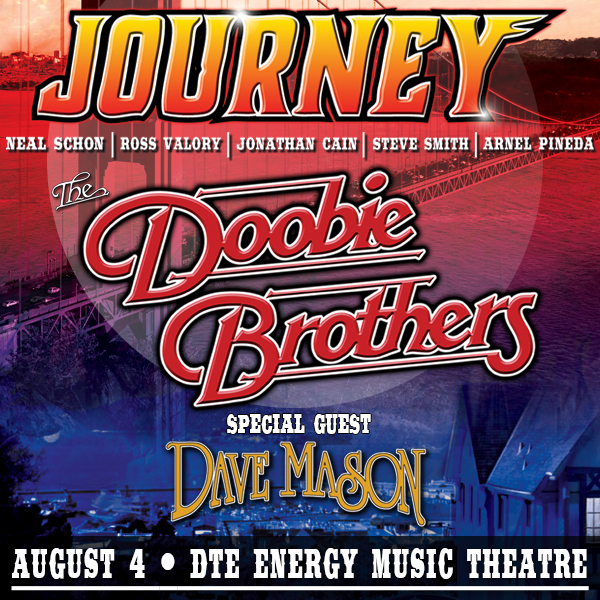 The show is formally billed as The San Francisco Fest Tour 2016, but I think many people found that confusing since the show was not in San Francisco but made up of bands that originated in San Francisco.   So, it was being called a Journey & The Doobie Brothers with special guest Dave Mason.  That works -- just make the music good.

Unless you are really into late 60s music, were a fan of Traffic, or track Rock and Roll Hall of Fame inductees, the name Dave Mason probably does not mean much to you.  He was the composer of one song, however, that almost everyone knows thanks to a cover done by Joe Cocker:  Feelin' Alright.  Dave mentioned before playing it that it was a two chord song that has been covered by more people than any other song ever written, if you count drunks doing a karaoke version of it.  He is probably right.  But this was another time when the opener could easily have been the headliner.

Dave's music is rooted in guitar blues with a dash of 60's psychedelic thrown in on top.  He even did an awesome cover of a Jimi Hendrix tune, having been one of the musicians who helped with the original recording.  Another song of Dave's that met with great success was We Just Disagree -- awesome lyrics.

His band line-up changed several times during the set as he brought up the Doobie Brother’s John McFee (guitar) and Marc Russo (saxophone) along with Journey bassist Ross Valory (nope, he did not dance).  As a result each song had a complete feel and well-rounded sound that is often lacking when a band is on the road.

When I was in High School, a friend of mine (Lelia Beakey) gave me the album Takin' It To The Streets for my birthday.  It was the first new album I ever owned and I wore it out.   I always liked the Doobie's style and vocal harmonies.   Growing up in the California Rock era, the band was a natural companion for a fan of Linda Ronstadt and the Eagles.

I enjoyed the performance as it was neither over produced nor overly complicated.  They played their hits, interacted with the audience and everything they performed was done well.

The set list, as I said, was all hits and the audience ate it up.  Most notable were:  Rockin' Down the Highway -- Part of my 50 Greatest Motorcycle Riding Tunes list for good reason, great road song;  Spirit --  Played totally acoustic,  sounded awesome;  Takin' It to the Streets -- brought back memories for me;  Black Water -- one of my favs (and the name of my first and only garage band); Long Train Runnin' -- Always loved dancing to this; and China Grove -- another of my favs and a great dance tune too.  They performed two encores:  Without You & Listen to the Music (my favorite Doobie Bros tune)

Overall, I considered the performance to be flawless and effortlessly enjoyable.  Just sat back and enjoyed every note played.

The first thing that comes up when talking about or going to see a Journey concert is "who" you are going to see.  Journey's make up has been fairly consistent over the years, with the exception of the lead singer.  There have been 4 of them to date.  The one who is most widely known and rightly admired for his vocal prowess is Steve Perry (and this will be the only time I mention his name).   But it has been 18 years since he has even performed with the band -- it is time to let go and decide if you are a fan of him or of Journey.

Arnel Pineda is the current lead vocalist with the group, and whereas I was curious and leery as to how he would sound,  I will tell you that he has tremendous range and power in his voice and every song I heard this night was indeed a Journey song.  Arnel also has great stage presence and performs as a true member of the group and not as a typical front man/vocalist.  I have never seen another iteration of the band live before this performance, but after seeing it I can truly say I saw Journey at its best.

Before the concert started I was told by someone else on our row that if you closed your eyes Arnel's voice sounded just like the old Journey.  Why close your eyes?  With them open you can see and hear that Arnel is Journey --

The set list included all their hits plus a few tunes from their 2011 Eclipse album.  Before I get to the set list, I want to talk about the fourth selection:  The Star-Spangled Banner.

The song was done well and I personally like the anthem as a guitar solo. Having said that,  as a veteran I can't stand the way people ignore the tune's significance by remaining seated, talking, or shouting while it is being played.  I would suggest playing as the first song of the evening with an appropriate "Please rise for the playing of The Star-Spangled Banner," preface or removing the song from the playlist completely.

What makes a Journey set list interesting is the mix of driving songs in their repertoire (like Separate Ways (Worlds Apart), Any Way You Want It, and Wheel in the Sky) along with slower deep meaning songs (like Lights, Open Arms, and Faithfully).   You can't just have a full concert of fast songs,  and their careful blending and mixing of tempos allowed you to recover emotionally from the fast songs so you are not always on the edge.  It provides a more rounded concert experience.    Aside from Arnel's excellent vocals I also, really enjoyed the Jonathan Cain keyboard work and solos.

For the encore, they played what I consider one of the most passionate songs in Rock & Roll history:  Lovin', Touchin', Squeezin'  -- the lyrics tell the story of a break up due to cheating but the longing in the melody and lyrics is just so relatable. In the end Karma takes her pound of flesh and levels the field, as Karma often does.