My Summer of Live Rock & Roll Act VI: This Is What the Truth Feels Like -- Gwen Stefani with Eve (It Can’t All Be Guitar Rock) 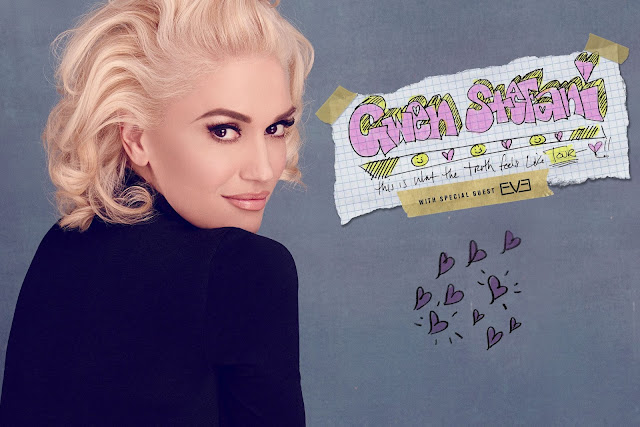 There are too many details as to how all this works to get into here, but if you are a veteran I would recommend you check it out and sign up.    Short version:  They go out and seek donations (and ask that you help), they have a fair way to make sure every Veteran gets a chance at what tickets are available and the manage the administration of the distribution of the tickets very well.  This was only my second event for which Vet Tix supplied admission, but they have recently started offering a lot more shows and events in my area.

I can listen and appreciate all music and my collection has massive variety, but Hip Hop is something I have only recently come to appreciate.  As a lover of ballads, I have begun to see the story telling connection between ballads and Hip Hop.  With that said, I can tell you that Eve is a Hip Hop artist and I enjoyed her performance.

The warm up was actually her DJ (Rough Rider) who got the crowd going  before Eve and her dance crew took the stage.

I liked her song Love is Blind, which dealt with domestic violence, Eve and She Bad Bad.  All three had tales to tell and I enjoyed the play on words to make the point.

Eve was backed by four dancers who were doing great moves and were almost like poetry.  One dancer (the brunette with straight hair) was awesome and flowed through every move start to finish. Great to watch….almost a syncopated ballet.

There were several songs I liked by No Doubt and part of the reason was Gwen’s voice and musical style.  I was looking forward to seeing her live and she did not disappoint.  What struck me most of all was her production values.

The show was slick and featured eight choreographed dancers in addition to the band, who also was moving to the music – especially the bass player.  First was Boston’s bass player and now this guy?  Next thing you know drummers will become respectable.  Gwen did at least five costume changes (that I noticed) and kept the audience fired up taking only one brief break while the band played an instrumental.

Of note from the set list: Baby Don’t Lie -- full of emotion and carefully crafted; Wind It Up – how can you not rock to a song that samples The Sound of Music?  Rich Girl (feat. Eve) – an old tune, but one I liked; What You Waiting For? -- the audience went nuts for this one; Go Ahead and Break My Heart -- from where I was sitting I could see a figure walking past the open backstage door a few times that I thought looked like Blake Shelton.  Indeed it was, and he came out to perform a duet that started with Gwen in tears and ended with the two of them in a hug; and the night ended with Hollaback Girl – She rocked it.

The best part of the evening was the way Gwen played to the crowd.  She made a concert with 15,000 or so people seem intimate because of the way she covered the house and spoke openly about how she felt about being in Detroit (her Dad is form here).  At one point she walked to left stage and told the crowd “I could get obsessed with you”, walking to the right she told those folks “I see you there, and I want to get to know you”, then returning to center stage told them “I feel like I already know you, but I want to know you better”.  She made the entire audience feel special – how can you not like that.

The encore included Truth, Just a Girl, and The Sweet Escape – my personal favorite and she did an extended version.  One great performance.  Thanks again to Vet Tix and Live Nation (who donated the tickets) for making it possible.

I have no problem with people moving from the back towards the front when there are empty seats available.  Why let them go wasted?  I do have a problem when those people act like complete and total asses once they have moved; disturbing and blocking the view of those who paid a much greater price for the assigned seats they are occupying.

There was a family sitting directly in front of me, with two small very well behaved children.   The kids could sit in their seat and see the show, no problem because several rows in front of them were empty.   As Gwen took the stage, two rather large women ducked into the row and took position directly in front of the kids, and rather than sitting down, proceeded to stand and dance until the final curtain call.  This blocked the kids view of the stage (and mine as well).

The father swapped the seats around so the kids were moved to the opposite side, so they could see again.   The show went on, then three more folks showed up from the back and took up positon directly in front of where the kids had been moved to and stood directly in front of the kids.  One of the three even turned around and looked down at the kid and laughed before turning back toward the stage.  So, again the view was blocked by some rude interlopers.

The father moved the kids out of the row (we were on the edge of the seat block) and stood in the aisle right next to his seats only to have security come over and tell him they were required to be in seats.  He moved back in and then let the kids stand on their seats.  They were so small, even standing on the seat they did not block my view.  Security came over again, and told him the kids had to sit down.  The Dad made them sit and the kids could see nothing but the asses of the asses who had snuck down into the seats in front of them.

Bottom line:  Either sit in the seats you paid for or act like you were raised with some modicum of manners by not making yourself a nuisance if you move to seats you did not pay for.  Don’t be an ass!