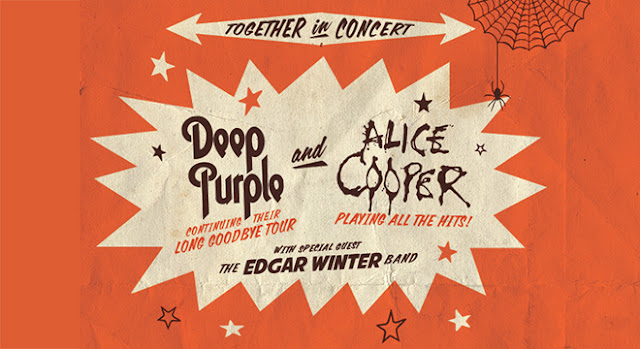 This show was the last for Summer 2017. It was also the best show I saw all summer. 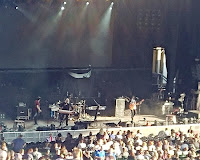 When I was in high school Edgar and Johnny Winter put out some of the best rock 'n' roll that was on the radio. I think both were underrated and I always liked the free-form bluesy feel they added to their songs.  Edgar Winter was a great opening act and while he only played five songs, each of them had a significant punch. He started with Free Ride and ended with Frankenstein.  From the first note to the last, there was plenty of time taken for the reinvention of each song and some really spectacular solos.

I thought Alice Cooper was the headliner for this show, given the fact that he was playing in his own hometown he rightly should have been. I've said it before:  I was never a big Alice Cooper fan when he was really big, but having seen him twice now in concert I have become a fan. I've talked before about the way he owns an audience from the moment he walks on stage until he takes the final bow. That is an absolutely true statement whether he is performing with the Hollywood Vampires or as Alice Cooper. The man is the best Showman in rock 'n' roll.

The playlist was filled with his biggest hits, including Billion Dollar Babies, Only Women Bleed, and I'm Eighteen -- all of which included the usual Alice Cooper frills of a guillotine, demonic ballerina, and an evil nurse with a large hypodermic needle. It was not just to show it was an event.

The biggest treat came at the dead center of the show when Nita Strauss, lead guitarist,  played what has to be the best guitar solo I’ve ever heard.  Notice that I didn't say the best female guitar solo  --  it was without a doubt the best guitar solo PERIOD.   She owned every string on that instrument, every fret, and put on the best playing show I have ever seen any guitarist ever do while pumping out awesome licks and sounds that were almost otherworldly.  Nita performance was overwhelming.

If you look at all of my reviews from last year, you will see that for almost every band I mentioned something about the bass guitar player. There was just a tremendous group of bassists last year who was flamboyant enough to be considered a large part of the performance beyond the part they were playing. Not so much this year, until I saw Chuck Garric.  The man played great bass and beyond that, he was truly a part of the show.

Likewise, I've mentioned many percussionists before – – but not so much this year – – until I saw and heard Glen Sobel playing in the background as well as his own drum solo. So much talent and such a treat to watch.

Alice’s encore was School's Out  -- and I can tell you without a doubt the man left it all on stage.

Most people know only one of their songs – – Smoke on the Water. I am not claiming much of a high road, because I can only add two to the list: Hush and Space Truckin'.  But, isn't that enough to make you want to listen to the rest of an album or a set? I'm glad I did, as I've added a few more songs my favorites from the band. Also, there was a terrific keyboard solo by Don Airey -- unlike many solos which have a tendency to go totally free-form his included bits and pieces from many different composers including Mozart.

The band was fired up, and so was the crowd by the time they took the stage. I hate it when a band holds their best hit until the final encore though, by then many bands are out of steam and have nothing left to provide in what should be the triumphant performance of the night. But I guess that is the difference between true road veterans and amateurs. I will tell you that Deep Purple did not leave it all on stage with that final song – – they borrowed some from the next show and found tremendous energy when performing Smoke on the Water and the crowd went wild.