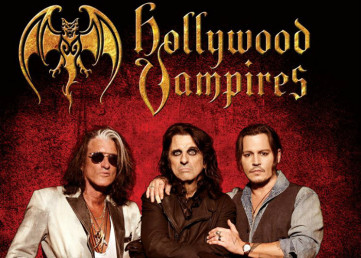 Attendance at this concert (and the Boston/Dennis DeYoung concert 2 weeks after this one) was a total opportune accident.  When I got an email announcing the Presale, I had no idea who the Hollywood Vampires were but what caught my eye was who was in the band -- Alice Cooper.  That caused me to look a little deeper.   I was not a big Alice fan but a chance to add him to My Summer of Live Rock & Roll was a good thing, so I got tickets.

The band was formed in 2015 and plays music by artists of the 70's who died young due to personal excesses.  The artists honored were prior members of a drinking club that was formed in 1968, known as the Hollywood Vampires (where the band derives its name).    A cool premise which kind of solidifies The 27 Club mythology.

My opinion of opening acts is changing and I am going to start expecting good performances from these acts in the future.  Andrew came out with electric energy and kept that high level of energy during his entire performance.  His voice will make him a star.  It was solid, strong and had great range.  He had great stage presence as well.

He played a few originals (check out Ghost My Head ) and a few covers.  Even with the covers he put his own spin on them and showed off his vocal range and capability.  As a result the audience was fired up.

He ended his set by dropping his guitar and walking off stage.  Normally I would have seen such action as immature and precocious of a non headliner; but in this case his performance was worthy of it.

No encore.  That would have been understandable if time was tight but there was 45 minutes between Watt and the lead act. Way too long.

I have never seen a personification of the phrase owning the stage until tonight.  Alice owned the stage.  He came out carrying a cane that he seemed to use to conduct the band and the crowd so we all rocked in concert.  Appropriately, Alice's outfit included a vampire neck bite and blood spattered shirt.  His voice was more mature and fuller than I had ever heard it.  Some things do get better with age; who woulda thunk that would include Alice Cooper?

Overall this was the best and most professionally run live performance I had seen all summer.  It was driving and in constant motion.  Alice almost consistently went straight from one song to the next without a break.  It kept things at fever pitch.  When he did take time to speak it was relevant to the music or to provide an explanation of who the Hollywood Vampires were and why.  He held the audience in his hand for the entire performance guiding the mood to ever higher plateaus as the evening went on. 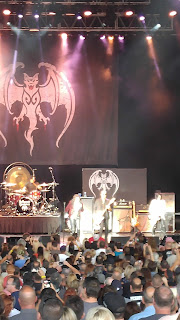 As stated Hollywood Vampires is about covers.  Among the best of the evening were: The Who's Baba O'Rielly - the Who reimagined with even heavier guitar and vocals.  The Beatles' Come Together -- the whole crowd singing in unison and fists pumping in the air. A smattering of MotorHead (in honor of recently deceased Lemmy Kilmister) and of course the sound of some old T-Rex.


Johnny Depp dressed the part of a metal rocker and pranced around stage playing with the fans in the front row.  He  was one of two guitarists playing rhythm guitar and sang background a few times as well.  All in all -- meh.  Depp did not contribute anything vital and (more importantly) did not take way from the performance. 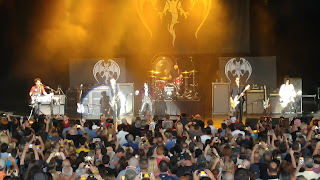 From time to time there have been actors who suddenly decide they are singers or visual artists.  Having lots of money and contacts allows them to pursue their dream.  Good for them; but at the same time their fame does not automatically earn them praise and adulation in the new field of endeavor.  I understand Johnny is a nice guy and visits Children's Hospitals while touring.  I can only guess that he is doing this for the new experience and maybe to help him emotionally distract from his recent divorce.  The most important thing to me was that he did not make the band's performance all about him or his fame, and he did not distract from the band's performance.

The final encore was a mashup of Pink Floyd's Another Brick in the Wall and reprise of Cooper's own School's Out.  It was an awesome experience that I will not forget.  The crowd and the band was one -- rocking out on familiar music and lyrics in a new way. 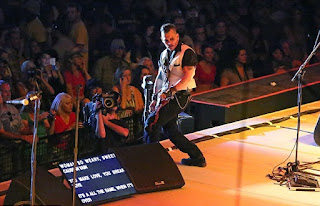 I found out later the band was using a floor teleprompter to help with lyrics -- to which I replay:  So what?  Having experienced issues with remembering lines from plays while on stage and lyrics (even my own) while performing -- I have a heart for anyone else with the same issue.  It did not take away from the show nor did it cheapen the performance.  Get over it.


If the chance presents itself, go see them -- you will not be disappointed.

During the concert they were offering United Shore Lawn seats to Boston/Dennis DeYoung for just $15.  I jumped on it and added another concert to My Summer of Live Rock & Roll.