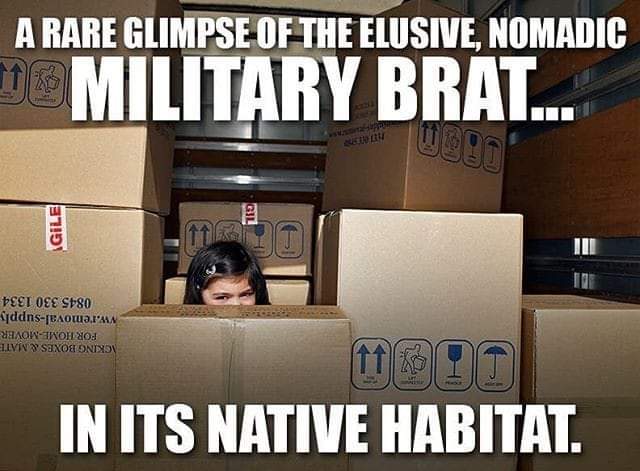 One of the few downsides to being a Military Brat is that you lack physical permanence. You know, everything that you own, including the house it is sitting in, is temporary or at the very least must be mobile. As I grew up, I kept the original boxes to pack them up when time came to move on to the next place. In some ways, it's a good lesson in minimalism because you evaluate everything you get through a lens of the item’s permanence in your life. Besides that, my dad never allowed us to hang more than one thing on a wall, using a single nail, which kept you from having too many things that needed to be hung. The real reason was that it prevented him from having to patch the wall or paying to have the base civil engineers repair it.

For much of my adult life, since I served in the military, I maintained this kind of mobile attitude. Even now, if you go into the storeroom, you’ll find the original boxes for many things I own, in case I have to box them up to transport them to a new place. I’m not really sure why, because even though I did extended tours in the Middle East, my home has remained the same for almost sixteen years. I think about this from time to time and have a reckoning that causes me to throw away a few boxes, but the rest remain.

This mindset of mobility probably caused me to avoid permanence in the mounting of my Lynyrd Skynyrd autographed guitar.  After bringing it home, I bought a display case, used a temporary adhesive to mount some interior lights, and taped a few additional items like the M&G passes, concert tickets, and commemorative brass plaque next to the guitar. Even my Skynyrd guitar pick collection was just woven into the strings on the guitar to keep it temporary. The guitar is mounted perfectly level inside the case to avoid drilling additional holes. The kick block for the bottom of the guitar is not secured at all, held in place by gravity. It is passable, but I was never really satisfied with this setup. 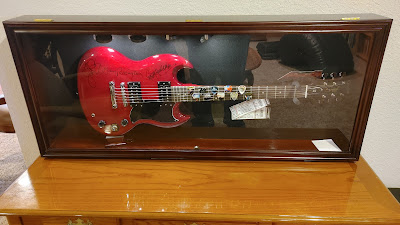 In the intervening years, the taped items fell off. The lighting was battery-powered, which required deconstruction to put in new batteries. A special lithium battery powered the remote for the lights — so I rarely turned them on. Some picks warped from the pressure of the guitar strings. I sat the display case on a table rather than wall-mounting it, even though it is unstable because of the flip-up locks on the bottom side.

I looked at it recently and couldn’t figure out why I didn’t fix things, even if it meant giving up the item’s mobility. So rather than just letting it go, I decided on a plan to improve the display while making it permanent.

The first step was to take out everything from inside the case. This included removing the guitar mounts—– I wanted to start with a blank field and plan out a new way of displaying the guitar.

I changed the guitar’s angle from level to a diagonal and centered the instrument horizontally. Then, I added some mounting foam to the guitar’s back, which brought the guitar’s body further out and added depth.

The light sets came from sfDisplay, a great company from which I’ve purchased several mounting cases and accessories. I really like the way the lights look, and they are also thin enough to not be overly distracting. In addition, each of the four lights can be aimed individually. The only drawback is the requirement of remote control and batteries.

Each light set requires six AA batteries, in banks of three each. Quick math will tell you that means each light pair requires 4.5 volts. I was battery replacement kits, having replaced batteries in several accessories in my home. I just needed to find the right one. The Gerson 93974 - AAA Battery Replacement Power Supply is a perfect match, giving me five separate leads, with each supplying the required voltage. 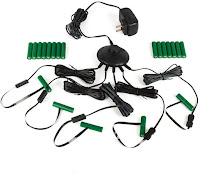 NOTE: I am supplying this link to Amazon for reference. I can’t recommend buying it from any of the sources available. This was by far the most cumbersome item to get for my project. I ordered five of them through Amazon only to have each change delivery date from the one day promised to four weeks or more. Eventually, I found the item on eBay, but that source no longer has the part in stock.

With power needs handled, I needed to remove the need for the remote, as I planned to use a Smart Plug to control the lights. This required me to rewire each light set to always be on. I won’t go into detail, but it took me under ten minutes to rewire each of them, including the time necessary to remove/replace the twelve screws holding the unit together. A straightforward job.

Luckily, I had a Leviton Smart Plug on hand to provide lighting automation. I am surprised to see how its price has gone up. 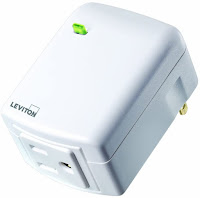 The brass plaque inside the case was deeply scratched, so a replacement was needed. The new one came from sfDisplay, who created and delivered it in under a week.

I stripped the old adhesive off the tickets and M&G badges — the warped guitar picks went into a vice to help flatten them to allow for proper mounting. One problem I ran into in doing this was the amount of dust and extraneous schmutz that seemed to multiply all over the black velour background of the case. So I tried a lint roller and, failing that, I went to my trustee Pet class Dyson stick vacuum to get rid of it. I also took the opportunity to clean both sides of the Plexiglas.

Since I was not using the flip-up locks, I removed them to no longer cause an issue with the case’s balance. Unfortunately, this left a problem with the key-lock hardware. To add sufficient height, so the key-lock was not touching the tabletop, I attached chair leg footpads on the four corners plus two in the middle. This added stability to the case and prevented the table from being scratched by the case’s hardware. 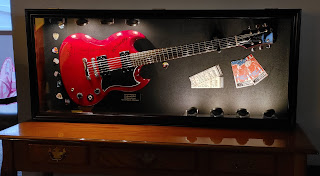 When the Gerson unit arrived, I installed and tested both light bars to ensure everything was good. Because of each connection’s six-foot cable length, I removed the unused lead to eliminate clutter. After drilling holes through the back, I passed the power lines through and then secured them with Gorilla tape.

After adjusting the lights, I brought the bottom of the guitar out to add a slight inward tilt at the top to show off the autographs better. Next, I placed the plaque, tickets, and VIP passes under the guitar’s neck and positioned the picks along the left end before vacuuming out the case and cleaning the Plexiglas once more.

After closing it up and putting it back on the table, I made several adjustments to the angle of the lights to make them more targeted and eliminate flare. Then, after plugging it into the Smart Plug, I programmed it to turn on the guitar’s lights when someone entered the room, turning off automatically nine minutes later.

Voila! My Lynyrd Skynyrd guitar is now permanently mounted, and I think it’s much more attractive than when I started. 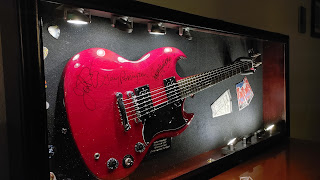 As I stand and look at my completed project, I have to admit that after patting myself on the back; I mentally plotted out how to prepare the guitar for eventual transport. Since everything is firmly mounted, I can stuff it with bubble wrap and place a piece of cardboard over the Plexiglas to keep it from getting scratched before wrapping it in a moving blanket. Apparently, my Military Brat culture will be with me for the rest of my life.

I don’t think that’s such a bad thing.