With Paradise In Sight, She Cried Out "Stop Right There!" 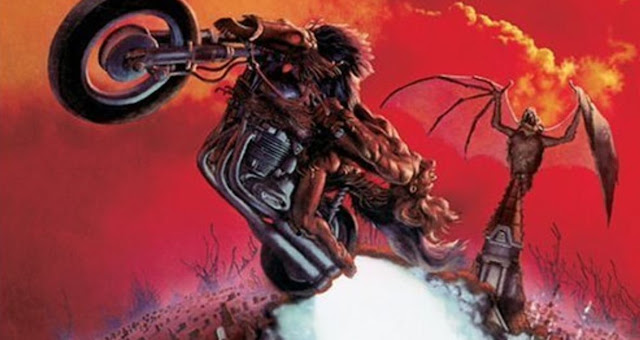 I remember the first time I saw him; I’d just gotten home after a date and after flipping the TV on, I settled into my dad’s recliner. As fate would have it, the TV came on just as he put the microphone to his mouth and began singing. The music had a driving rockabilly rhythm to it, but his voice didn’t touch that era at all. Unlike a lot of the rock musicians of that era, who had long hair, his hair was wild and straight and he wasn’t exactly good-looking or skinny and he held a red scarf. Ignoring all of that, his voice was exceptional. Before he sang the first two lines of the song, I knew I was listening to something totally unexpected and spectacular.

I’ve always been about songs that tell stories, but this ballad was on a whole new level. I had seen Phantom of the Paradise, Tommy, and Jesus Christ Superstar so I knew what a rock opera was. This was a rock opera, but somehow, it’d been condensed down small enough to be a feature on whatever program was on that night. As I sat listening to him belt out the lyrics of Paradise by the Dashboard Light, the entire evening I'd lived was being played out in the song's lyrics. It was as if the songwriter had been along on my date and wrote the events as they happened so that they could be played back for me afterward. Then, just as the events were sliding into home, the lyricist took a fresh track apart from my reality as the girl demanded straight answers as to what he was promising.

As I watched this play out on the screen, my mind split the song into three separate acts as the rhythm, seriousness, mood, and story within the music changed: Part One — A passion fueled search for Paradise, and the process of finding it, complete with an instrumental that included a play-by-play by a sportscaster. Part Two-- The girl stopping it all with three words – Stop Right There! Then she demanded answers to the questions she had before letting it go any further, as he stammers, trying to figure a way out. She also demands a promise which he eventually gives. Part Three—The aftermath and he regret he had for making that promise. All of that drama and passion covered in just eight and a half minutes. Damn!

I’m not sure what program I was watching. Originally I thought it was Saturday Night Live, but I could never find a reference where a performance of that song was performed on the show until years later. The only important part that, aside from the perfromance, was the singer’s name: Meat Loaf.

Unlike today, when you can immediately online and find recordings and videos of an artist instantly, there was no such animal in the late 70s. I called the radio stations I listen to the next day, but none of them had even heard of the song. It wasn’t until years later that I found out that the song, composed by Jim Steinman, had been released almost a year earlier under a different title. Then, Meat Loaf got an album deal, and it was added to the first album of his that I ever bought: Bat Out of Hell.

Another thing that differed between that time and now was there was no way to skip easily from one song to the next, unless you were skilled at lifting and sitting down the needle on an album as it spun or willing to sit through a tape being rewound or fast forwarded. That meant I listened to every song on side to repeatedly. Another song that eventually made it big, Two out of Three Ain’t Bad, was also on that side of the album along with For Crying Out Loud. Side one had two great songs on it: Bat Out of Hell and You Took the Words Right Out of My Mouth (Hot Summer Night) but Paradise by the Dashboard Light was always my favorite.

Paradise has remained on my list of all-time favorite songs. A few years later, Meat Loaf surprised me by appearing In the Rocky Horror Picture Show as Eddie, he was great in for a big guy he moved gracefully.

Eventually, Meat Loaf released his second album, which included what many say is the next act of Paradise: I’d Do Anything for Love (But I Won’t Do That). Another tremendous song that held a dramatic story within it of heartbreak, romance, and desire. A similar theme, but more mature in its view of passion and love.

Today, Marvin Lee Aday, who I and millions knew as Meat Loaf, passed away — but his music will live forever.

Email ThisBlogThis!Share to TwitterShare to FacebookShare to Pinterest
Labels: meat loaf, paradise by the dashboard light