The Tiny Library -- It's a Magical Place 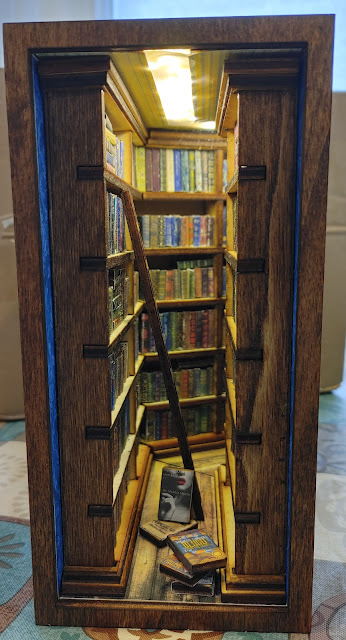 I am not a crafty person...

That is the opening line from my review of an item I bought on Etsy from Katrin Schilke, a vendor in Hamburg, Germany. Maybe I should back up and start at the beginning.

I fell victim to a pop-up ad that appeared on a webpage I was viewing. It was hawking an item it referred to as a book nook. The book nook in its simplest terms is a diorama, about a foot tall by three inches wide. It was geared toward Diagon Alley from Harry Potter, so it replicated the feel of the alley to include the stores on either side. It appeared to be lighted, and because of an angled mirror at the back of the note, it had the illusion of going on into infinity.

Now, when I say I had fallen victim, I meant that I actually stopped and looked at the ad and then clicked on the link. The pricing of the item was far cheaper than it should’ve been for something so intricate, so right away my scam radar went off. However, my interest did not wane, and I knew that if this scam existed the genuine item had to be out there somewhere. So, I began my search.
There are hundreds of vendors out there selling various versions of these dioramas. The themes run the gamut from Star Trek, to Lord of the Rings, to a basic wizard’s layer. However, the pricing was outrageous. The price went from under fifty dollars for the item I saw in the pop-up ad, to over three hundred. One item I looked at had two prices, one for the item arriving preassembled and the other for a kit. The kit was roughly a third less. I changed the parameters of my search, ran it again, which brought me to Katrin’s shop on Etsy.

Katrin offered basic library kit with bookcases on either side and a ladder to help a reader get the top shelves. I was instantly enthralled, and the price was reasonable for what the kit included. I ordered it. I will say that the shipping cost almost made me cancel the order. It was not excessive for items being shipped from Europe, just more than I was used to paying.

While waiting for my tiny library to arrive, I planned out where I was going to put it and how to add the functionality I wanted to the LEDs mounted inside. After selecting an appropriate eye level spot on a bookcase, I looked at the ad for the nook more closely. I realized the light switch was on the top back corner of the book nook. Because the shelf I planned to put it on had a low clearance, I would have to slide it out to turn it on and off. That was a nonstarter. 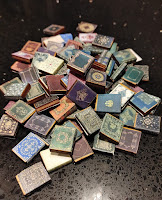 Rather than trying to replace the battery compartment with some sort of remote control, I replaced the batteries with an electric converter and a Smart Plug. This accomplished two things: I no longer had to worry about batteries going dead or leaking inside the item and I could turn the diorama on and off using my smart home system manually or by programming.

When the box arrived, I opened it, and was amazed at how efficiently the thing was packed. Obviously, Katrin plays a lot of Tetris. I pulled all the items out and set them on the table. The first step, per the instruction sheet  (English) was to assemble the 450 individual books that came with the kit. There were three small bags of wood and squares meant to represent small medium and large sized books, and several sheets of book covers. Basically, I had to cut out each book cover and glue them to the small squares that would represent books inside the nook. This was the most time-consuming part. 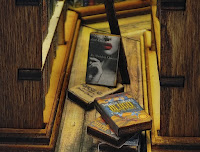 I broke the task down by assembling a few at a time until they were all complete. While doing this, it occurred to me that I could include my own titles in the library. So, I made some adjustments to the cover graphics for each of my six books and substituted a few of the provided covers with them.

When the bookcases were complete, I glued them into the case of the book nook and then placed the ladder. Rather than hiding the miniature versions of my books on the shelf, I stacked them up on the floor to make them more visible. I added the battery kit to the case before placing the diorama in the empty spot I made on the shelf. Now, whenever anyone enters the room, the lights of the tiny library come on for about four minutes, then turn off. I didn’t realize it until afterward that my bookcases are so full when the lights go off the tiny library almost vanishes into the books beside it.

Of course, my Etsy review was five stars. The kit was wonderful, and on the one instance I needed help from Katrin responded quickly and answered my questions thoroughly. Even if you’re not crafty, I heartily recommend building one of these. It is satisfying and you wind up with an interesting piece of art afterward.

My granddaughter is mesmerized by the little library, and immediately does to it whenever she enters the room. She has asked me what is beyond the turn at the back, since the mirror gives the illusion that the row of bookshelves goes on forever.

What’s back there?  More books, of course, and they're all full of magic.

I wonder where I can get a kit for this? 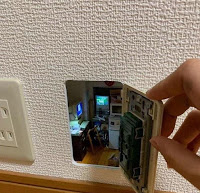