Hey, That's My Name Too!

In my current work in progress (WIP) all of the main characters have nicknames. Since they're computer hackers it's not unusual that they would be hiding behind an alias to keep their true identity secret. In the story, all of the names were assigned by the alpha hacker in their group. Behind each name, is a short back story as to how they wound up with it. These backstories tell you a little about the person given the moniker and the person who handed out the names. 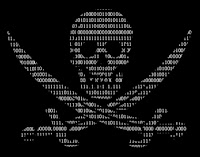 When I was thinking about this part of the story, my mind drifted to the nicknames I'd been given over the years. The first name I can recall being was tacked on me at summer camp when one of my fellow staff members began to refer to me as Socrates. For some reason, I was mouthing off philosophical platitudes in the name was slapped on. Given that I was in eighth grade at the time, I'm not really sure how I came about any level of wisdom.

There was also a span of time between sixth and eighth grade when I chose to go by my middle name rather than my first name. We'd just moved to Oklahoma from South Carolina and it was a good time to make that sort of change. Looking back, I can't remember why, I just that I did it.
By the start of ninth grade, I was back to using my first name, but my friends were still calling me Socrates. It was okay, I was hanging out with guys named Duck and Peabody -- it fits. A move to Virginia allowed me to shed all nicknames.  I didn't pick up another until I was in college.

The TV show MASH was popular at the time, and my offbeat sense of humor led me to be called Hawkeye. The nickname stuck through college, my first few years in the Air Force, and I eventually used it to sign artwork I created during that time. Once I set the name down, I didn't pick up another for many years. I still have college friends who call me Hawkeye, and I wouldn't have it any other way. I'm just glad that after all these years we're still friends.
At this point in life, I no longer have any nickname, but I do have a nom de plume I use for my fictional writing. I created it primarily to prevent confusion with software and technical books I write under my real name. It also allows me to me hide behind the curtain while I play with the knobs and levers that control my characters as they perform on the stage.
Just wait until you meet Lynx, Spyder, and a few others.
364,819