Roll On Thunder, Shine On Lightnin' 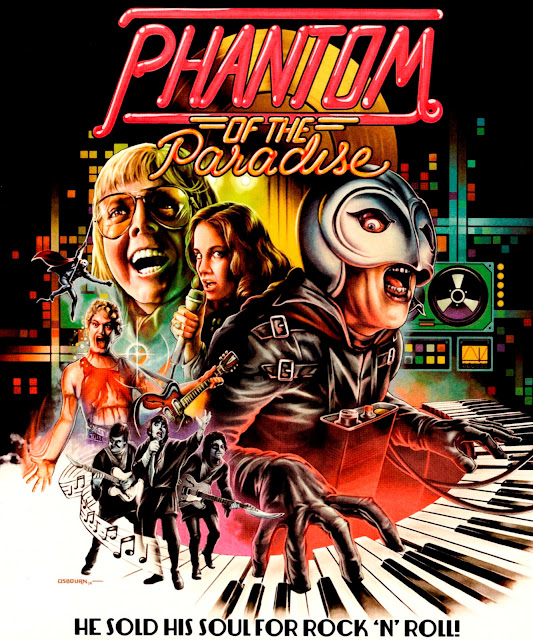 If you ask a person what their favorite movie is, the answer would probably change in ten years. It is not disloyalty; naturally, your evaluation of a particular film will change over the years. Sometimes it gets remade, sometimes it doesn’t age well, and sometimes a movie just hits you at the right point in your life to make a significant impact. Nothing else ever really matches that level ever again. For me, that movie was Phantom of the Paradise. I am warning you upfront this entry about this movie, released in 1974, may or may not contain things you consider a spoiler. Since the film has been out of theaters for almost fifty years, it is beyond the time when that should be a concern.

Because I was a military brat, it is not surprising that this movie, like most others, was seen in the base theater. Like most installations I lived on, the theater on Fort Eustis was located within walking or biking distance of the housing area. Because I went to this movie with a larger group of friends, we walked en masse to the theater rather than taking bikes. As I remember it, Phantom was the Saturday late-night movie which meant there weren’t very many people in the theater. Like many movies I saw during that time in my life, I had no idea what I was walking into. Usually, by the time a movie made it onto the base, it was a year or more since it’d been released off base. All the advertising was gone, and back then, the base theater didn’t show previews most of the time.

Phantom of the Paradise is, in the simplest of terms: Faust, mixed with Phantom of the Opera, and a dash of Dorian Grey set to Rock & Roll from 50s to metal with an intro and epilogue by Rod Serling plus a villain/hero with stainless steel teeth....the whole thing is presented in classic Brian De Palma split-screen. But that is the simplest of terms. To me, at age fifteen, it was so much more.

The hero of the story is a composer named Winslow Leech, who is having a rough time getting his music heard. His current project, a retelling of Faust. The person who controls the entire music industry is an egotistical villain named Swan. He hears Winslow’s music and decides, rather than buying it, to steal it. When Winslow tries to get his music back, he meets an attractive singer named Phoenix, auditioning for his cantata that Swan is now producing. Naturally, she has the perfect voice for his songs. After several attempts to confront Swan about the theft of his music, Winslow ends up jailed and accidentally, through a quirk of fate, has his natural teeth replaced by stainless steel. Admittedly, that is a strange sidetrack for the plot to take, but there it is.

Eventually, due to his superhuman strength when angry, he escapes prison. He attempts to destroy the factory producing an album of his music, sung by Swan’s house band (whom Winslow loathes). It does not turn out well as he ends up being maimed and left voiceless by the record printing machine he is attempting to destroy. Swan creates a rock ‘n’ roll venue called The Paradise (Not the one Styx sang about). Winslow sneaks in, steals a costume, and becomes the Phantom, causing mayhem in the theater to prevent the opening of the Faust cantata. Are you with me so far?

After the Phantom takes out Swan’s band, they meet and make a deal. Swan gives Winslow an electronic voice. He will produce the Phantom’s cantata -- the price, as usual in fame and fortune contracts, his soul. Phoenix appears at an audition and is selected at Winslow’s urging. Swan locks the Phantom away in a studio vault so that he can complete Faust while feeding him a variety of pharmaceuticals. Once the music is finished, Swan bricks the Phantom into the studio a’la Cask of Amontillado. He then selects a male lead, Beef, for the show but leaves Phoenix as a background singer. The Phantom’s immense anger allows him to break through the brick wall, and then he kills Beef on opening night, which leads to Phoenix taking over the performance. Later that night, the Phantom witnesses Swan’s seduction of Phoenix, breaking his heart.

I won't give away the ending.

If you followed all of that, you could see how it’s a short jump from that story to one of any average teenage males growing up in America in the mid-70s. I was at a point in my life when I saw the movie that I had been through several Phoenixes and had been blocked and torn down by a few Swans. Short of selling my soul to the devil, I could identify with all of the emotion and lovelorn helplessness of the Phantom. 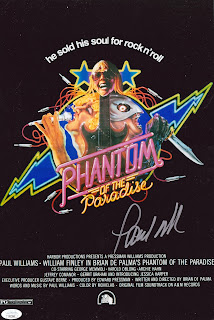 When the movie finally showed in the base theater, the first home VCRs were still five years from release*. Once the film was gone from theaters, there was no way to see it again until it appeared on TV years later. At this point, I had seen the movie once, and it made an impression. What solidified it was a bit of chance.

A long time ago, radio stations would give away things based on what number caller you were when they told you to call. A few months after seeing the movie, I was the correct number caller to win a free album of my choice at a local record store. Guess which soundtrack had just arrived when I came to pick up my free album? Ain’t kismet neat?

I listened to that album over and over and over. I knew all the words to both the serious ballads and a playful number about a rock musician who committed suicide to pay for his sister’s operation (more details on the impact of that particular song here, see the Umleitung).

Paul Williams, although not a great vocalist, is a fantastic songwriter. His lyrics are excellent and managed to say things in rhyme and metaphor that most people can’t say plainly. As I listened to the album, I found more parallels between the movie and where I was in life. Every adolescent does the same thing. Like movies, it’s just a matter of which album hits you at the right time. There wasn’t a single line from the album that didn’t somehow fit into what was going on in my life for at least the following year. I guess I had enough innate optimism to see their hope, even if some were meant to be melancholy. Jessica Harper had a beautiful voice that blended so well with the emotion-filled lyrics being sung.

The movie was nominated for several awards, including an Oscar, but it became a victim of timing. The same year Phantom of the Paradise was released, Tommy came out. Tommy was a good movie, and it had a stellar cast: the Who, Elton John, Tina Turner, Eric Clapton, Jack Nicholson, and Ann-Margret. There was just no way this little movie would win over Tommy. Phantom was the better movie with the more meaningful soundtrack of the two.

...years later, and every now and then, when I find myself needing a little something – – I head off to the Swannage to watch a film about a sound. The search for that sound -- the man who made it, -- the girl who sang it, -- and the monster who stole it.

*Home media side point: Phantom of the Paradise was never released on VHS and didn’t come out on DVD until September 4, 2001. In August 2014, it was finally released on Blu-ray. While in Okinawa, during a typhoon evac from Guam, I came across a copy of the movie on VHS in 1983, complete with forced Japanese subtitles. The tape was lost during one of my many moves.

This was the last thing Rod Serling ever recorded.