When I got my first car I was like every other teenage boy. Even though it was a rustbucket and had serious mechanical issues I saw fit to add every piece of chrome and useless piece of fluff that I could find. When the transmission finally gave out, I figured I had spent three times the pruchase price of the car in add-ons.

I was determined not to do that with the bike I had bought to learn on. Of course I was going to allow myself to go completely crazy when I got my real bike later. However, there are some things that needed to be done and since they needed to be done there was no reason why they could not be done with a bit of flair. 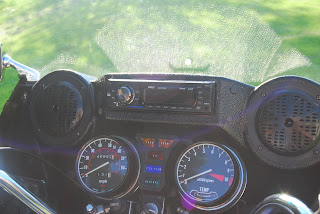 This is what add-ons I have from the bike that's far:
Stereo System. I had this in mind from the minute I bought the bike. Once I figured out that a marine radio would work as well as a motorcycle radio for a lot less money I found one rather quickly. Once I got the unit in, I realized that the cover that came with it was too large for the console housing and also the speakers that came with it were also too large to fit. So I sold both of those items and bought a smaller set of speakers. In the end the radio with speakers cost less than $15. Source: eBay

Lucite Windshield. This was nowhere in my original game plan for this motorcycle. Then the first time I rode the bike towards the sunset the entire windshield frosted out due to the numerous scratches and glare -- this was a safety issue. Source: eBay

Driver Peg Rubber. Another safety issue since the ones that were on there were torn and my boot got caught on them quite often. Source: Biker Bandits 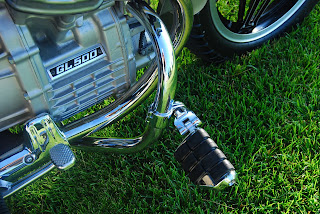 Kuryakin Highway Pegs. This was not my original game plan either, but I had no choice when I went out one morning to adjust the original pegs and had one of them break off in my hand. Since I use highway pegs for a lot of my riding this was necessity. Source: Crowe's Custom Cycle

GPS Mount. This was an inexpensive mount that allowed me to put my Tom Tom on the handlebars so I could use it while riding. The one I got was a lot cheaper than the one that Tom Tom sells. Source: Express Mounts

Vista Cruise Cruise Control. There was one on the bike when I bought it, but it broke. Since I liked having my right hand free from time to time while riding I got a new one. Source: California Cruising 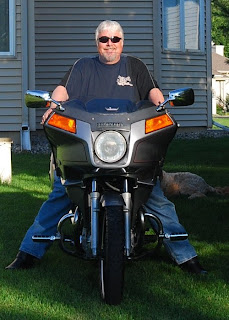 Battery. I quickly found that it took more than two tries to start the bike, the battery would be dead. So, rather than trying to fight with it I bought a new one. Because the new battery was an AGM I was able to get rid of the battery acid drain tube which was a good thing. Source: Batteries Plus
Mirrors. After buying the bike I noticed that one of the mirrors was extremely loose and would not stay in adjustment. After I made several attempts at tightening it I gave up and bought a new set. Source: eBay
Lighter & Electrical Wires. Since I was going to use a GPS I would need a way to charge it, so I replaced the nonworking cigarette lighter. I also needed various electrical wiring to install the stereo. Source: Auto Zone
Tools. I suddenly found myself pulling off various nuts and bolts, tightening things down, and changing stuff. I quickly realized I needed a set of tools that were metric. Since I'm not a pure mechanic, I bought some inexpensive ones. Source: Target 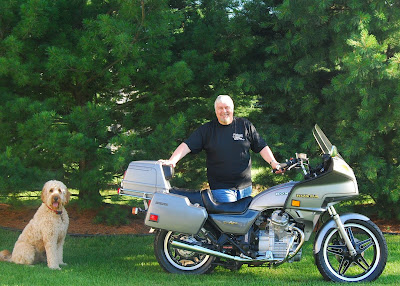 Finally, after I added all of that I had the bike detailed to get rid of the years of neglect. She's gorgeous.