I will admit that I am not a breast man. I have an appreciation for gorgeous eyes, sexy smiles, nice legs, shapely ass, wonderful curves, well -- -- more the whole package than just the breasts. However, I am opposed to anything that harms  -- so I am opposed to breast cancer. So, when I found out about a ride called Bikers for Boobs I was immediately interested.
When I got up on the morning of the ride and went outside to look at the weather it was raining. So, I fixed myself another cup of coffee and watched the news. Since the starting point for this ride was almost 40 miles away, I had to leave by a specific time in order to make the start of the ride. When that time came, I went and looked again. The rain had stopped, and the skies had cleared. Seeing that as a good omen, I mounted the bike and headed east. 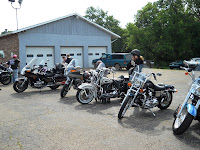 The ride over was uneventful, in fact the highway was more or less deserted but it being early on a Saturday morning I guess I was not too surprised. With the sun shining in a dry road under me, I enjoyed every minute of it, even if I was on an interstate.
Once I found Backdraft Custom Cycle, that was sponsoring the ride, I pulled in and parked. This ride was going to be a lot different from the last one I had gone on. For one, there was a wider variety of motorcycles than just Harleys. There were several trikes, CanAm, and some Gold Wings. As usual, I was the only Silverwing in the crowd. 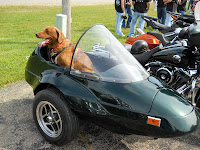 I signed in and then wandered around among the bikes out front. I did come across one fellow who was riding with the sidecar for his dog. He said the dog seemed to like it. The dog had his own harness that attached the seat belt in the sidecar that kept him from jumping out. I probably would need something similar for MacBeth.

The ride itself was somewhat nice it was through a lot of farm communities and a couple small towns. Mostly people waved as we rode past, from what I understand were about 100 bikes on the ride so we probably made a bit of noise on a quiet Saturday afternoon. It was still kind of fun rolling hills a few good curves and most of all nice weather. We did not really go too far and ended in a campground was holding something called Thunder on the Grand. 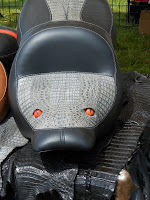 The only part of Thunder on the Grand I really saw was the vendor tents along the dirt road. I did buy keychain for the Silverwing and a T-shirt but that was about all. I did see some interesting saddles and some woodcarvings done with a chainsaw.
I ate a quick lunch of grilled chicken and a hot dog before mounting up and running home. 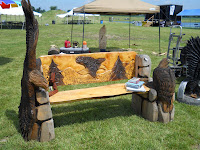 The ride home was uneventful but it was extremely warm. The sun seemed to be down right on me as I rode along and unless I was moving, I quickly found myself with sweat running down into my eyes.
Overall, the ride was a good day, until the last 25 or so yards on the way home when the bike slid out from underneath me. But that is another blog entry.
Post Script: I have worn my Bikers for Boobs T-shirt a few times since the ride.  I seem to get the most comments from young women -- and they are all very positive about the message and the cause. 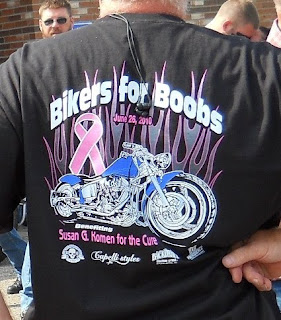