After I completed the Bikers for Boobs ride, I was heading home and on the main road that turns onto my street. Recently the main road had been chip and sealed; a process where liquid tar is applied to the road and then covered with loose gravel. The bad part about this is that a lot of the gravel is loose and as cars go by it flies off to the side of the road. For spots where a street intersects with the road that has been chip and sealed, the loose gravel tends to pile up across the street. This means that in order to turn from the main road onto the street you end up crossing a ribbon of gravel.

When I turned onto my street that day I noticed that there was more gravel on that ribbon than there had been previously. However, it was too late for me to reduce my speed further or to avoid that particular place. Therefore, when my front wheel hit that gravel the wheel lost his traction and started to slide sideways causing the bike to fall to the right.

I used the techniques I learned in safety class to try to recover from this and did manage to right the bike just as the back wheel hit the same ribbon of gravel, which threw the bike down on its left side. I could not recover that. Once I was on the ground, I was immediately able to get right back up and I turned off my still running. I felt pain on my left knee, but my jeans were not torn and there was no blood coming from it. My left hip was also sore, but again my jeans had not torn. When I inspected my hip and knee later, I thoroughly expected to have some serious bruises but I had none at all. 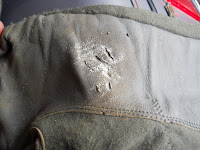 My son was pulling out of that same road and saw what had happened. He came over and was very upset because it scared him when he saw me go down. He helped me pick up the bike and I got back on it and rode it the rest of the way home. When we talked later, he told me how scared he had been and I told him that everything that we had done as a precaution had worked:

Gloves: The leather palms prevented my hands from being scraped up, when I instinctively reached out during the fall. 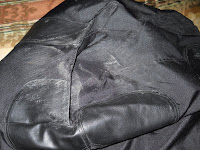 Cordova Jacket: Protected my shoulder and elbows when they hit the ground from getting a severe road rash.

Jeans: Protected my knee and hip when they hit the ground.

Crash Bar: This kept the bike from falling flat on my leg, which might have trapped it, or caused the exhaust pipes to burn me. 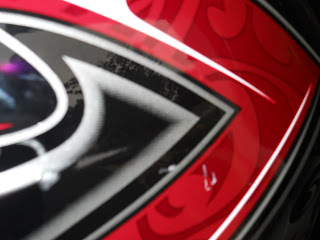 Helmet: I do not recall my head hitting the ground, but it must have based on the scratches that were on the helmet after the fact. If I had my head hit versus my helmet, I am sure I probably would have had at least a mild concussion and probably some good lacerations.

Boots: The boots protected my ankles when they were caught between the bike and the ground. I don't think I would've broken the ankle, but I probably would've sprained it. 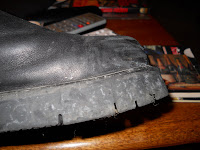 As far as the bike went, the damage was really somewhat limited because of the highway pegs and the crash bar; these prevented the bike from hitting the ground except at the outmost contact points. The peg was scratched and had to be readjusted, but it was not bent. There were no marks on the crash bar. The cowling molding suffered some minor tearing, but nothing very drastic and one of the rear reflectors was cracked and would need to be replaced. 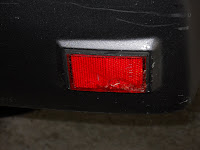 As falls go this one was not too bad on the bike or me. What it did do was prove to me that all the safety precautions that I take every single time I ride work.

Aside from the gravel, there were two other factors at play here, which might have contributed to what happened. As I said in my prior entry about my ride home, the weather was hot and I was dehydrated and overheated. I probably should've stopped at some point on the ride back and gotten some water before continuing home. I'll know better next time. Those factors might have slowed my reaction time.

I did write a letter to the mayor about this chip and seal process and what a dangerous condition it leaves for motorcycles. She actually contacted the road engineer who came out and cleaned up all the loose gravel that formed the strips across all the streets off the main road. That fixes the problem this time.