It all started when I was standing on the front porch staring at the yard -- contemplating things. The weather was clear, the sun was shining, the heat had not really gotten unbearable yet, and there was the smell of science in the air. With only a 20% chance of afternoon thundershowers, the time was right to walk from where I was to the Deck in the back of the house where I could consider life's mysteries while sitting in a chair,  perhaps while sipping a nice cool drink. 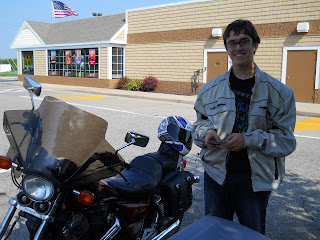 As I walked past the garage, I noticed the SilverWing and Shadow sitting there and decided that riding a motorcycle might be a better than walking all the way around the house. I called my son to join me and then we mounted up. I programmed the longitude and latitude of the Deck’s location into the GPS and at 0830 we took off down the driveway.
We rode East first, going towards Hastings. Not sure how or why I picked East since the Deck is on the West side of the house, but hey you have to be willing to take the risks to further science. When we arrived in Hastings, I thought better of this particular routing and headed off towards Ferrysburg, which was at least West of where we were. We stopped along the way for gas and water since the temperature had started to rise. 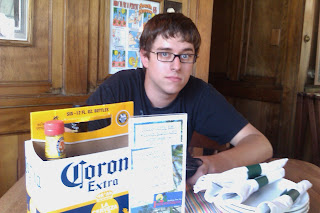 When we left Ferrysburg, we headed South. It just seemed like a smart direction to go in and the GPS at this point was getting more and more confused – must have been some kind of magnetic vortex, so we turned it off. We stopped in South Haven at The Idler and had lunch—sitting at the exact same table where Albert Einstein once sat as he pondered his theories. We felt the flash of inspiration and developed our own theory about what to do next. We mounted up and went South to Benton Harbor. Why? Because my son wanted to buy a new riding jacket and he once saw one there on sale.  Since he is my son and a relative – this became our Theory of Relativity. 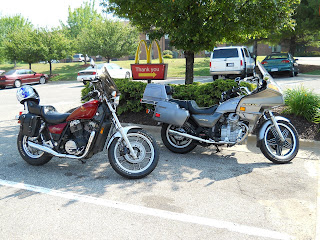 From Benton Harbor we headed North, a direction that we had not traveled in thus far. Since we came from that direction moments before it was kind of boring, so we turned the GPS back on and then followed its instructions to go East. This made no sense to me at all since I knew the Deck was on the West side of the house, but the GPS was pretty insistent…at some point we had to start trusting technology. Rather than going on the Interstate we took the Blue Highway along side of it and waved at folks as we passed through their towns.
After another 70 miles or so we found ourselves back in the drive way but this time the bikes were pointed West, which seemed to be the right direction. We dismounted and continued traveling West until at last we found the Deck. It took only 9 hours to get there but we made it. I opened an ice cold beer and took a long drink as I wondered how the distance between the front porch and the deck could possibly be 270 miles – some things man is just not meant to know.
What the hell, it was a good ride, even if it ain't good science.